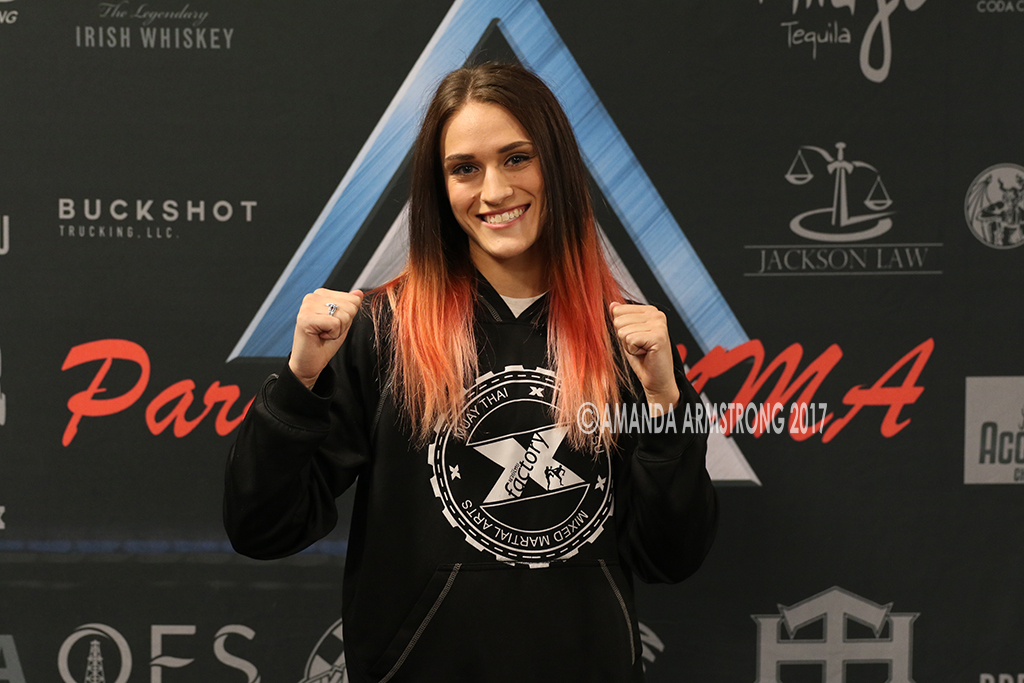 An avid participant in sports since the age of four, Brittany Boone was quite familiar with the old axiom “practice makes perfect.” So when she followed her boyfriend, UFC welterweight Brian Camozzi, into training for a career in mixed martial arts, she adopted the same mindset.

“He was already doing [MMA] when I graduated high school and told me it would be a fun way to keep active,” Boone told Combat Press. “I figured that I was used to practicing every day anyway for games, so now I wanted to practice and have a fight.”

Boone, 25, trains with Camozzi at Factory X Muay Thai in her native Colorado and has made physical fitness and activity into a lifestyle. Besides her career as an amateur strawweight fighter, Boone is a certified massage therapist and owns her own business, B Sports Massage. She splits real estate for her business out of two locations: RX Sports Recovery and 5280 Balanced Health Center.

“I used to work at a spa that did more Swedish massage and pampering,” Boone said. “I decided I wanted to work on athletes instead, and now I work on football players, track stars and MMA fighters.”

Which is probably a good thing, as Boone juggles owning her own business with her burgeoning fight career. Boone has compiled a 3-2 record as a strawweight fighter and has won her last three fights. She’s slated to face Cara Greenwell, who is undefeated through two outings, at Paramount MMA 7 on Friday, March 24, in Denver.

“She’s probably a better striker than me,” Boone said. “But I heard she doesn’t like to be pressured and when she is, she likes to press you up against the cage. So this will probably end up being a striking match, which is fine with me.”

Boone prides herself on her striking. She won her last fight via TKO following a liver kick. Boone also worked with Invicta FC interim featherweight champion Megan Anderson to prepare for her fight against Greenwell.

“I try to put on exciting shows,” Boone said. “People also tend to underestimate my ground game because of my striking. But if you want to take me down, you have to get there first. I’m using my strikes to keep you away and hopefully knock you out. I’m always looking for finishes, whether it’s with my striking or on the ground.”

Boone believes she’s still a fight or two away from turning pro, but it’s ultimately a decision she leaves up to her coaches, which include Camozzi and Marc Montoya. In the meantime, Boone will continue to ensure that practice makes perfect. She’ll also take joy in being active in her home state by not only training and providing massage therapy, but by enjoying the great outdoors and going camping and paddleboarding with her sister.

“I’ll see where my immature career goes from here,” Boone said. “I’ll potentially go pro this year, and 115 pounds would be my preferred weight class.”

Brittany would like to thank her Brazilian Jiu-Jitsu and judo coaches, as well as her coaches and teammates at Factory X Muay Thai. She would also like to thank her sponsors, including LiveWell Colorado. Follow Boone on Twitter: @Sloth221
Advertisement