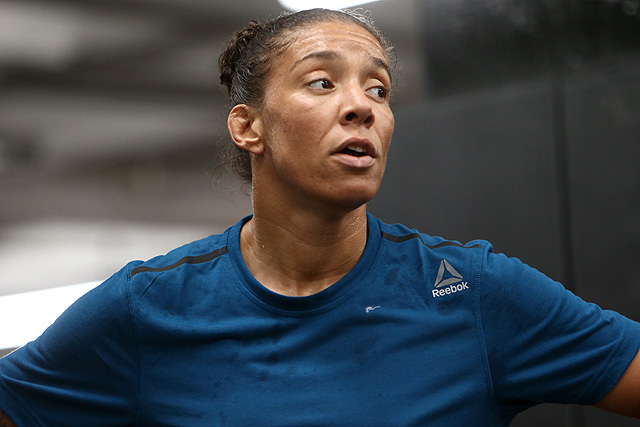 Germaine de Randamie is the inaugural women’s featherweight champion, as she outlasted former bantamweight titleholder Holly Holm. De Randamie was dominant in the opening two rounds, countering everything that Holm threw. Holm flurried forward with combinations, but the Dutchwoman was ready to meet them with her right hand. Controversy surrounded the end of round two as de Randamie cracked Holm with a massive right hand after the bell. Holm began to clinch in the third frame, preventing de Randamie from mounting offense. Late in the round, Holm delivered a head kick that rocked de Randamie. After the bell sounded, de Randamie again punched Holm, but the referee did not take a point. The final two stanzas were spent in the clinch as Holm dictated the pace and positioning. A left from Holm landed in round five, but de Randamie recovered. The three judges cageside gave de Randamie three of the five rounds and crowed her champion.

Brazil’s Anderson Silva turned back the clock, taking home a hard-fought decision win over Derek Brunson. The pair started slow, gauging range. Silva landed with his counter right hook, but Brunson closed the distance and scored with uppercuts in the clinch. Brunson looked for a takedown, but Silva sprawled. In the second round, Silva was relaxed and loose, while Brunson looked tentative and nervous. Silva danced around and threw a variety of spinning attacks to keep Brunson on the outside. When the pair clinched, Brunson again unloaded with uppercuts from close quarters. The final round was more of the same, until Brunson scored with a takedown and worked from top control. When it was all said and done, it was Silva who had his name read as the victor.

Ronaldo “Jacare” Souza made short work of Tim Boetsch, submitting him by kimura in the first round. The Brazilian fired right hands early before shooting for a takedown. Boetsch stuffed it, but Jacare scored with knees from the clinch. Boetsch landed a heavy shot of his own, but Jacare scored a takedown. Once on the ground, Jacare took over, effortlessly passing to side control and then the mount. He locked onto a kimura and coerced the tap from Boetsch before the first round ended.

Former light heavyweight title challenger Glover Teixeira dominated Jared Cannonier to claim a lopsided decision. The Brazilian Teixeira exposed the lack of takedown defense from Cannonier, putting him on the canvas whenever he wanted. Cannonier worked back to his feet late in the first round and cracked Teixeira with a heavy shot that wobbled him. Teixeira continued his takedown assault, controlling Cannonier through the second and third rounds. Late in round three, Teixeira came close to finishing the fight, but the fight went the distance.

Lightweight Dustin Poirier and Jim Miller kicked off the main card with an all-out brawl. Poirier scored with straight punches from range, but Miller countered with shots to the body. The pair engaged in a wild firefight along the cage, as both fighters landed. Poirier caught a kick from Miller, but Miller was able to scramble and take his back. The middle frame was a mirror image of the first, as Poirier landed power shots, but Miller countered. In round three, Miller attacked the lead leg of Poirier with kick after kick, forcing him to stumble. Poirier wisely earned a takedown to nullify Miller’s onslaught. When the scores were tallied, two of the three judges awarded Poirier the victory.

In the final prelim, Belal Muhammad used his striking early and wrestling late to outwork Randy Brown. Muhammad was relentless with his leg kicks in the opening frame. He frequently dug into the lead leg of Brown, as Brown tried to attack from distance. Round two saw Muhammad begin to work with takedowns. He put Brown on his back and scored with strikes from the top. The final round was a mirror of the second as Muhammad again took Brown to the mat. He threatened with a rear-naked choke, but Brown was able to defend. It wasn’t enough for Brown, as the judges gave Muhammad the decision nod.

Brazil’s Wilson Reis used his superior wrestling attack to edge Japan’s Ulka Sasaki by decision. Sasaki used his reach advantage to score with strikes, but Reis changed levels and put him on his back. That would set the tone of the fight, as Reis frequently took the fight to the ground. In the middle stanza, Reis took Sasaki’s back and threatened with a neck crank. Sasaki survived and put together a strong third round. He took the back of Reis in a scramble, but could not find a finish. All three judges rewarded Reis with the win.

Islam Makhachev put on grappling clinic against veteran Nik Lentz to take home a clear-cut decision win. Makhachev used his sambo base to put Lentz on his back at will. Lentz countered early with guillotine attempts, but Makhachev easily escaped and controlled the fight from the top position. Makhachev passed to mount and then took Lentz’s back late in fight. He flurried hard with punches and then a rear-naked choke attempt, but Lentz was able to make it to the final bell. When the scores were read, there was no doubt that Makhachev had won.

Kicking off the televised portion of the prelims, Rick Glenn and Phillipe Nover engaged in a grueling, three-round affair. Nover showcased a clear speed advantage in the opening frame, clipping Glenn with a left head kick. Glenn took it well and scored with a counter left hand that opened a cut on the left eye of Nover. In round two, Glenn pressed forward, initiating the clinch and looking for a takedown. Nover exhibited great takedown defense to stay upright, but his offense slowed. It was more of the same in round three, as Glenn eked out the split decision victory.

Welterweight  Ryan LaFlare bested veteran Roan Carneiro with his superior striking to claim a unanimous decision win. LaFlare battered the body of the Brazilian early and scored with a takedown in the first round. In the middle frame, LaFlare dropped Carneiro with straight left hand, but was unable to finish. LaFlare’s striking carried him early in round three, but Carneiro went for broke late in the round, moving to mount. It was too little, too late, however as LaFlare earned the win.