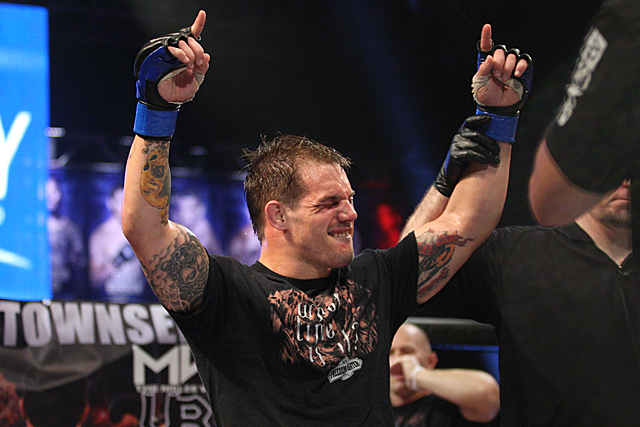 Anyone, anywhere, anytime. A small handful of mixed martial artists really do live by this motto. One of the most prominent in recent times has been Donald Cerrone. Win or lose, he’s always ready for a good scrap. In many ways, the up-and-coming Adam Townsend has followed the same path.

Tennessee’s Townsend is only 28 years old. His 8-0 amateur career took place over just 14 months, and his 16-4 pro career, which has spanned multiple weight classes, is less than five years old. In a short period of time, he has become a multi-division veteran. The best part is that he has finished a whopping 18 opponents in his combined pro and amateur careers. So, where exactly has he been all these years?

Over the course of his last four fights, Townsend has fought on two different continents and in three different U.S. states. He has competed in four different weight classes, too. The results include two knockouts and a dominant decision win over veteran Ryan Roberts. He did pick up one loss, but it was a closely contested split decision against Ernest Chavez when the two headlined Resurrection Fighting Alliance 33 about 14 months ago. The loss to Chavez closed out 2015 as Townsend’s fourth fight of the year, though he was scheduled for a total of seven fights in 2015, which is closer to his norm. However, the decline in activity didn’t end in 2015.

“2016 wasn’t the best year for me, to be honest,” Townsend told Combat Press. “I only got to fight two times. I won both of them, but still, I would have liked to [have] fought four more times that year. I had a rib injury and then I went and fought in China. Then, they dragged me around on my contract in China for a while, telling me a fight was going to happen, and it never did.”

Townsend’s last outing came in July, when he faced veteran Júnior Assunção at Art of War FC 18 in China. The fight didn’t make it past the first minute, as Townsend won by TKO due to an injury.

The Tennessee-based fighter sat on the sidelines for the remainder of the year and early into 2017. He previously had a three-fight stint with the RFA, logging a 2-1 mark with the organization. The RFA merged with Legacy Fighting Championship to form the Legacy Fighting Alliance in 2017, and the busy fighter saw an opportunity to get back on the horse.

“I was lucky enough to call the LFA, and told them I would like to get a fight,” Townsend explained. “They hooked me up and made me the main event against Marcus [Edwards], so it’s a good fight for the fans and a good match-up.”

On Friday night, Townsend will be back in the spotlight at LFA 5 in Broomfield, Colo. He faces the aforementioned Edwards, who is currently riding a two-fight winning streak. The fight will be contested at lightweight, which is Townsend’s natural home division.

Edwards is also a natural lightweight and a very exciting fighter in his own right. He is 12-4 as a pro. He has a pretty erratic style and has only been to decision twice.

“The only thing I’ve watched on him is that clip where he knocked that dude out in like 15 seconds or something like that,” Townsend said. “I’ve not watched any other film on him. He seems like he’s tough and he hits hard, and he’s got good wrestling and jiu-jitsu from what some people have told me. I used to watch film and drill it and drill it and drill it, but now I’m just going to go out there and do what I need to do. If you train too much and wait for somebody to do something repeatedly and he never does it, then you’re just sitting around waiting for it. I just need to go out there and make the fight happen the way I want it to. He’s going to have to defend what I’m doing.”

The altitude in Colorado brings an interesting challenge. It takes some time for an athlete to get acclimated before competing in just about any sport. This is especially important in the fight game. Townsend, who trains between D3 Elite and Team Oxendine in Tennessee, came out to the Centennial State last Thursday to finish up his training.

“I’m training with the Elevation Fight Team at MusclePharm,” Townsend said. “I went up there last year for three days, and I ended up breaking my ribs. I got in with them through Sven [Bean, Ring of Fire promoter and current Chief Operating Officer of the LFA], actually. I had a good time up there, other than the breaking-my-ribs part.”

Seven months has, by far, been the longest layoff of Townsend’s young career. It will come to an end in just over 24 hours, though. Edwards will be in for a serious clash with the Tennessee native, who is bringing arguably the most firepower Edwards has experienced yet. Townsend is likely bringing some pent-up aggression, too. His layoff caused him to have to find a job on the side. With two young sons and a wife who works full-time, he had to supplement his income while on the sidelines.

“I’m working for the Hampton Water Department,” Townsend said. “They’re cool about letting me go off and train and fight. I probably wouldn’t have taken a job if that wasn’t the situation. Other than that, I just chill with my family. I hang out with my kids all the time and do stuff with them. We get out of the house a lot and go to dirt-bike tracks and just hang out a lot.”

Even during his time off, Townsend has stayed active. Now, though, he’s ready to get back to business.

“I’m going to come out there [and] I’m going to get some pressure on Marcus,” said Townsend. “I’m going to make him back up and throw some big punches. I throw hard, he throws hard, and it’s going to be an exciting fight for the fans, for sure. He doesn’t like to be bullied, and I’m the bully, and I think that’s going to work in my favor.”

Townsend would like to thank all of his coaches and training partners, including Matt McKenna, Dustin Long, Dustin Walden, Casey Oxendine and Caleb Cupp. He would also like to thank his wife, Maggie, and his sons Peyton and Paxton, as well as all of his other family, friends, fans and sponsors. Follow Adam on Twitter: @AdamTownsendMMA
Advertisement