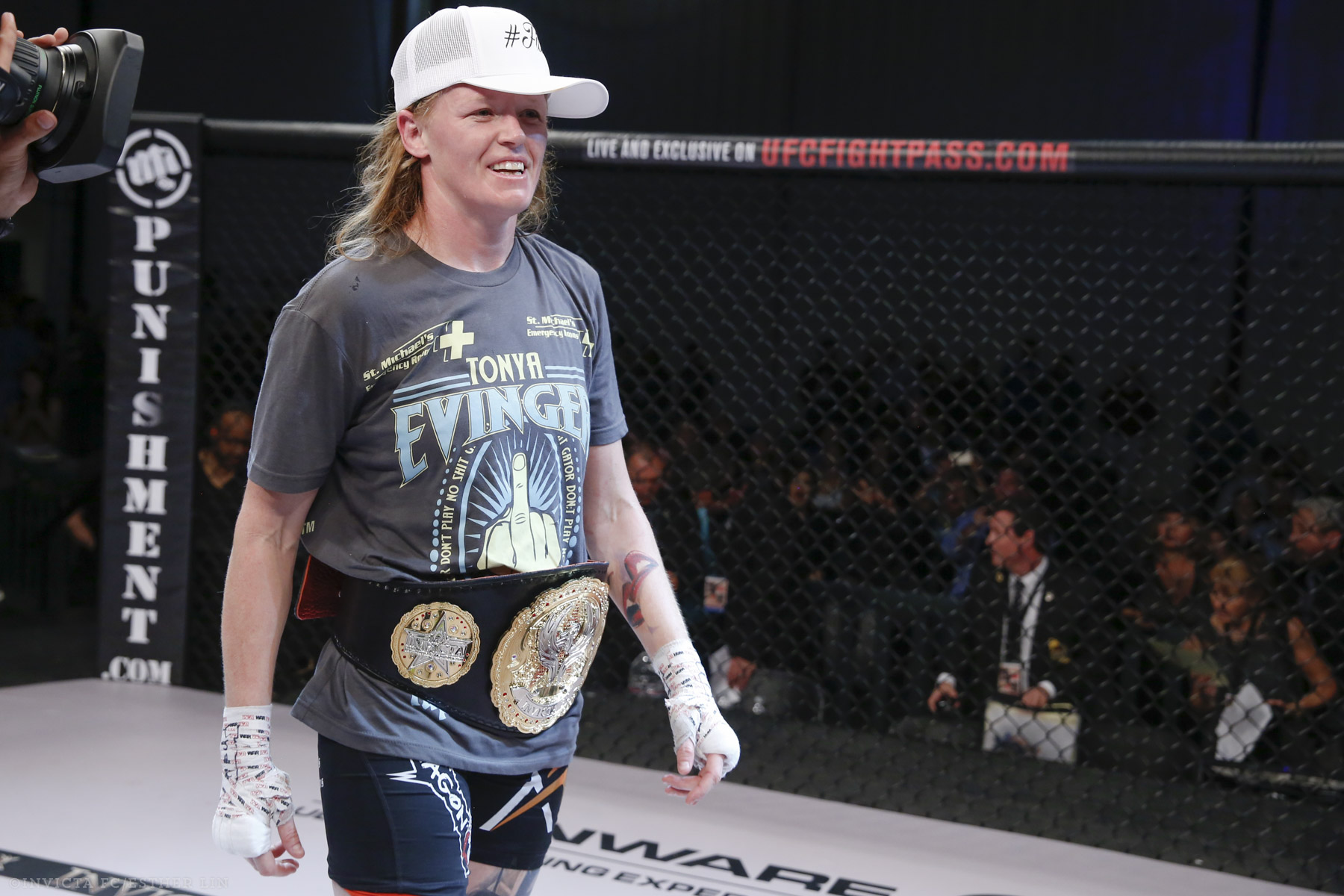 Invicta FC 17: What’s Next for the Winners

Invicta FC 17 is in the books. It was a night of entertaining fights that showcased the present and the future. Eight ladies walked out with their hands raised, and now Invicta matchmaker Julie Kedzie needs to find new opponents for the eight victors. Here are the match-ups that make the most sense for the Invicta FC 17 winners.

Evinger has cleaned out the division. Aldana, Kianzad and Colleen Schneider have fallen. Aldana and Kianzad were — and still are — regarded as prospects who would make the jump to the UFC after winning gold, but Evinger was there to spoil the party. She did the same to Schneider. There’s zero doubt that the UFC has wanted to add one of these bantamweights to the talent pool, but the company has not been able to do so after Evinger had her way with them.

So, who’s next? The logical solution would be a few contender elimination fights involving Dandois, Aldana, Kianzad and Pa’aluhi.

Hill showed massive improvements in her game. She is no longer just a Muay Thai striker, but a mixed martial artist. Her ground game was on display against Livia Renata Souza. When Souza was able to achieve a takedown, Hill was able to patiently fend off submission attempts and improve to full guard. It was poise we saw from a young fighter who is growing before our eyes.

Now, she’s also the new Invicta strawweight champion, and a champion needs a challenger. Enter Alexa Grasso. Again. It seems like Grasso has been near the front of the line for a while, but injuries have hit her at inopportune times and kept her from making it through a training camp. She is still the clear option to challenge Hill, but matchmakers Julie Kedzie and Kaitlin Young will have a backup plan in case Grasso gets injured again.

Enough pessimism, though. This fight will be fun to watch and could be a “Fight of the Year” candidate.

Aussie featherweight Anderson continued to impress with her stand-up and showed a killer instinct in finishing Amanda Bell.

After a loss to Cindy Dandois in Anderson’s Invicta FC debut, we’ve seen a growth in her game. Much has already been said about the work James Krause and Glory MMA have done to help refine Anderson’s skill set, but it can’t be said enough. Look at the fight against the aforementioned Dandois and then look at her two next two outings. They are vastly different.

A strong argument could be made for Anderson to meet Cristiane “Cyborg” Justino, but that’s too much, too soon. Anderson is still green. She’s been in the sport for only a few years. Therefore, Tweet would be a better option. Tweet has bounced back from her last Invicta appearance — a defeat at the hands of Cyborg — and handled Latoya Walker’s best punches, displaying toughness before unleashing a spinning back fist that ended the fight and earned her a TKO victory.

Tweet is a veteran and a game opponent. Put these two featherweights in the cage, and Invicta President Shannon Knapp might as well get ready to award the winner a bonus.

Medeiros played the role of spoiler and underdog against Aline Sério. Not many predicted Medeiros to win this fight against what was supposed to be a superior fighter, but Medeiros had her way, earning the finish and a spot on an upcoming Invicta card sooner rather than later.

Medeiros hinted at a move to atomweight. The fight that has “scrap” written all over it would be with former 105-pound champion Herica Tiburcio. Tiburcio has lost her last two fights, including her most recent to title contender Jinh Yu Frey at Invicta FC 16. She is itching to get back in the cage.

Tiburcio would love to make another run at the atomweight title, but Medeiros would have the opportunity to play spoiler once again. If Medeiros does so, she shifts from the role of underdog to the status of a title contender.

“Knuckles” had been clamoring for a fight forever, it seems. She finally got one, and she let the brass know what they had been missing. To Invicta’s defense, Stanley did have a fight lined up once before, but her opponent got injured the week of fight night, forcing a cancellation.

Stanley was dominant on the feet against Shannon Sinn. She showed a little bit of bravado in her game — maybe a little homage to the Diaz brothers? Her stand-up is not to be trifled with, but we don’t know much about her overall game. How can she handle fighting off her back? Can she defend submissions? And if taken into deep waters, how can she respond?

Enter another competitor from the Invicta FC 17 card: Ostovich. Ostovich was impressive in her own right, bouncing back from a submission loss to Andrea Lee and taking “Fight of the Night” honors in her win against Ariel Beck. Ostovich would bring the fight to Stanley. Even though she is young in her career, Ostovich displays a savviness of a veteran with many fights. Ostovich is no slouch on the ground, either, and things could get interesting if she is able to take Stanley to the mat.

It wasn’t without controversy, but Howarth earned her first Invicta victory, and third pro win, when she defeated Alexa Conners via split decision. The win improved the young Brit’s record to 3-1.

Orr had to pull out of what would have been her first pro fight at Invicta FC 16 with a knee injury. It was also the first time Orr had to withdraw from a bout in her fight career, a career that spanned over 10 amateur fights.

Orr has lost only once. She has been a prospect for a few years and one the fans have been wanting to see fight as a professional. Orr would be getting thrown into deep waters against a fighter with four pro fights under her belt, but Orr wouldn’t want it any other way.