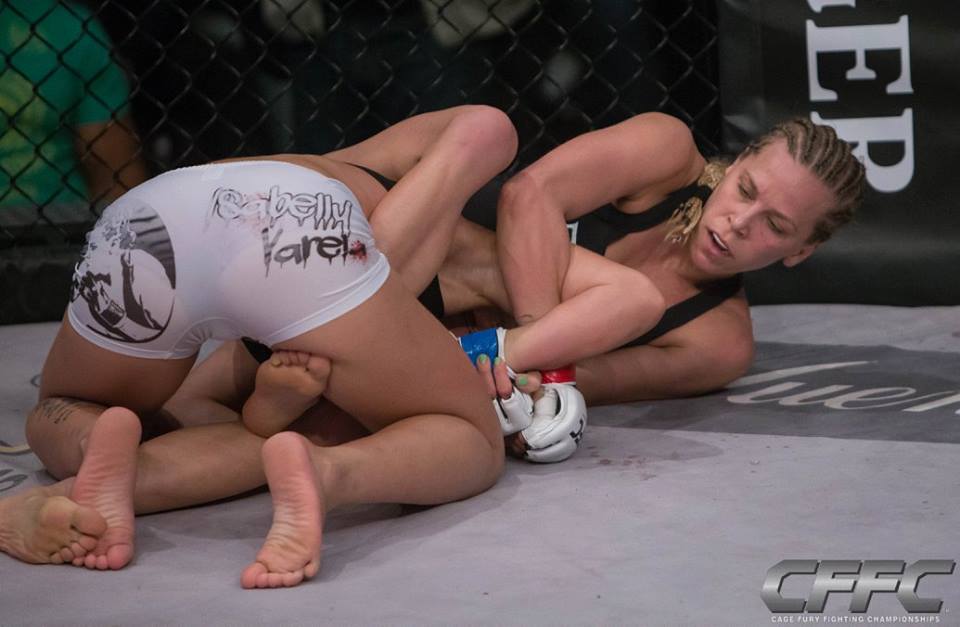 The UFC is headed to Australia this weekend. While all eyes will be on the big show, it’s not the only noteworthy event taking place Down Under. The Australian Fighting Championship’s 15th effort features a strong pair of title fights atop the bill. The middleweight title showdown between reigning promotional light heavyweight champ Jamie Abdallah and Robert Wilkinson is the headliner, but the more established set of prospects clash in the co-main event. That’s where Alex Volkanovski will defend his featherweight title against undefeated challenger Jamie Mullarkey.

Volkanovski is one of the region’s best featherweights. This may have something to do with his trophy case, which contains title belts from Roshambo MMA, Pacific X-treme Combat and Australian Fighting Championship. “The Hulk” made his pro debut in 2012 and claimed three wins before making his AFC debut in a losing effort against Corey Nelson. It was a small setback, but the Tiger Muay Thai MMA product responded by reeling off eight straight wins and capturing the three aforementioned titles. He has competed at a variety of weights ranging from featherweight up to welterweight. Volkanovski claimed and defended Roshambo’s lightweight title before making a more concentrated effort within the featherweight division. He claimed the AFC strap with a first-round finish of James Bishop via strikes and then turned around and snagged the PXC championship with a fourth-round submission of Yusuke Yachi. Volkanovski has a background as an amateur wrestler and has competed in Rugby League. He has six wins via strikes and three victories by way of submission.

Volkanovski isn’t the only decorated fighter in this contest. Mullarkey is an under-21 Pankration world champion who also claimed the BRACE tournament season-one championship in the featherweight division and went on to snag the BRACE featherweight belt in his most recent outing, a second-round submission win over Greg Criticos in November. He has four wins via strikes and three official wins (plus one exhibition victory) by way of submission. His only previous AFC appearance came in the aforementioned exhibition bout. The 21-year-old is based out of Magnus Martial Arts Erina and also works out at VT1, but he has also spent time working with John Kavanagh of SBG Ireland fame.

This should be an entertaining fight between two top Aussie featherweights, both of whom possess high finishing rates. Volkanovski leans more toward wrestling, but he throws bombs on the feet, especially when separating from the clinch. Meanwhile, Mullarkey tends to rely heavily on his striking arsenal to soften up his opponent before going for the finish on either the feet or the canvas.

Mullarkey easily stuffed the takedowns of Criticos, but Volkanovski brings a much more powerful takedown game. Furthermore, “The Hulk” tends to target the chin while going in or separating from the clinch. He’s destroyed previous opponents with those big shots. Mullarkey has the more technical stand-up game, but Volkanovski’s wrestling and power striking will make the difference in this affair. The champ will defend his belt with a TKO victory over Mullarkey.

The 33rd offering from Aspera Fighting Championship may have a couple of high-profile names in Ivan “Batman” Jorge and Janaisa Morandin, but there’s also an interesting pairing in the lineup that could produce a future high-profile name. The bout takes place in the featherweight division and features undefeated Alex da Silva, who takes on Gelson Magalhães.

Da Silva is just 20 years old, but he has already amassed an impressive unblemished mark through 15 pro fights. “Leko” is still early in his development, however, and many of his opponents have lacked experience and winning records. The Astra Fight Team product has done all of his damage in a short time after debuting in January 2014. He was 8-0 by the end of his first calendar year as a pro, and he kept up the pace with seven fights in 2015. This, however, will be his first fight in 2016. Da Silva, an Aspera mainstay who made his pro debut with the organization and even fought there as an amateur, has not seen the scorecards since turning pro. He has finished nine opponents via strikes and six by way of submission.

Magalhães, 27, made his pro debut in 2012 and lost two of his first three outings before finding his groove and going on an eight-fight winning streak. The Nova União Joinville fighter was very active through 2014, but he did not compete at all in 2015 and this will mark his first appearance of 2016. Magalhães, like da Silva, has a high finishing rate and a balance of striking and submission finishes.

It’s always difficult to gauge young prospects. Even UFC President Dana White has watched in disappointment as the likes of Sage Northcutt and Paige VanZant have fallen victim to losses against experienced opponents who might not seem like overwhelming threats. This could be the situation for da Silva, who appears to be a rising prospect, but also a fighter who has not faced many stiff tests in his career. Magalhães is a Nova União fighter, so he won’t be a pushover. Technically, da Silva is the veteran in this battle, but Magalhães is several years older than da Silva and could bring a more mature approach to the fight.

Despite the decent odds that Magalhães can play spoiler, the nod here still goes to da Silva. Both men prefer to get the finish, but da Silva has been perfect in his quest. Magalhães, meanwhile, has twice fallen via strikes. Look for da Silva to attack and put away Magalhães via TKO.

The flyweight division is one of the more shallow weight classes in women’s MMA. Most ladies opt to go up or down in weight in an effort to make it to the UFC. Meanwhile, any remaining flyweights tend to gravitate to Invicta. Right now, Cage Fury Fighting Championships has one of the few 125-pounders not either under UFC or Invicta contract: Katlyn Chookagian. Chookagian holds the promotion’s women’s flyweight title, and she’ll put the belt on the line at CFFC 57, where she meets Stephanie Bragayrac.

Chookagian has had a well-traveled career, both as an amateur and a professional. As an amateur, she racked up seven wins while making stops under the XCC, NAAFS and Cage Fury banners. As a pro, she debuted with Cagge Fury, but made her sophomore appearance with the World Series of Fighting. This fight will be her attempt to bring her spotless pro record to the same mark as her amateur record. Chookagian won the Cage Fury flyweight strap in her most recent appearance, an impressive win in January over fellow up-and-comer Isabelly Varela. Chookagian took a five-round decision in the affair, giving her four decision wins to go along with one submission and one knockout as a pro. The 27-year-old is based out of Team Renzo Gracie and Allstar Brazilian Jiu-Jitsu. She notched four submission victories and five total stoppages as an amateur.

The 27-year-old Bragayrac is a veteran who tends to struggle when she steps up in competition. She debuted in 2010, but didn’t make her second outing until 2012. Bragayrac suffered her first loss to Pamela Boveda Aguirre, whose record now sits at 4-1, but she turned around to avenge the loss in their rematch. Her other two losses came against top Brazilian prospect Mariana Morais, who has since gone on to compete for Invicta, and Jennifer Maia, the recently crowned Invicta interim flyweight champion. Bragayrac has finished two opponents by way of strikes and four foes via submission. She was finished in all three of her losses.

Chookagian appears to be poised to follow in the footsteps of Morais and Maia. The Cage Fury champ is certainly a step up for Bragayrac, who hasn’t proven she can handle the tougher competition. Chookagian should at the very least walk away with the decision victory. The real question here might be whether the champ can score a finish.