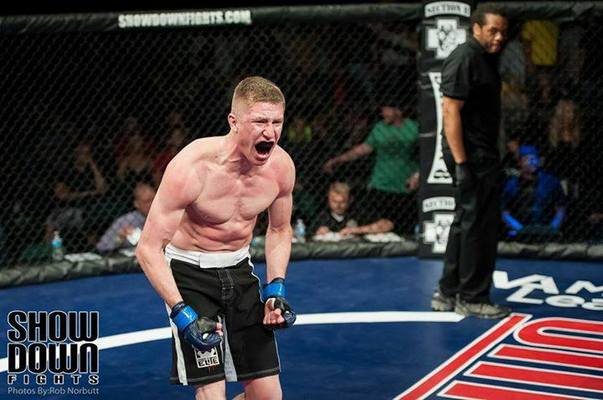 RFA 35’s David Putvin: A Man of Many Faces

An Indian prince one night. Hannibal Lecter another. When it comes to the walkout before a fight, David Putvin puts on many faces. MMA events are in many ways a spectacle, and Putvin does his best to add his own flavor to the festivities.

“I actually started my whole walkout gig really to keep myself busy and add that extra entertainment factor to the crowd,” Putvin told Combat Press. “It’s almost become a pre-fight meditation, I guess you could say, getting into whatever character I’ll be walking out as. It helps me keep my mind off things and then, when I step into that cage, then I can turn that on button.”

Once inside the cage, playtime is over. Everything turns to business. For Putvin, that business usually entails choking out his opponent to earn the submission victory. All seven of his wins have come by some form of choke — his speciality is the rear-naked variety. However, Putvin does not discriminate with his chokes. Just ask his opponent at Showdown Fights 14, Brian Thomas, who found himself on the receiving end of a flying triangle choke.

In Putvin’s last fight, the opportunity never presented itself. Instead — and for the first time in his young career — Putvin walked away with a loss.

“It wasn’t really too difficult for me to take,” said Putvin. “I just took it as a learning experience, and that’s a big part of this sport, how you take your losses. A lot of fighters take losses and get desperate in other fights, or even get to the point where they don’t want to fight anymore. So, I wanted to make sure I kept my same passion, and I still love what I do and didn’t take it to heart too much.”

At 23 years old, Putvin displays a mental maturity well beyond his years. He understands losses are a part of the sport. He also is aware that fighting is not something he can or will be doing his entire life. After his lone defeat, Putvin jumped at an opportunity that presented itself. He started working at E-Trade as a financial consultant.

“The timing of it was actually really good,” Putvin said. “That’s something to where, when I’m done fighting, I can definitely go back to as far as a fallback career. A lot of fighters will finish fighting and go, ‘What am I good at? I don’t what I can do now.’ They don’t know what their skill set is.

“The initial starting point was a guy at my gym, one of my mentors, David Allred, who had been working there. And I saw his success, so I asked him what I would need to do to put myself in a position where I could be like him, essentially. He got me an interview and throughout the first year mentored me in the sales aspect of it.”

Putvin got word that the Resurrection Fighting Alliance would be coming to Utah. He left his position at E-Trade to get back into training full-time. He wanted to get back to fighting and he wanted on that card. Shortly after, RFA 35 was announced with promotion-vs.-promotion bragging rights at stake. Putvin, representing Showdown Fights, was announced for the card. His opponent, Thiago Moisés, would be representing the RFA.

“For all my fights in the past, I’ve always had in the back of mind, hesitations to whether or not for whether I was really ready for the fight,” said Putvin. “People would always tell me I go into fights so confident, and it hasn’t been until just recently that I let people know that I had a lot of hesitations — not because I wasn’t training hard, but because I wasn’t doing it full-time like I am now. Now that I’m doing this, I’m a completely different fighter. Just in the last month I’ve been going two and three times a day, a week, every day.”

Rest assured, Putvin will be representing another character before his fight. The loss hasn’t deterred him from going out and entertaining the crowd. If you take him at his word, this one will be can’t-miss.

“I’ve got a plan and it’s probably going to be — what’s the word I can use for it? — I’ll just say it’s going to be my spookiest walkout yet. I’m really excited for it. I’ve had so far my Indian prince and Hannibal Lecter walkouts that have been my two favorites. I feel like this one isn’t going to top both.”