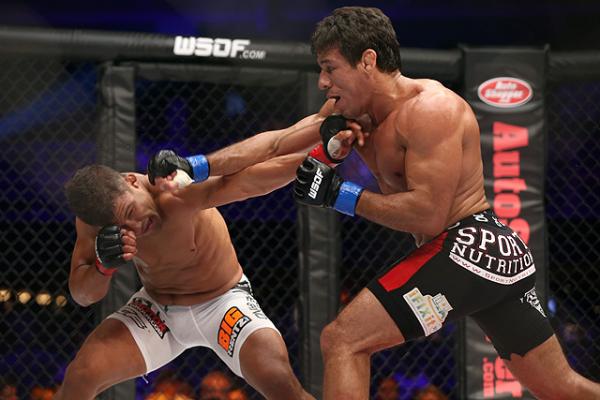 The World Series of Fighting was back in action on Saturday, Jan. 23, with its 27th event from The Theater at FedExForum in Memphis, Tenn.

In the night’s main event, Strikeforce, UFC and ONE Championship veteran Caros Fodor made his promotional debut. He clashed with Brazilian Luiz Firmino, who entered the cage riding a five-fight winning streak. Fodor opened his Strikeforce tenure with five straight wins, but after falling to Pat Healy, he fell to Sam Stout in his lone UFC appearance. He rebounded under the ONE banner, winning three of his four appearance. Firmino, meanwhile, had scored back-to-back wins inside the WSOF cage over UFC veterans Jacob Volkmann and Tyson Griffin. He also holds a win over two-time WSOF title challenger Luis Palomino.

The co-main event featured light heavyweights Teddy Holder and Shamil Gamzatov. Holder looked to bounce back from a loss to current WSOF light heavyweight and middleweight champion David Branch. The pair met in the promotion’s 205-pound tournament final after Holder shockingly stopped UFC veteran Thiago Silva in the semifinals. The Russian Gamzatov was making his promotional debut. The 25-year-old carried an unblemished record of 9-0, with all of his wins coming before the final bell.

The action kicked off with three preliminary-card bouts airing live on Combat Press at 8 p.m. ET, before transitioning to the NBC Sports Network at 10 p.m. ET for the four-fight main card.

Space isn’t just the final frontier, it was the story of the main event. When Caros Fodor had it, he had some good moments. When he didn’t, which was most of the fight, he was completely neutralized. Credit Luiz Firmino, the victor by unanimous decision in this one. He is no stranger to a dog fight but he knew coming in that even if he could have beaten Fodor in that fight, he was taking more risk than necessary. The real genius of game plan was how much time was spent against the cage. Fodor excels on the ground and with space, Firmino gave him limited opportunities in either area.

From Russia throwing gloves. Shamil Gamzatov made his debut by knocking Teddy Holder’s block off for a first-round knockout victory. It is said in a fight to protect yourself at all times but it must be mentioned that there was a bit of awkwardness second before the knockout. Holder felt his eye was poked and he and Gamzatov were unsure if they were fighting or stopping. When the fight resumed it was an overhand right that dotted the aforementioned eye and was the beginning of the end for Holder, who was ultimately finished on the ground with strikes.

Bryce Mitchell made short work of Jorge Medina in their match-up. The fight started with Medina executing a beautiful judo throw in a scramble. Next thing he knew, he wasn’t breathing. It was that quick.

The main card began with some young welterweights on the rise, Jaleel Willis and Chauncey Foxworth. Going into the fight Willis held the edge on the ground while Foxworth was better on the feet. That’s exactly how it went as Willis spent the majority of the fight in top position. He did get cut and there was a lot of blood but it didn’t slow down the wrestling and he steamrolled Foxworth to a unanimous decision win.

The final fight of the prelims was a fight that had everything you want if you are a fan of MMA. Wade Johnson dominated the stand-up and Justin Hartley dominated the ground game. In the end, two of the three judges liked more of what they saw from Johnson on his feet and awarded him the split decision.

The second fight was also quick as Jason Williams crushed Zach Underwood. A monster right hand to the rib cage looked to be what took the thunder out of the young lightweight.

The night began with Alvin Williams vs. Wes Sharp, two lightweights with varying backgrounds. The 25-year-old Williams, a certified head-hunter came out and made short work of his opponent. It lasted just 30 seconds and started the show off with a bang.