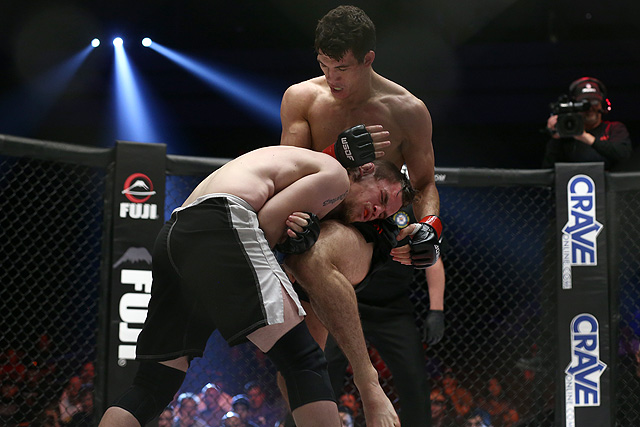 This past weekend, Phoenix played home to World Series of Fighting, with the 19th edition taking place at the Comerica Theatre. WSOF 19 was headlined by a spectacular fight between champion Justin Gaethje and challenger Luis Palomino, in what some are calling an early contender for “Fight of the Year” honors. However, the headlining lightweight title tilt wasn’t the only significant moment of the night.

In particular, there was one fight on the undercard portion of the show that really caught my eye, and not for the reasons some would expect.

Eric Regan, a 40-fight veteran with a 15-24 record going into the fight, took on Matthew Frincu, a 5-1 prospect out of Australia. From the first bell of the fight, Frincu was able to establish his range. From that point forward, Regan had no answer for what Frincu was delivering.

Regan was battered for an extensive period of time in the first stanza. There were several times when I was hoping the referee would step in and do his job of protecting the fighter. It was no fault of Ryan Brueggeman, who was assigned the fight by the Arizona Boxing and MMA Commission. Regan was trying his hardest to stay in the battle.

The grateful end of the fight came at the 14-second mark of round two. The finishing move was a left high kick that Frincu landed flush to knock out Regan. On Tuesday, March 31, the Arizona Boxing and MMA Commission issued its list of medical suspensions. None of them came by surprise, except for one: the ABMC issued an indefinite suspension of Regan and also recommended that he stop competition altogether.

This was the first time that a commission has issued a recommendation of retirement to a mixed martial arts fighter.

Yes, Regan has only had four knockout losses in his lengthy career of 40 fights. He has also lost eight of his last nine bouts, with most of the losses coming under the watch of the ABMC. If there is anyone (or any one commission) that knows how tough Regan is, it would be the ABMC. The commission is also a business, though, and it understands that it is not good business to have somebody risk their life under the commission’s watch.

More commissions should take a stance like the one the ABMC has taken. The sport of mixed martial arts is one filled with overly hyped, testosterone-filled competitors who feel that they can overcome anything, including themselves.

Mixed martial arts is a very young sport and we do not yet fully understand the damage these competitors are taking, nor can we predict the long-term effects of that damage. Yes, we can look at the over 100 years of history that boxing has given us, but that is just one glimpse of what can happen. Chronic traumatic encephalopathy, or CTE for short, is rampant in football, from Pop Warner to the pros, with major testing and research only just beginning.

It is the commission’s job to have the experts tell them what constitutes excessive damage and what type of damage a fighter can absorb and still be able to continue on.

Back to Regan and his career.

Can Regan still fight and try to bring his career back to its winning ways? Sure. Should he continue a career that from the beginning didn’t start off well? This one writer would say no. I watch, enjoy and write about mixed martial arts for its skill. I do not do those things just to see two men pummel each other to an unfortunate end.

Commissions look at all kinds of different variables for issuing licenses to fighters. Medical and fight history need to be given a closer look. Looking back on history, there are a few names that should not have had a chance to return to the cage. Regan is now part of that list.

Let’s give a round of applause for the Arizona Boxing and MMA commission for seeing the writing on the wall, even though the fighter might not be able to see it yet.