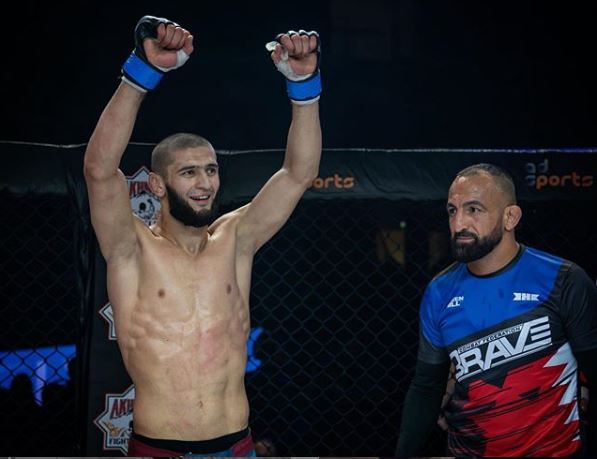 The UFC returns to Abi Dhabi on Saturday, Oct. 30, featuring one of the most stacked cards of the year. The event features two title fights and a plethora of enticing matchups. With UFC 267 only days away, let’s preview some of the most attractive betting strategies heading into the weekend.

This weekend’s card boasts several heavy favorites, so it is difficult constructing a parlay lineup with just a few names. Thus, the strategy here will be to pile on a few of those favorites and throw in a favorable underdog in an effort to balance out the lineup with some upside. Makhachev and Chimaev are the biggest favorites on the card by a mile, and for good reason. Makhachev takes on the always entertaining Dan Hooker in a bout that should result in Makhachev continuously taking the taller fighter down. He will likely lay on a heavy ground-and-pound attack and, eventually, a submission victory. He remains one of the safest, yet least profitable, bets of the card. In addition, Chimaev takes on a much smaller opponent in Li Jingliang, who is an established knockout artist coming off a fantastic KO victory over Santiago Ponzinibbio. However, Chimaev will likely adjust his game plan and exploit the weaker ground game of Jingliang to grind out a unanimous decision.

Next, we throw in two more favorites in Andre Petroski and Albert Duraev. Petroski is coming off an awesome UFC debut victory over Micheal Gill in August and boasts some serious grappling skills as well as power. He takes on Yaozong Hu of China, who is 0-2 in his UFC campaign thus far. Petroski will use his wrestling and power to control Hu and pull of a submission victory. Duraev makes his UFC debut against Roman Kopylov after compiling an impressive 14-3 record. He is an establish finisher, capable of ending fights both on the feet or ground. He certainly has the potential to make a splash in the UFC welterweight division. Kopylov had established a perfect 8-0 record, prior to joining the UFC, but he suffered a submission loss to Karl Roberson in Nov. 2019. He has not competed since. Momentum is on the side of Duraev, and he will extend his winning streak to ten come Saturday.

Finally, we cap off this parlay with a slight underdog in Ricardo Ramos. The Brazil native takes on Zubaira Tukhugov, whose most relevant moment in mixed martial arts is taking part in the infamous brawl between the corners of Khabib Nurmagomedov and Conor McGregor at UFC 229. The latter last competed in Sept. 2020, where he missed weight and suffered a split decision loss to Hakeem Dawodu. Ramos has compiled a 6-2 record inside the UFC and will be able to negate Tukhugov’s ground attack using his own grappling pedigree to pull off the upset via unanimous decision.

I have less confidence in this one and for good reason. The only stable pick of this parlay is Lerone Murphy, who has compiled a 10-1 record and is currently riding a two-fight winning streak in the UFC. He takes on Makwan Amirkhani whose better days are behind him, despite a successful UFC career since 2015. Murphy will use his superior cardio to out-hustle Amirkhani and pull off a safe, yet convincing, unanimous decision. The real meat of this parlay comes with the next two fights which are high risk, high reward.

Marcin Tybura is on one of the most impressive heavyweight winning streaks of recent memory, which includes victories over Ben Rothwell, Greg Hardy and Walt Harris. He takes on the toughest test of his career in Alexander Volkov, who will hold both a reach and height advantage. However, Tybura has shown some real improvement in his mixed martial arts game since 2020 and certainly has the tools to get close to Volkov and land some serious punishment. The anchor of this parlay is Cory Sandhagen upsetting Petr Yan, which is certainly possible. In full transparency, I expect Yan to defeat Sandhagen via unanimous decision, but there is a reality where Sandhagen’s awkward and unorthodox style presents trouble for the former champion. Thus, it is completely understandable to sprinkle some action on Sandhagen, in case he does pull it off.

As of Oct. 26, this fight presents the closest odds on the card and rightfully so. Not only is this my pick for “Fight of the Night,” but it is also one of the most difficult matchups to predict, due to the immense skill that both women possess. Both Ribas and Jandiroba are prolific grapplers, capable of submitting most, if not all, of the current strawweights. This bout will truly be a pick-’em fight with a ton of action and momentum changes until the final bell rings. There is huge potential for a fight like this to head to the judges and end up in a split decision situation. For those reasons, I am out.

I am a fan of Teixeira and his latest resurgence, but it is simply too difficult to imagine a reality where the champion falls victim to the challenger. Błachowicz is a fighting machine, who is simply peaking at the perfect time. He will hold a striking and power advantage over Teixeira that should negate the challenger’s ability to get Błachowicz on his back where he can do his best work. The champion is leaps-and-bounds better than when he was last dominated on his back in his first fight with Corey Anderson. He will, yet again, show why he became the UFC light heavyweight champion when he defeats Teixeira and reaffirms his championship reign. Odds-wise, this isn’t the best bang for your buck, but this card simply lacks a lot of notable value due to the many heavy favorites.

Islam Makhachev to win by submission (+240)

No surprise here, as Makhachev is a relentless takedown machine who is consistently looking to strangle his opponents into submission. He will look to do so against the taller Hooker and has a fantastic chance of doing so. If you are into prop bets, this remains, by far, one of the most attractive bets of the card.