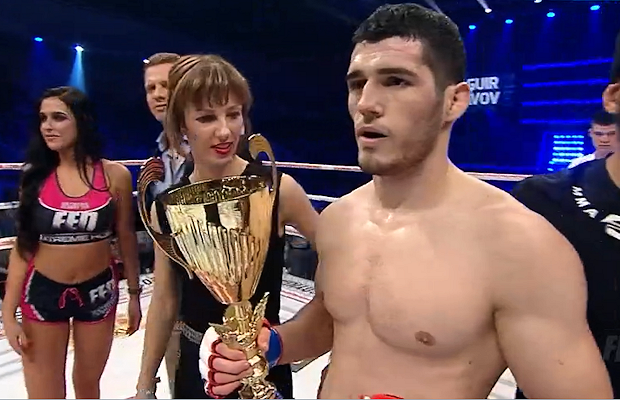 Out of Obscurity: FEN 23, Way of the Dragon Championships 3 and BFL 59

January continues to be a slow month for major MMA promotions, both on a global and a regional level. This clears the way for the spotlight to be thrown on the likes of the Fight Exclusive Night promotion in Poland. Usually overshadowed by fellow Polish promotion KSW, FEN draws our attention with its 23rd event. There may not be a lot of depth to the lineup, but the lightweight title tilt atop the card is arguably the biggest MMA bout of the weekend. Mateusz Rębecki, who has only lost once in nine professional outings, buts his strap on the line against Daguir Imavov, a worthy challenger.

Rębecki has been a FEN regular for several years now after initially competing on smaller shows. He debuted in 2014 and won his first three fights, including a sophomore outing against veteran Semen Tyrlya, by first-round heel hook. “Chińczyk” took a loss in his fourth fight when he was knocked out by fellow undefeated up-and-comer Paweł Kiełek. He entered the FEN organization for his next fight, a 2015 victory over Jacek Kreft via armbar. After a lengthy layoff, the 26-year-old returned in 2017 and marched through three foes en route to the league’s lightweight championship, which he won with a knockout of 24-fight veteran Marian Ziółkowski. The Berserker’s Team fighter defended his title seven months later with a knockout of Łukasz Kopera.

The challenger Imavov continues Rębecki’s trend of fighting solid competition. The Dagestani-born, French-based prospect got his start in 2013. He won two fights in a single month against sub-.500 competition. Five months later, he returned to action and suffered his first loss via submission against Soren Bak, then an undefeated upstart and now a Cage Warriors champion. “Specnaz” recovered to the tune of a 7-0-1 run in which he fought to a draw against future BAMMA fighter Damien Lapilus and defeated European standout Juha-Pekka Vainikainen. Imavov seemed BAMMA-bound himself, but instead fought just once — a loss — through 2015-16 while having five fights scrapped for various reasons. He made a solid comeback in 2017 and scored three victories, including one knockout. His 2018 hit the same setbacks that plagued him just two years earlier, as the 27-year-old had two canceled fights. This contest with Rębecki will mark his first fight in over a year.

Imavov performs well when in action. The problem is whether he actually gets to fight. He’s had at least eight nixed bouts since the beginning of 2015, compared to just four fights that actually came to fruition. Perhaps the better odds on this fight involve whether Imavov hears the opening bell. If he does compete, we’re looking at a fighter who has adequate power and a large tendency to go the distance. The loss to Bak isn’t an embarrassment, given Bak’s recent win over a stud like Paddy Pimblett, and even the more recent defeat against Ott Tonissaar constitutes a test against a fellow up-and-comer. The Sausset FightTeam product was building momentum with his fights against Lapilus and Vainikainen, but his one prior stretch of inactivity did seem to hamper Imavov slightly.

Rębecki gives up three inches in height to Imavov in this contest, but the Polish fighter could look even shorter given their different builds. Rębecki is a compact wrestler, whereas Imavov tends to fight long. The champ is likely to shoot for takedowns and attack Imavov’s legs if he gets a chance, but his wrestling tendencies also leave him at a big disadvantage. Rębecki has a habit of leaving his neck out for the taking and squandering top position in scrambles or during takedown attempts. The one saving grace for him in this fight is Imavov’s lack of submission finishes. The Dagestani fighter might stuff Rębecki’s takedowns or get the better of the Polish fighter on the mat, but it’s most likely that he’ll have to build up points with the judges rather than scoring a finish.

Mixed martial arts is on the rise in several parts of Asia, including Taiwan. The Way of the Dragon Championships, run by the Chinese Taipei MMA Association, is one of the leading organizations in the area. The company has handled a mix of amateur and pro events, but its numbering scheme can be confusing. This is effectively the third major show for Way of the Dragon, but the league has eight events on record, including some amateur shows. Despite its smaller nature, the promotion managed to attract the likes of Will Chope for its second event and Glenn Sparv for both of its prior major shows. This time around, Shunichi Shimizu is the biggest star in the lineup, but the best match-up is probably the pairing of light heavyweights Da Un Jung and Abutalib Khalilov.

Jung hails from South Korea and trains with Korean Top Team. The 30-year-old has two losses on his record, but those defeats came in his second and third pro fights after a debut win in 2015. Through his last eight fights, Jung is perfect. He has fought for Japan’s Heat organization, where he reigns as the light heavyweight champion, as well as South Korea’s Top FC and China’s Art of War FC. This has provided him with a rather underwhelming lineup of opponents. He does hold a ground-and-pound stoppage victory over Shunsuke Inoue, but the remainder of his current streak came against opponents with a combined 14-24 mark when they met Jung. This set of foes included a rookie fighter in Heat known only as “Hulk” and two other winless fighters.

The 27-year-old Khalilov isn’t much better in this regard. His most notable victory in four pro fights is arguably his first-round armbar submission of Evgeny Ivinskiy, who came into the fighter sporting a 3-4 record. He debuted in 2013 with a first-round submission of a veteran fighter in Sergey Akinin, but Akinin already held an embarrassing 4-20-1 mark. Overall, Khalilov’s opponents were a combined 8-27-1 before fighting him. Also working against “Butta” is his lack of activity — he hasn’t seen action since early 2015.

Both of these men have a lot to prove. Jung is a champion, but Heat doesn’t quite enjoy the same reputation as Pancrase or Shooto for churning out top fighters. Khalilov is undefeated, but he’s been on the sidelines for three years and padded his record with a bunch of tomato cans.

Jung is the bigger and likely better fighter. That’s not saying much in this match-up, but the South Korean has at least has more experience and one win against a legitimate opponent. Khalilov’s long absence and lack of adversity in previous fights will work against him here. These guys are finishers, so don’t expect this fight to go the distance. It should be Jung who picks up the win via some form of knockout.

Battlefield Fight League’s 59th event mixes professional MMA with amateur MMA, kickboxing and grappling. It’s primarily a showcase for upstart Canadian talent at all levels of the game. The headliner, a bantamweight title clash, provides us with two of the most promising fighters of this bunch. Cole Smith, the current titleholder, makes his second defense of the belt when he takes on Tyler Wilson.

Smith didn’t have the easiest of amateur runs. Instead, the now-perfect pro went just 4-3 through seven ammy outings. Despite losing three of his last four amateur bouts, “The Cole Train” debuted as a pro in early 2016 and needed just 35 seconds to knock out winless opponent Komon Ninin. His success continued when he upgraded to opposition with winning records. First, he scored a rear-naked choke submission of Jamie Siraj under the BFL banner. Then, he added a first-round knockout victory with the Thailand FC organization. He’s since recorded two more wins with the BFL, including a first-round submission of Tyler Dolby. Smith, who’s known for his Muay Thai skills, has a sneaky grappling game. While he trains out of The Sound Martial Arts in Canada, he has had the opportunity to train with both former ONE Championship titlist Bibiano Fernandes and Team Quest in the past.

Wilson’s amateur career started the same way Smith’s ended — with a 1-3 stretch. However, Wilson recovered and posted seven consecutive wins to close out his ammy tenure. He debuted as a pro in 2017 and won his first two fights by rear-naked choke. His third pro outing ended in disappointment when Wilson suffered a submission defeat, but he rebounded with another rear-naked choke finish in his first bout of 2018. The Hayabusa Academy fighter’s two most recent efforts ended in knockout wins.

Wilson is a strong fighter from top position, and that’s where he’ll want to be against Smith. The champ may have finished Dolby from the bottom, but he’s much more likely to threaten Wilson if the pair stands and trades. Wilson can sometimes leave his chin wide open — his striking defense on the feet was horrendous in his amateur fight with Sam Debalke just two fights before Wilson went pro — and Smith will be more than willing to accept a wide-open invite to drop his opponent.

If Smith gets dragged to the ground, he’s in far more danger against a man whose primary finishing move is one that caught Smith in an amateur outing. Wilson loves the rear-naked choke, and Smith lost a fight to Ali Motamed via the submission. However, Smith was probably dazed from getting slammed while attempting an armbar on Motamed just prior to the finish.

Smith has come a long way since the Motamed loss, and even since the rough end to his ammy days. He’s likely to tag Wilson on the feet repeatedly, which won’t help the challenger’s odds of victory. As long as Smith doesn’t end up fighting off his back, he should manage to find the victory. Given the holes in Wilson’s stand-up game, Smith might even find the knockout.