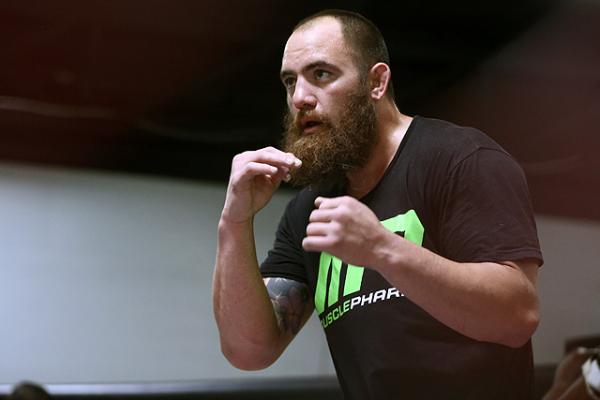 Over the last few months, many challengers have stepped up in the heavyweight division. Champion Fabricio Werdum and former champ Cain Velasquez will dance once more before the division opens back up to new and fresh challenges for the man who emerges with the gold strapped around his waist.

Stipe Miocic is the most recent to step forward after a quick TKO victory over Andrei Arlovski. In the coming months, Josh Barnett will return to action against Ben Rothwell, and the winning fighter in this match-up would be deserving of a shot. There’s also Alistair Overeem, who is currently the third ranked heavyweight in the world and is coming off a win over former champion Junior dos Santos.

Another name to add to the list of title challengers is Travis Browne, who most recently earned a victory over Matt Mitrione.

Browne isn’t exactly a fan-favorite, what with his alleged actions out of the cage that riled up fans. Browne’s merits that put him up there with the rest of the heavyweight contenders are often overlooked in favor of gossipy, tabloid news stories about him.

Browne has bounced back and forth, alternating wins and losses since claiming three straight victories by knockout. During his winning streak, Browne looked every part of a top, up-and-coming fighter with his finishes over the aforementioned Barnett and Overeem. Despite Browne’s recent struggles, the 33-year-old has remained near the top of the divisional rankings. His wins over big names in the division prove just how formidable he can be. Whether his recent struggles are due to the personal problems that have crept up or changing gyms to train out of Glendale Fighting Club under Edmond Tarverdyan, well, that’s a different question in itself.

Browne is still relatively young for a heavyweight. If the aforementioned Werdum has taught fans anything, it’s that age is nothing but a number in the UFC’s biggest weight class. A resurgence can pop up at any time. A fighter can completely change the trajectory of his career at any given moment. Based on Browne’s past successes and a rather successful return to the win column against Mitrione, it isn’t out of the question to think he can pull off a few more victories.

After all, the biggest point to make here about whether or not Browne is a title contender is to point out the rather shallow state of the heavyweight division. Browne isn’t solely a title challenger due to this lack of depth, but it’s hard to deny how much it helps. To drive the point home, the aforementioned Barnett, who returned to the cage in September for the first time in almost two years, is ranked just behind Browne in the UFC’s own rankings. During this span, Barnett had been consistently ranked in or around the top 10 despite being on the sidelines. The division isn’t exactly teeming with talent like, say, the welterweight or lightweight divisions.

This lack of depth helps keep Browne in a position to always be a threat to make a run for the title. It won’t take four or five wins like it would in other divisions, but maybe two or three to really jump into the driver’s seat for the next title shot. It also helps Browne to have the big victories and experience he’s had against the better talent in the division.

Athletes tend to go through slumps. Some regress only to break out and become better than they ever were. In Browne’s case, this is a scary thought. Consider just how good Browne was before he lost to Werdum. He was already displaying devastating power and using elbows and punches to bring his opponents to the deep end before finishing them off.

It just takes one win to turn things around. Browne may very well be a title challenger already, and he certainly will be one after another victory. Anything is possible when you have performed like Browne has performed. In the heavyweight division, there’s a short line to the top. It’s just up to Browne in his upcoming fights to prove he can jump to the front of this line.