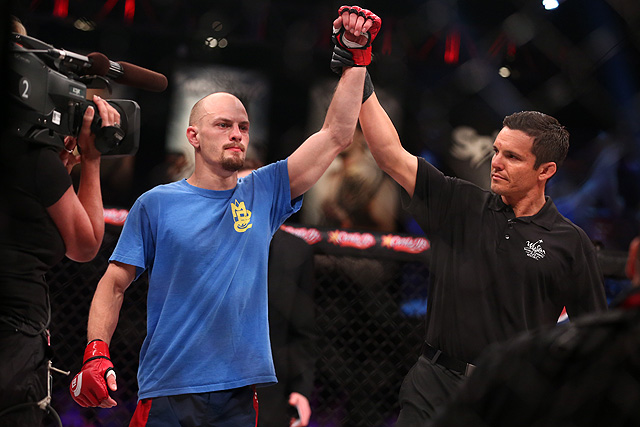 While the big shows take a breather this weekend, Legacy Fighting Championship steps in to fill the void. The promotion’s 52nd offering was initially expected to feature UFC and WEC veteran Damacio Page in a defense of his flyweight title against Matt Schnell. Page suffered a rib injury, however, and Schnell was then slated to meet Jason Sampson. Then, Sampson was scrapped. Now, Schnell is set to tangle with Klayton Mai. The one positive for Schnell through all of these opponent change? He still gets to fight for gold, albeit the interim variety.

Schnell is probably still best known for his time on MTV’s MMA reality series Caged, which followed Schnell and other aspiring mixed martial artists at the earliest stages of their career. Schnell has turned out to be the one legitimate prospect produced by the series. His notoriety led to a pro debut under the Legacy banner. He won two of his first three outings, all bouts hosted by the Texas-based promotion. After picking up another win in the WFC, Schnell returned for his fifth pro bout and suffered his second loss. He rebounded from the loss with six straight wins, including five stoppages and a DQ victory. The majority of Schnell’s victories have come by way of submission, but he has recorded knockout finishes of 11 seconds and 19 seconds. The 26-year-old Schnell has spent the last couple years training out of the American Top Team gym.

It just so happens that Mai was the man to hand Schnell the reality star’s most recent defeat. “The Python” lived up to his moniker by cinching up a choke to force Schnell into submission. It’s just one of a highlight reel of chokes Mai has applied in his nine-fight career. Overall, the 29-year-old, who debuted in 2011, has seven victories via choke submission. Oddly, his only loss — to Bellator veteran Matt Lozano — also came by way of a choke. Mai’s fought and beat Schnell in his next fight after the loss. The Octagon MMA product has a background in wrestling and Brazilian Jiu-Jitsu, and he stepped up to replace Sampson, his training partner, when Sampson was forced to withdraw due to an injury.

Schnell, despite checking in as the shorter fighter, has roughly three inches in reach, both in his arms and legs, over Mai. In their first meeting, the pair looked evenly matched on the feet, but Schnell was at a disadvantage in the wrestling department. Mai went for guillotines at any opening, even looking for the choke at least twice from a standing position. Schnell made a costly mistake by going for a trip takedown while Mai had him in a choke, which ultimately led to the finish.

Schnell is the high-profile star in this match-up, and Legacy has given him a chance at not only the championship belt, but also an opportunity to avenge a previous loss. Schnell’s stock has been rising, but Mai has the chance to play spoiler once again. Their first fight proved that Mai has the power to rattle Schnell, the striking to keep pacing with the longer fighter and, of course, the ability to find the neck and get the tap. The question in this second go-around revolves around how well Schnell learned and adapted based on that defeat. Schnell has been training with ATT for much of the time following the fight, and his main focus has been on shoring up his wrestling game. However, he’s preparing for Mai on short notice once again — did he get enough time to work on defending against the chokes that Mai loves to use?

This is a very even affair. If neither man gets rocked for five rounds, it could turn into a razor-thin decision where each strikes matters and takedowns — and Schnell’s ability to stuff them — could make all the difference. However, Mai’s ability to initiate the clinch and his aggressiveness with pursuing the choke could be too much for Schnell once again.

Russia has become a hotbed for stunningly deep cards in recent months. Akhmat Fight Show seemed to be running away from the competition with the sheer depth of its events, but Absolute Championship Berkut has rallied back with its own stacked offering. ACB’s 32nd event, dubbed “The Battle of Lions,” features a lengthy roster of prospects and one name — Mike Kyle — that should be familiar to American fight fans. Of course, there’s already plenty of buzz surrounding the surge in Russian prospects inside the Octagon, and this card could certainly contribute to the cause. Bantamweight champion Piotr Yan and challenger Magomed Magomedov are two of the most promising up-and-comers to keep an eye on.

The 23-year-old Yan debuted in 2014 and worked his way to the championship in 2015 with victories over veteran Renato Velame in the quarterfinals, newcomer Kharon Orzumiev in the semis and fellow prospect Murad Kalamov in the finals. “No Mercy” has two victories by way of strikes and one win via submission.

Magomedov, 24, is only one year older than the champ, but he has been competing professionally for several years longer than his opponent. “Tiger” made his debut in 2011 under the M-1 Global banner and picked up a victory. He stumbled in his sophomore appearance, but he has been perfect ever since. The DagFighter product has notched notable wins over veterans Yuri Maia, Paata Robakidze and Bruno Dias. He has an even four wins each by way of knockout, submission and decision.

Yan has put together an impressive resume in a short time, but the Alexander Nevsky fighter has trended toward stoppage victories against inexperienced opponents while going the distance with the veterans he has met. Magomedov, who was signed to the World Series of Fighting in 2015 but has never fought for the promotion, can be expected to push Yan to his limits at the very least.

Magomedov has a mix of Sanda, kick-jitsu and wrestling in his arsenal. If he can effectively set up his takedowns, he should land in top position and work over Yan on the ground. Yan, meanwhile, needs to prove that he can produce a solid offensive campaign against someone who has more than one previous fight under their belt. Magomedov, the older and more experienced man, will fight his way to the decision nod in this contest.

When Bluegrass MMA handed out its 2015 MMA awards, the “Pro Fighter of the Year” contest boiled down to a battle between featherweight standouts Dominic Mazzotta and Rob Hanna. Hanna emerged with the most ballots cast in his favor and took home the top honor. Now, the pair goes to battle inside the cage for another honor: the Pinnacle Fighting Championships vacant featherweight title. The championship contest tops the bill at this weekend’s Pinnacle FC 13 event.

The 28-year-old Mazzotta made his pro debut in 2013 and scored three stoppage victories before he encountered current UFC fighter Cody Garbrandt and suffered his only career loss. The Ed Vincent MMA product responded to the defeat by reeling off six straight victories, including five submissions. Mazzotta, who raced go-karts in his youth and also trained in taekwondo, sports a 7-1 mark as an amateur to go along with his 9-1 pro record.

Hanna 31, is the taller and older fighter in this contest. He’s also likely to be the bigger man after having spent the majority of his career at lightweight. The Ohio-based fight is perfect through his first seven fights, but he has stopped just three of his adversaries. Hanna has ramped up his competition in recent outings while also filling his trophy case. He defeated Mike Wilkins to claim the Gladiators of the Cage lightweight strap and then edged Matthew DiMarcantonio on the scorecards to snatch the IT Fight Series crown. This will be Hanna’s third consecutive title outing.

Both fighters have talked a good game leading up to this fight, promising to finish the other. The likelihood of one fighter following through on this promise? Well, Hanna’s finishing rate isn’t even at 50 percent, so he’s facing an uphill battle. Mazzotta, meanwhile, has turned in some impressive work in finishes of opponents like Varon Webb and Justin King. Mazzotta is quick to take his opponent’s back and sink in the choke, and he’s been especially successful with this approach over his last four fights, all of which were choke submissions.

Mazzotta displays better movement on the feet and tends to mix in more kicks within his striking attack. His aggressive submission game is his best weapon in this fight against a fighter in Hanna who tends to be a more plodding grinder. Mazzotta has looked good recently, and it’s up to Hanna to slow down “The Honey Badger’s” movement and plant him on the mat or neutralize him in the clinch. That’s easier said than done, especially when Mazzotta will be likely to go for the neck or an arm when he ends up in the clinch or in a scramble on the canvas.

Mazzotta’s athleticism and finishing ability will prove too much for Hanna to handle. Mazzotta will continue his streak of submission victories with a finish of Hanna midway through this title affair.