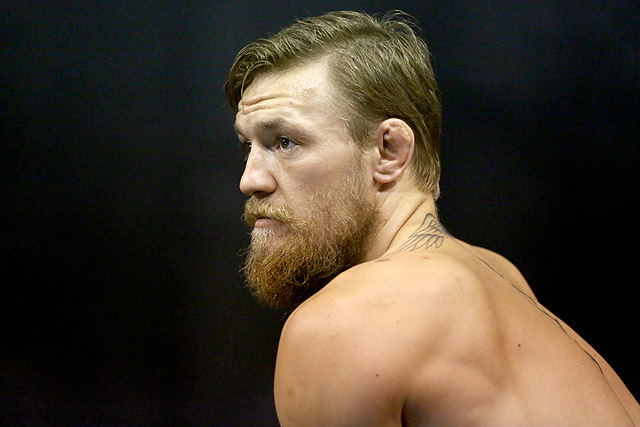 On Saturday, Dec. 12, the UFC hosted UFC 194: Aldo vs. McGregor from the MGM Grand Garden Arena in Las Vegas.

In the night’s main event, UFC featherweight champion Jose Aldo met interim champion Conor McGregor. The pair were originally scheduled to meet at UFC 189 in July, following an exhaustive media tour that took the fighters to both Aldo’s native Brazil and McGregor’s Ireland. However, the champion Aldo suffered a rib injury prior to the bout and was forced to pull out at the last-minute. He was replaced by multiple-time title challenger Chad Mendes, whom McGregor defeated by second-round TKO.

Aldo had been out of action since last October when he defeated the aforementioned Mendes via unanimous decision at UFC 179 in Rio de Janeiro. The win marked Aldo’s seventh straight defense of his UFC belt and 10th consecutive title fight win dating back to the WEC. The 28-year-old had never tasted defeat in the UFC and rode an 18-fight winning streak that dates back to 2006.

McGregor, meanwhile, was also unbeaten inside the Octagon. The Irishman entered the title affair on the momentum of a 14-fight winning streak of his own. Five of his six wins under the UFC banner had come by way of knockout, including his finish of Mendes in July.

UFC gold was also on the line in the co-main event as middleweight kingpin Chris Weidman took on former Strikeforce titleholder Luke Rockhold.

It only took 13 seconds for Ireland’s Conor McGregor to dethrone Brazil’s Jose Aldo and capture the featherweight title. Aldo charged forward with a left hand that connected, but McGregor’s counter left hand sent Aldo crashing to the canvas. A pair of hammerfists followed and referee John McCarthy stepped in to hand McGregor the victory.

There’s a new middleweight champion as Luke Rockhold battered Chris Weidman and earned a fourth-round TKO. Weidman started the fight by taking Rockhold’s back and threatening him with a choke. Rockhold escaped and the pair began exchanging body kicks. Round two was all Rockhold as he continued to land kicks to the body of Weidman. Weidman took control early in round three with his striking, but he threw a wild wheel kick that missed and allowed Rockhold to take him down. Rockhold took his back and then moved to mount. He completely battered Weidman with punches and elbows that bloodied Weidman. In the fourth round, Rockhold again gained top position, but this time he unloaded and forced referee Herb Dean to halt the contest.

Cuba’s Yoel Romero outlasted Brazil’s Ronaldo “Jacare” Souza and claimed a hard-fought split decision win. After a brief feeling out period, Romero delivered a spinning back fist that dropped Jacare. The Brazilian coerced Romero into his guard, but was clearly rocked. Romero dropped elbows and punches until the round expired. The middle stanza was slow paced, as Jacare recovered from the heavy damage in the first. The final round was all Jacare, as he took down the wrestling stalwart and attacked with submissions and strikes. However, it was not enough as Romero eked out the win.

Former title challenger Demian Maia put on a grappling clinic against Iceland’s Gunnar Nelson. The Brazilian wasted little time putting Nelson on the mat and dominating the fight. Maia transitioned between the mount and Nelson’s back, delivering a steady stream of left hands and elbows. Nelson was able to survive, but his offense was completely stifled by Maia’s ground superiority. Maia threatened with an armbar and multiple rear-naked choke attempts, but he was unable to finish Nelson. Nonetheless, Maia took lopsided scorecards from all three judges.

Featherweight Max Holloway continued his march up the ranks with a clear-cut decision win over veteran Jeremy Stephens. Holloway controlled the range throughout the affair, preventing Stephens from unloading his powerful hands. Stephens desperately tried to get the fight to the ground, but Holloway showcased great balance and takedown defense. Holloway surprised Stephens in round three with a takedown in the final round and threatened with multiple chokes. Stephens lasted until the final bell, but it was Holloway’s night.

Former WEC champion Urijah Faber got a huge test against Frankie Saenz. Faber was aggressive on the feet, but Saenz countered well with uppercuts and inside leg kicks to keep Faber off balance. Faber landed a knee in round two that rocked Saenz. He went for the kill, unleashing a series of elbows, but Saenz did not go down. The pair battled hard in the third round, but Faber secured a late takedown that earned him the nod from the judges.

Strawweight Tecia Torres kept her perfect record intact with a one-sided decision win over short notice opponent Jocelyn Jones-Lybarger. Jones-Lybarger marched forward in the opening round, but Torres was able to counter and push the fight along the cage. It was more of the same in round two, but Torres was able to get the fight to the ground and deliver strikes from the top. Torres opened up with combinations in the third, securing the win on the scorecards.

Another TUF Brazil winner, Warlley Alves, remained undefeated by submitting Colby Covington with a first-round guillotine. Alves landed with a kick to the body that prompted a takedown from Covington. Alves worked back to his feet, but Covington looked for another takedown, Alves latched onto his neck. Covington tried to slam his way free, but was forced to tap.

TUF Brazil winner Leonardo Santos didn’t need his world class grappling skills, as he stopped Kevin Lee with a massive right hand in the first round. The pair traded on the feet until Santos scored with a big takedown. Lee avoided danger and the fight returned to the feet. Santos caught Lee with a right hand flush on the jaw that dropped him. Santos delivered a steady diet of punches and the referee intervened.

Magomed Mustafaev needed less than two minutes to end the night of Joe Proctor. Proctor landed a combination early, but Mustafaev took over after that. He connected with a heavy right hand and followed with a left kick to the body. Proctor backed against the fence and Mustafaev flurried for the TKO finish.

In a back-and-forth stand-up affair, Hawaii’s Yancy Medeiros eked out a split decision from Canada’s John Makdessi. Medeiros threw kicks with volume and tried to keep Makdessi at range. Makdessi opened up in the second frame and began to land with regularity. The final stanza was going Makdessi’s way, but Medeiros dropped him late in the fight. That was enough to convince two of the judges to hand him the fight.

Returning from a long injury layoff, TUF 11 winner Court McGee outworked Brazilian Marcio Alexandre to claim a unanimous decision win. Alexandre scored early with his kicks, but McGee’s forward pressure and grinding wrestling game along the fence were the difference.