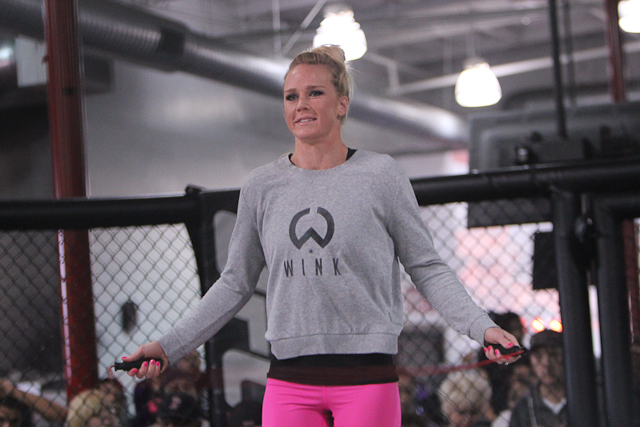 There were plenty of ways to describe Holly Holm’s Octagon debut earlier this year. Timid, nervous, overwhelmed; those kinds of adjectives ended up becoming the first words out of everyone’s mouths when “The Preacher’s Daughter’s” first bout in the UFC was discussed. After months of hype and talk of Holm becoming the fighter with the potential to give Ronda Rousey the fight of her life, Holm squeaked by Raquel Pennington, a .500 fighter, in a bout that was much closer than it needed to be. It was underwhelming at the least and highly disappointing at worst. Holm didn’t perform like the striking dynamo that fans had been told they were going to see and, worse, she did it in front of a pay-per-view crowd that, less than an hour after greeting Holm’s win with lackadaisical applause, watched Rousey catch Cat Zingano in a fight-ending submission in just 14 seconds.

The myth that Holm was going to be able to walk into the Octagon and become the scariest opponent Rousey has ever seen was busted pretty quickly. Most people would say that was probably the best case scenario for “The Preacher’s Daughter.” After some suggestions that Holm may have been able to use her co-main event status in her debut at UFC 184 to earn a shot at the champion were shut down by a combination of Holm’s performance and UFC President Dana White later that night, a good amount of the hype and pressure sitting on the Jackson-Winkeljohn fighter’s shoulders was lifted. Holm could just focus on improving inside the Octagon without having to worry about a potential fight with Rousey.

There was so much pressure on Holm in her debut that it was understandable that her nerves and all of the hype she was carrying would make her less aggressive and a little hesitant to put herself in harm’s way. If Holm would have lost her debut by coming out and recklessly firing off punches and kicks only to get caught, it would have highly diminished her chances at nearing a bantamweight title shot at any point in the future. Granted, Holm almost became too cautious and allowed Pennington to steal a decision, but her performance in her debut only did her a favor by getting rid of a lot of her hype while keeping her spotless record intact. Holm wasn’t going to be thrown into the fire against a top women’s bantamweight in her next showing and, with a lot less on the line, fight fans hoped that Holm would allow herself to open up in her next appearance. We hoped.

Holm returned to the cage to take on Marion Reneau at UFC Fight Night 71 in San Diego this week and, sadly, we more or less saw the same fighter that disappointed fight fans earlier this year. There were a few improvements in Holm’s second performance. The striker scored her first takedown in the Octagon and outworked her opponent to a near 3-1 striking ratio on the feet, much better than the slight advantage in numbers Holm put up against Pennington. Furthermore, her output was insane, as Holm threw over 100 more strikes than Reneau over the course of three rounds. However, outside of a few flurries in the final round, fans still haven’t seen the Holm they’d been hoping for when the decorated boxing champion and skilled kickboxer joined the UFC.

While Holm’s style and body language during the Pennington fight could have been described as timid or nervous, her win over Reneau felt a little more methodical and cautious. After letting Pennington get inside and land a few too many times in her debut, Holm’s already fantastic footwork was even better in her second Octagon appearance, as she completely controlled the cage and kept Reneau at an uncomfortable distance throughout the bout. Using a wide variety of kicks, Holm was able to keep Reneau way outside of striking range for the vast majority of the bout and was able to pretty clearly pick her opponent apart, almost like Lyoto Machida did against inferior opponents once upon a time. It was a really solid performance that most fans would be comfortable with if Holm was your average women’s bantamweight.

The thing is, Holm isn’t the average women’s bantamweight. Even a performance that would deliver a solid “B” grade for most fighters isn’t going to be enough when it comes to “The Preacher’s Daughter.” After a debut that was as close to disastrous as it could have possibly been while still earning a win, Holm desperately needed to redeem herself by putting on a performance to remember against Reneau. She failed. Now, not only are more and more fight fans writing her off as a potential force to be reckoned with at 135 pounds, but back-to-back lackluster fights have put Holm in danger of becoming the dreaded “boring” fighter that the UFC hesitates to promote.

With Rousey systematically taking out the rest of the division, there’s no reason to doubt Holm’s ability to get a title shot quite yet. However, the excitement about a potential bout between the two has been ripped apart by Holm’s first couple of UFC appearances. It’s going to take something other than another lopsided decision with little damage done to her opponent before any of that’s going to change. Holm will be a future title contender — and there are things about her game that could provide Rousey with some interesting problems — but the New Mexico-based fighter’s star is shining a little less brightly than it was six months ago.

More than anything, the UFC needs a female fighter to look even half as dominant as Rousey has during her UFC run in order to give the champ her first major rival since Miesha Tate. If Holm can start to open up and become the fighter her talent dictates she should be, then she does have the potential to fit that bill. Under the right circumstances, Rousey vs. Holm could be the one of the biggest women’s MMA fights of all time and a true benchmark of “Rowdy’s” career, regardless of the outcome. However, a few more Holm performances like the ones she’s had in her first two UFC bouts and “The Preacher’s Daughter” will become something few would have believed when she first joined the organization last year. She could become just another name on Rousey’s list of victims.