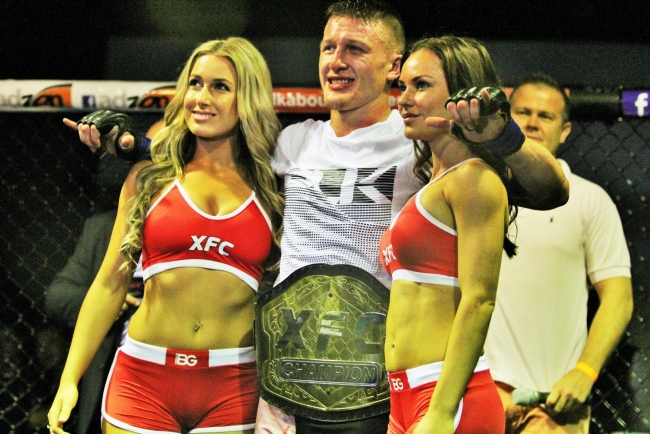 It was a rockstar welcome home.

As the 21-year-old kid walked off the plane, a small crowd gathered at the airport. People were cheering and clapping. This was the kind of welcome home that a football team would get, and there stood Shane Young, a fighter with a 4-1 professional record and a major Australian title in his hand.

It’s a testament to the passion New Zealanders show as a sporting nation. Young could certainly get accustomed to this as his career continues to develop. The welcoming at the airport was a nice cherry on top of a great weekend for the featherweight. Winning a title was one thing, but having the pride of his fellow countrymen was something completely different.

“I liked the recognition. It was like a payoff for all the hard work that I’ve put in over the last six years,” Young told Combat Press. “It was good to get my first belt internationally instead of having to beat up some tough Kiwi for it [laughs].”

At XFC 22 on Nov. 1, 2014, Young was able to avenge his lone career loss when he defeated Adrian Rodriguez in the third round of their bout to walk away with the XFC featherweight title.

“Even re-challenging for the title, I just treated it like another fight. And I think that’s what messed me up in the first one — I put too much pressure on myself because it was for a belt,” Young admitted. “The only extent that a belt matters is that you walk to the cage with the belt. Other than that, it’s just another fight.

“It was probably the best moment of my career, to be honest. That and my professional debut. It felt like that all over again — righting the wrong. I felt that I underperformed in that first fight, and I think it mighta been the pressure of fighting internationally. And once I just got through that, I felt it was just a stepping stone and a bit of a misstep, and now I’m ready to continue on from there. It was a big win. It was a good feeling to win that fight.”

With an undefeated amateur record, as well as a three-fight winning streak to begin his professional career, everything was looking up for Young when he went into his very first title fight. It wasn’t meant to be, though. Young walked away on the wrong end of a split decision in his very first fight outside of New Zealand.

“I felt that I underperformed and I could have done better, but I still think I had done enough to win that fight,” Young said. “I can understand the fact that to beat the champ you’ve really gotta win decisively, and I left it too close. It was the only fight I’d had in almost over two years where I didn’t finish the guy in the first round. That was the first time I’d gone out of the first round in two years.”

XFC is the oldest mixed martial arts promotion in Australia, and its featherweight title ranks Young amongst some of the best fighters in the country. Even though he is from New Zealand, he is still someone against whom Australian fighters want to be matched up. That makes Young even hungrier to succeed.

Young’s first featherweight title defense comes on May 23 at XFC 24 when he faces Julian “Julz the Jackal” Rabaud in Brisbane, Australia. The pair was supposed to meet at XFC 23, but Rabaud sustained an injury during training and Young was forced to move up to lightweight to compete on the card. The change in opponent led to a meeting with Cage Warriors veteran Damien Brown for the XFC lightweight title. Although Young lost the hard-fought contest against Brown, he still holds the XFC featherweight title. On May 23, he finally gets to defend it.

“I took the fight against Damien knowing that he was a much tougher and more experienced opponent than Julz. And if I’m being honest, I don’t believe there was an injury,” Young said. “I’ve never pulled out of a fight and I’ve taken plenty of fights on short notice. I know if I was ever to pull out of a fight because of an injury, however, there would be x-rays and apologies all over the internet from me. I’m not the kind of fighter that trains hard for a fight and then wimps out when it comes time to sign the waiver. I couldn’t fight him, so I had to move up a weight class and fight for that title to stay busy. That’s the only way you’ll get anywhere as a fighter, [is by] taking fights.

“Five weeks out, I feel a whole lot better than what I did five weeks out from the [Rodriguez] fight. I feel like with this next guy, he’s nowhere near as dangerous as [Adrian] ‘Road Rage’ [Rodriguez], and I feel that I can mix it up a bit with my training and go in there and have a lot of fun and doing some fun new stuff and try and put on more of a showcase. This is when Australia will get to see the real Shane Young.”

Rabaud is easily the most vocal fighter on the Australian circuit. He has a passionate fan base and detractors who are just as fervent. When the time came for Young to sign up for his first featherweight title defense, it didn’t take long for him to hone in on Rabaud, who had just signed to a multi-fight exclusive contract with the XFC and was targeting his debut at featherweight in 2015.

“After I’d won the fight against ‘Road Rage’ — I think the week of or a fortnight after — I actually asked [XFC promoter] Justin [Lawrence] if I could fight Julz,” Young revealed. “I knew that he’d hype the fight a lot and he’d promote the fight, and that just gets me roaring to go. I was keen to put him in his place. I mean, he’s probably a nice guy outside of the cage, but it’s just his mouth has gotten him into trouble. His mouth is writing checks that his body can’t cash really [laughs].

“I was thinkin’ at the start that I was gonna get up on all my social media and try and hype it as much as he is, but I’m just gonna let my performance tell the tale on the night. I’m not even gonna bother trying to get Instagram followers. There’s no point. I’m not covered in tattoos, I don’t have a beard, I’m not marketable in that way, but my skill is gonna shine through, and skill overcomes a glass chin hidden by a beard. I think he has a few insecurities hiding under all those tattoos. I don’t think that he’s as big of a name as he thinks he is.

“I think I’m gonna have to be looking for another big fight [after this one]. This is gonna be a good, fun exhibition fight for me where everyone will get to see my real potential. It will be bigger for him to beat me than what it is for me to beat him, for our careers, but that’s not gonna happen. He’s going down.”

XFC 24 takes place on May 23 at the Mansfield Tavern in Brisbane, Australia. To purchase tickets to the event, or for more information on XFC 24, visit XFC on Facebook.