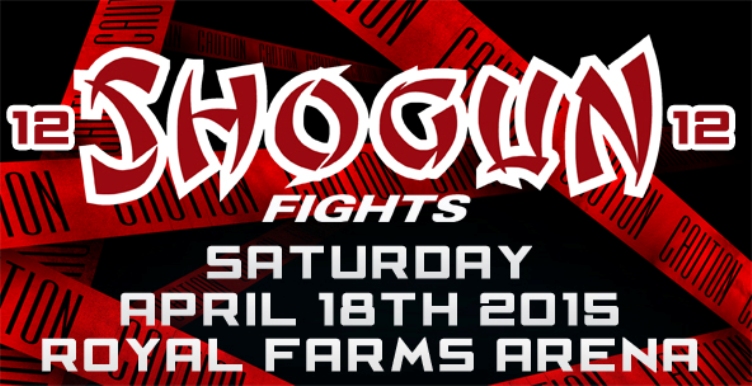 Charm City was host to a charmed edition of Shogun Fights on Saturday, April 18. The 12th incarnation of the Baltimore-based mixed martial arts event saw its first champion crowned in a brutal, bloody affair where the victor rose to the occasion through a miraculous comeback.

The crowd was hot all night long, but its exuberance grew over the course of Shogun Fights’ first-ever title fight. The bout began with Terrill peppering Presley with shots, with it being revealed after the fight that Terrill’s very first punch broke Presley’s nose and caused his blood to flow. Terrill basically picked his shots in the first round, and a late takedown by Terrill solidified the first round in his favor.

Presley fared slightly better in the second round, unleashing a barrage of his own before suffering more precision strikes from Terrill. At this point, the white Shogun Fights canvas turned a shade of pink as Presley’s blood continued to run. Presley found himself down two rounds, with a broken nose for his troubles.

However, Presley emerged in the third round as a house of fire, hammering away on Terrill and causing him to stumble before Terrill managed another takedown. But it was for naught as Presley reversed position, locked in a guillotine choke and scored a submission victory at 3:10 of the final round.

The co-main event started with both fighters trading fists before they went to the mat and Delbrugge landed more punches. The second round saw the fight turn into a wrestling match, as another takedown by Delbrugge kept the fight on the ground and resulted in a kimura attempt by Delbrugge. Somehow, Iormashvilli escaped and made it to the third and final round.

The fight returned to the mat in the final round, with both guys attempting submissions and going for the finish. However, Delbrugge secured the unanimous decision victory.

Sullivan was dominant from the onset of this fight, landing a series of takedowns on Vinyard in the first round and controlling from the top position while unleashing some vicious ground-and-pound. Sullivan continued his dominance in the second round, returning to top position and landing more shots before finishing Vinyard off in the third round with – you guessed it – a big takedown and even more ground-and-pound for a resounding victory.

This fight drew the ire of the crowd early, as both fighters were reluctant to engage and spent the majority of the first round circling each other, before Isata landed a few shots and late takedown. Their reluctance to engage continued on the mat in the second round, where despite fighting on the ground they were stood up by the referee and spent the rest of the round circling each other. At this point, the crowd began booing them lustily.

The third round began with an awkward hug between the fighters before they engaged in little to no action for the remainder of the fight, continuing to circle each other and putting forth very little attempts to engage. Isata was declared the victor and acknowledged the boos after the fight.

Fisher and Zea went to the mat early in their fight, where Zea displayed some excellent jiu-jitsu skills. However, Fisher was able to reverse his position and locked in a guillotine choke for a quick submission victory.

Jones, the Baltimore native and favorite, brought the crowd to its feet following intermission with his relentless grappling skills. He took Cain down in the first round and attempted multiple submissions, including a rear-naked choke and eventual kimura that gave him his fifth consecutive victory at Shogun Fights.

Another local favorite in Root made his Shogun Fights return after a lengthy layoff. He wasted no time engaging in his bread and butter, as he put on a Brazilian Jiu-Jitsu clinic in the first round. He landed multiple takedowns on Gaudreau and was unyielding in his submission attempts. Root seemed to have victory in hand when he locked in a rear-naked choke several times on Gaudreau, who somehow escaped and even attempted a rear-naked choke of his own as the first round ended.

More grappling was in store in round two, as Gaudreau looked to be the dominant fighter with trying another rear-naked choke. However, Root reversed his position, took Gaudreau’s back once again, and this time made it count as he secured a submission victory.

Watley’s wrestling skills were on display early in this fight, as he took Chacon down and wasted no time locking in a rear-naked choke to land a swift submission win.

Submissions were in plentiful supply at Shogun Fights 12, including in this fight. Otwell displayed his wrestling skills by taking Thompson to the mat and taking his back. When Thompson made the fatal error of looking up and exposing his neck, Otwell locked in a rear-naked choke for yet another first-round victory.

Melo looked like he caught Mercer with a stiff left hook early in this fight, but an unfortunate groin shot to Mercer halted Melo’s momentum. When Mercer recovered, he stuffed a takedown attempt by Melo and traded shots with him as the round ended.

The two fighters continued to exchange shots in round two, with Melo landing a few leg kicks for good measure. In the third and final around, Mercer stuffed more of Melo’s takedown attempts and outstruck Melo on his way to a majority decision victory.

Both fighters wasted no time getting to it in round one, as Chung landed a pair of takedowns and traded position with Trainor on the mat. This was an extremely difficult round to score, as both fighters were extremely active and relentless.

They returned to the mat in round two, and Chung tried some leg submissions on Trainor before taking position on his back and locking in a rear-naked choke for the duke.

The kickoff to Shogun Fights 12 was also Stirn’s professional debut. He weathered a series of spinning back kicks from Torchia early before both fighters were tied up against the cage. Stirn took advantage of a slip by Torchia when attempting another kick, and he used Torchia’s mistake to achieve top position and hammer Torchia with elbows and punches that left Torchia bloodied and gave Stirn the evening’s only TKO victory.