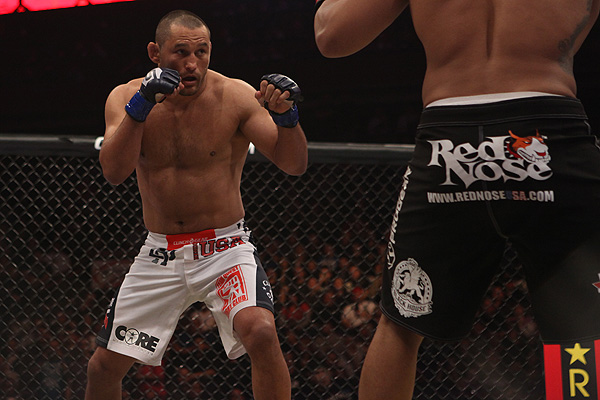 In an evening filled with highlight-reel finishes, Dan Henderson served up the biggest of them all with a stunning finish of Tim Boetsch in the main event. The legendary middleweight landed a right hand that rocked Boetsch. The 44-year-old didn’t let up, following with a knee, another right hand and an uppercut that put Boetsch on the mat. Henderson continued to rain down blows for the knockout victory just 28 seconds into the contest.

The night’s trend of quick finishes extended into the co-headliner, where heavyweights Ben Rothwell and Matt Mitrione collided. After some early exchanges on the feet, Mitrione changed levels and shot in for the takedown. Rothwell quickly wrapped up Mitrione’s neck in a front choke. Mitrione was forced to tap with both hands just seconds after the choke was locked in.

The lightweight division definitely suits former featherweight Dustin Poirier well. Poirier absolutely slaughtered opponent Yancy Medeiros. The hometown favorite dropped Medeiros twice early in the first round, but he remained patient. Poirier sought a rear-naked choke, but Medeiros fended it off and eventually escaped to his feet. Poirier continued to connect, landing a shot to the body that hurt Medeiros. He battered Medeiros with punches against the cage until referee “Big” John McCarthy had seen enough. Poirier has now won his first two fights since moving up to 155 pounds.

Featherweights Brian Ortega and Thiago Tavares engaged in an absolute war that lasted into the third round. Tavares appeared to be up on the scorecards following two rounds of wrestling and ground-and-pound. Ortega was still threatening from the bottom, where he landed elbows that cut Tavares open and attacked constantly with submissions. In the third frame, Ortega started scoring more effectively in the stand-up while fending off the Brazilian’s takedowns. Ortega landed a left and a right that sent Tavares reeling to the canvas. Ortega followed the Brazilian to the mat and gained the mount, where he rained down punches for the TKO finish.

Anthony Birchak had to wait 10 months to finally get in the cage with fellow bantamweight Joe Soto, but he made up for the long wait with a fast knockout of the former title challenger. Birchak dropped Soto with a right hand and didn’t give the Bellator veteran a chance to recover. Birchak continued to attack while Soto first went after a leg and then stood back up. Birchak’s sustained flurry sent Soto crashing back to the mat face first and forced referee “Big” John McCarthy to intervene.

Bantamweight Francisco Rivera made quick work of Alex Caceres. Rivera connected early with a left hook that dropped Caceres. Rivera immediately pounced and landed a series of ground-and-pound strikes to finish off his opponent. The knockout finish came at just 21 seconds of the first round.

In a wild battle of heavyweight sluggers, Shawn Jordan proved to be the better man against Derrick Lewis. The fight, a rematch of a 2010 encounter Jordan also won, seemed destined for a finish, and Jordan delivered it just 48 seconds into the second stanza. He landed a kick that sent the charging Lewis staggering backward. Jordan charged in and swarmed Lewis with strikes while gaining top position. Lewis gave up his back and Jordan continued to hammer away with ground-and-pound until the referee had seen enough.

Welterweight veteran Brian Ebersole suffered a knee injury in the first round of his fight with Omari Akhmedov and couldn’t answer the bell for round two. Akhmedov was awarded with the TKO victory.

Chris Wade’s wrestling proved to be the difference in his lightweight clash with Christos Giagos. Wade’s takedowns and top control were enough to earn him the unanimous nod on the scorecards.

After nearly a full three closely contested rounds, Joe Proctor opted to leave the judges out of it in his lightweight contest against Justin Edwards. Proctor secured a guillotine choke as the clock wound down and rendered Edwards unconscious with just two seconds remaining in the fight.

Middleweights Jake Collier and Ricardo Abreu engaged in a three-round war. The fight was contested primarily on the feet, and the pair certainly kept it close. Collier emerged with a razor-thin split decision.