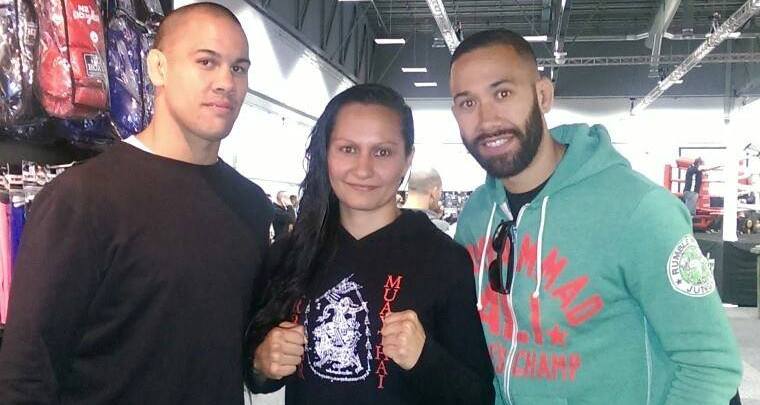 Eight rounds of fighting in one night. A world champion boxer, an acclaimed jiu-jitsu practitioner and a tough local girl who could take a punch. That’s what Faith Van Duin endured on her way to becoming the first New Zealand fighter to sign with Invicta Fighting Championships.

Time passed and behind-the-scenes setbacks forced Van Duin to the sidelines for months. Almost a year later—to the day of her eight rounds of fighting, in fact—Van Duin suffered her first professional loss. The momentum that she was going to be riding into her debut with Invicta was gone. Luckily, though, it wouldn’t be forgotten.

“It feels like I ain’t going to let it happen again,” Van Duin proclaimed to Combat Press. “That loss helped me more than anything. I’m glad I had it before my debut, as it showed me my holes. And with that, I’ve fixed them and I’m coming back stronger.”

As the first New Zealand woman to be given the chance to fight for Invicta, Van Duin holds the pride of a very passionate nation on her shoulders. While mixed martial arts isn’t a mainstream sport in New Zealand by any means, the country will always support its athletes, and Van Duin knows that with every step she takes as she enters the Invicta FC cage, her country will be right behind her.

“A win will see a lot more publicity, but since my debut has been announced I’ve had more already,” Van Duin said. “Being on the world stage and representing New Zealand—wow, just wow—to represent New Zealand and my culture is a privilege and an honor.

“It feels incredible, so exciting and awesome, but what makes it that much better is how amazing the Invicta crew are looking after us. This was my goal from the beginning, and it feels like everything I’ve done to this point is right.”

Traveling from the Oceania region to North America is never a pleasant experience. Whether it’s economy or first class, the flight time is still the same. It’s long, and it’s always going to be painful. Van Duin knew exactly what was coming when her flight to Houston was booked, but the end goal was certainly worth what she had to go through when that plane disembarked.

“It was a huge trip, as I left Papamoa at 1 a.m. and was at the airport from 4 a.m. when my mum left and my flight was at 12 p.m.,” Van Duin recalled. “I was too tired to think, but once I got to Honolulu, I started smiling and thinking, ‘Damn, I’m actually going to be on Invicta.’”

For Van Duin, it’s not all about winning fights and being able to showcase her skills on an international broadcast. Her debut with Invicta FC is proof to her young daughters that anything is possible. Without their support and the support of her family, Van Duin wouldn’t be standing in front of this life-changing opportunity.

“My girls are the reason I’m doing this. So, in saying that, it means everything to me,” Van Duin admitted. “If they didn’t like it or it was bad for them, I wouldn’t be doing it. Without all [the family] help, it would be so much harder to do what I do, so thank you all so much for everything. Thank you to all my family and friends. All the support you all give is unbelievable and pushes me to be better and better every day. Without you all, I wouldn’t be the person I am today, and thank you to my mama, who is right beside me in Houston, for everything I do and will continue to do.”

For her debut with the all-women’s promotion, Van Duin has drawn Charmaine Tweet, who is set to make her return to the featherweight division. Tweet comes into the fight with back-to-back wins, with her last Invicta showing ending in a first-round TKO victory over Team Alpha Male’s Veronica Rothenhausler. Tweet is the No. 1 ranked lightweight fighter in the Combat Press rankings, and she is a challenge that Van Duin is more than happy to have in front of her.

“You have to fight the best to be the best,” she exclaimed. “My nerves are all over the place, but I’m just so excited and that’s what’s taking over. This is where I wanna be. My life will be the same, but with this win it will be one step closer to getting that belt.”

Faith would like to thank her trainers: Regy Yamat, Warrior Muay Thai, Kelvin “Crazy Horse” Joseph Hybrid MMA, Mark Grayling Mount Marlin Wrestling Club, Hemi Niha and TKO Boxing. She adds,“Without all your help, support and been so welcoming, I wouldn’t be the fighter I am today. So thank you all from the bottom of my heart. Now, let’s win this fight!” She would also like to thank Scott and Christine from The Martial Arts Academy for being so welcome and supportive, her manager, Chris Vender, for all the support and being there for her, her training partners for sacrificing their time to help her train for this fight, Mass Nutrition Mount Maunganui, GMP Guitars, Dragon Do for all of her fight gear, Kiwifighter, Colorworks for all her prints, Bobby’s Fresh Fish Markets, Mark Miller, Daniel Daines-Hutt, Nige Pelvin and Paul McMah for all the awesome prizes that helped with her raffles, her brothers, as well as her sister, Sarah, for helping with everything that she does and letting her have two weeks off work and looking after her girls with her Aunty Phillippa. Last, she would like to thank her daughters, who support her every day, for believing in her and pushing her more than anyone to be the best she can be—“Without them I would be empty. Love you all.” Follow Van Duin on Twitter: @faithimmortal
Advertisement