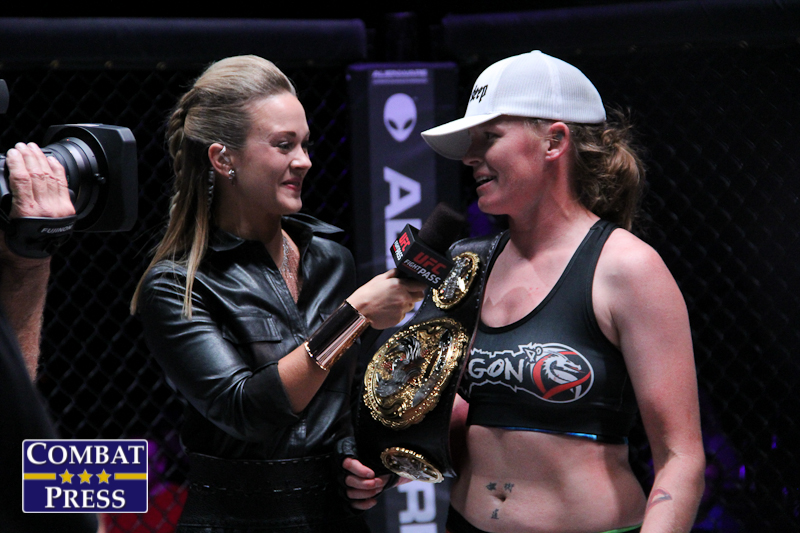 Invicta FC’s Tonya Evinger Deserves a Shot in the UFC

A criticism of the UFC women’s bantamweight division that’s becoming more prevalent is its lack of depth. Reigning champion Ronda Rousey has run completely roughshod over the division since capturing the title in 2013, and her next title defense in November is against Holly Holm, an opponent who seems just as overmatched as Rousey’s previous foes.

However, there’s another champion lurking out there who has faced some of the sport’s best. With a couple of UFC fights under her belt, she could become a worthy challenger to Rousey. As an added bonus, she has the personality to help sell a potential “champion vs. champion” fight.

No, I’m not talking about Cristiane “Cyborg” Justino, Invicta FC’s featherweight champion and longtime Rousey rival. The potential fight between Rousey and Cyborg has been discussed to death. I’m talking about Tonya Evinger, Invicta’s bantamweight champion.

Evinger has competed in mixed martial arts since 2006 and faced some of the most well-known female fighters around, including Gina Carano, Sara McMann, Alexis Davis and Julie Kedzie. She’s currently on an eight-fight winning streak, including her most recent title defense against Pannie Kianzad at Invicta FC 14 earlier this month.

Evinger goes by the nickname “Triple Threat,” a moniker that fits since her base is in wrestling and she also boasts an impressive submission and striking game. Of Evinger’s last eight wins, all but two came via a TKO or submission. Evinger nearly took Irene Aldana’s arm home with her when she won the Invicta bantamweight title in July.

Evinger previously had a brush with the UFC when she competed for a spot on season 18 of The Ultimate Fighter, which featured female fighters for the first time and coincidentally was coached by Rousey and Miesha Tate. Unfortunately, Evinger came up short against Raquel Pennington in her preliminary fight.

There seems to be no love lost for the UFC on Evinger’s part, though, since she believes the organization primarily cares about Rousey at the expense of other fighters. There might be some truth to this, since the presumed No. 1 contender, the aforementioned Tate, was passed over for Holm, with only flimsy excuses from UFC President Dana White about wanting to “save” Tate’s career.

Evinger also believes politics may be at play for why she’s not currently competing in the UFC. She previously told MMA Junkie that UFC matchmaker Sean Shelby told her she was “unimpressive” and “doesn’t finish fights.”

As much as MMA fans want to pretend their sport shouldn’t be lumped with professional wrestling, they both fall under the same “sports entertainment” umbrella — sorry, but it’s true — so, like pro wrestling, MMA is not immune to backstage politics. That logic might explain, albeit poorly, why Tate, whose last four wins came by decision, was passed over for another shot at Rousey.

Evinger doesn’t appear to be in any hurry to jump through hoops to join the UFC, which is too bad. In addition to being a relentless competitor, Evinger is not afraid to speak her mind. In a division where the only real outspoken competitor is Rousey, another fighter who isn’t willing to just speak in platitudes could be a shot in the arm for what’s quickly becoming a flagging division lorded over by a dominant champion.