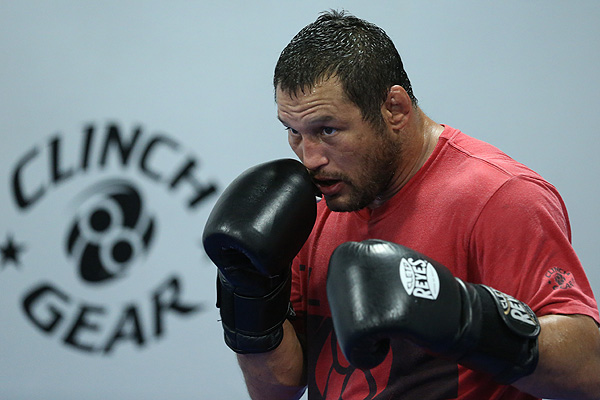 On the heels of announcing UFC on Fox 14 in Stockholm, Sweden on Jan. 24, which will be headlined by Alexander Gustafsson vs. Anthony Johnson for the No.1 contender spot in the 205-pound division, the UFC has also announced that Dan Henderson will take on Gegard Mousasi at 185 pounds in the co-main event.

The match-up was verbally agreed to on Wednesday morning.

Henderson will be making his first trip to 185 pounds since losing a Strikeforce title bout to Jake Shields in April of 2010. In Henderson’s last outing, he was dismantled by current light heavyweight No. 1 contender Daniel Cormier, losing by rear-naked choke. Henderson is 1-4 in his last five fights, with the lone win coming by way of TKO over Mauricio “Shogun” Rua at UFC Fight Night 38 in March of this year.

Mousasi will be fighting in front of a European crowd for the first time since defeating Mark Munoz at UFC Fight Night 41 in Berlin, Germany in May. Mousasi last stepped in the UFC Octagon in September to face streaking jiu-jitsu specialist Ronaldo “Jacare” Souza at UFC Fight Night 50. That night Mousasi was submitted, in a very exciting match-up, by guillotine choke in the third round. Mousasi is 3-2 in his last five fights, with alternating wins and loses in his last four appearance in the Octagon.

UFC on Fox 14 will take place from the Tele 2 Arena in Stockholm. The main card will air live on Fox at 8 p.m. ET, with the preliminary card broadcasting on Fox Sports 1 at 5 p.m. ET.