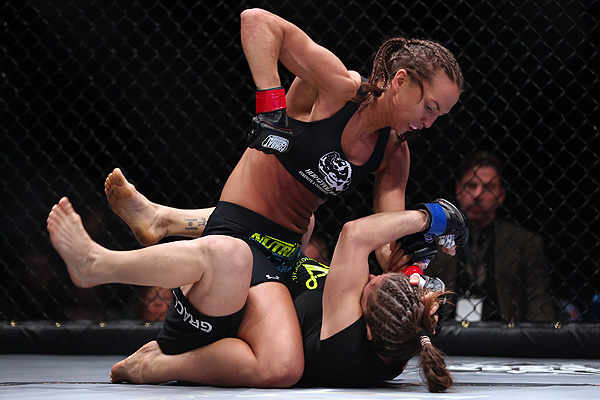 A bantamweight contest between Belgium’s Cindy Dandois and veteran Kaitlin Young is off the Invicta FC 9 card on Nov. 1 in Iowa as visa issues for Dandois forced the 29-year-old off the card at the last minute.

Young, however, will remain on the card. She will face off with Hawaii’s Raquel Pa’aluhi in a featherweight contest.

For Young, the fight marks her first fight since last April at Invicta FC 5. The longtime veteran has yet to earn a victory inside the Invicta cage, but has faced a gauntlet of opponents who are all currently in the UFC. Young fought Leslie Smith to a draw in her promotional debut, succumbed to a rear-naked choke against former UFC title challenger Liz Carmouche, suffered a TKO defeat in a rematch with Smith, and went the distance with former Invicta title holder Lauren Murphy in her last outing.

Pa’aluhi will make her return to the Invicta cage for the first time since the promotion’s second event in 2012. The Hawaiian was last in action in August, scoring a first-round TKO over Priscilla White.

Invicta FC 9 takes place from the RiverCenter in Davenport, Iowa. The event will stream live via the UFC’s digital network, UFC Fight Pass. In the night’s main event, Invicta flyweight champion Barb Honchak will make the second defense of her 125-pound title as she squares off with Japan’s Takayo Hashi. The night’s co-main event will feature the Invicta return of Japanese strawweight Mizuki Inoue, who welcomes unbeaten Polish fighter Karolina Kowalkiewicz to the Invicta cage.