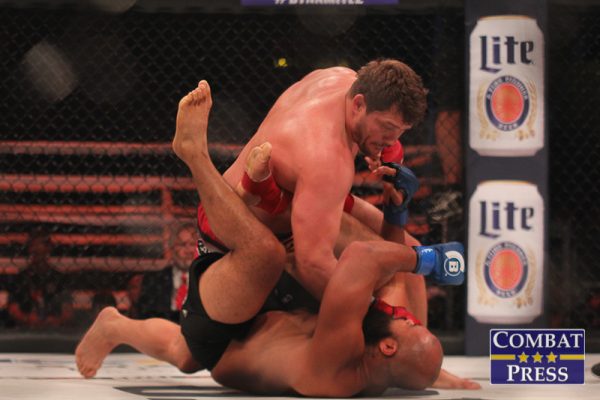 The first of two events for Bellator MMA on the weekend heads to the Mohegan Sun Arena in Uncasville, Conn.

The co-headliner also takes place in the heavyweight division, but it’s a non-tournament bout. The aforementioned Nelson, in an attempt to rebound from his loss to Mitrione, meets Sergei Kharitonov. Kharitonov is also on the hunt to return to the win column after his fight against Anton Vyazigin was declared a no-contest.

Now that Bellator light heavyweight champion Ryan Bader is finally meeting a full-fledged heavyweight opponent, Matt Mitrione, in the semifinals of the heavyweight tournament, can he still emerge with a win?

Mitrione and Bader are top picks to win this tournament. It’s a shame they have to meet this early, as it takes out a big chunk of talent from the tournament before we even get to the finals.

Bader can most certainly emerge victorious in this fight. He has shown time and time again that he is one of the best fighters on the Bellator roster and in the light heavyweight division in general. Granted, this contest takes place at heavyweight, but Bader’s wrestling is still something to hold in high regard. Mitrione will be a tough test for Bader, but the current Bellator light heavyweight champion took on Muhammed “King Mo” Lawal in the first part of this tournament and quickly knocked him out in the first round. Lawal has been great at heavyweight despite being smaller than most of his opponents. If Bader’s fight with Lawal is any indication, then the UFC veteran should succeed mightily.

Mitrione has been a great pickup for Bellator. He has added depth to the heavyweight division, which is something Bellator has struggled with for the entire existence of the promotion. Four fights in with Bellator, Mitrione has three knockouts and a perfect promotional record. This includes a victory over Fedor Emelianenko.

This fight should go the distance. Mitrione was able to withstand bombs from Roy Nelson over three rounds in the quarterfinals. Bader has power, but not at the same level as Nelson. Bader has a lot of avenues to win this fight, however, and his wrestling helps to extend his chances in the later rounds. Bader will indeed emerge with the victory.

Roy Nelson and Sergei Kharitonov meet in the co-headliner. How does this one end?

It should end in a knockout, and it just depends on which fighter is able to hit the button first. Nelson has a lot of power in his overhand right, but this is the entirety of Nelson’s game lately. He just wings the overhand right and hope it lands. Even with his jiu-jitsu background, Nelson relies heavily on just the one shot.

Kharitonov has a kickboxing background that gives him the edge in this fight. His striking is much more diverse than that of his opponent. However, he hasn’t really faced anyone tough in a very long time. Kharitonov last fought in Bellator over a year ago in a two-fight stint. During that time, he went 1-1. The loss came against Javy Ayala, who was able to land a huge knockout shot in under 20 seconds. This doesn’t bode well against someone like Nelson, who not only has knockout power, but also a chin that can take abuse. Nelson’s chin has deteriorated a little in the past few years, but it’s still able to absorb an immense amount of punishment.

This is a toss-up fight, but Nelson’s knockout power is a difference-maker, especially with Kharitonov’s loss to Ayala still fresh in our memory.

Let’s give this fight some recognition as an alternate bout for Bellator’s other tournament, which takes place in the welterweight division. Larkin left the UFC and became a big acquisition for Bellator. He went on to lose his next two fights to Paul Daley and Douglas Lima. Larkin finally got his first win in Bellator against Fernando Gonzalez by unanimous decision. Meanwhile, Pascu is coming back to Bellator after a win under the BAMMA banner against Alex Lahore.