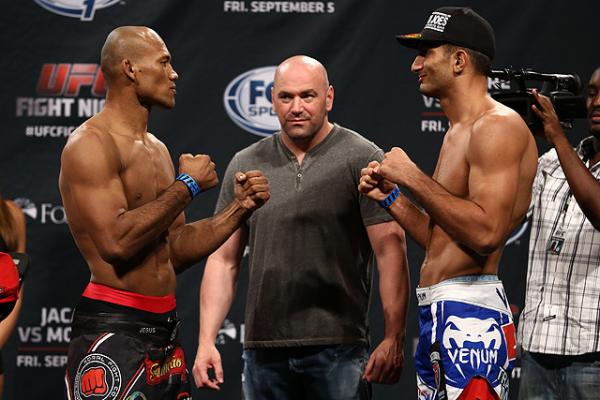 Uncertain Priorities: Is the UFC Putting the Wrong Fights on Pay-Per-View?

It doesn’t take much to draw the ire of Dana White. The UFC president is famous for lashing out at critics, and whether that critic is an actual media member or even a particularly vocal fan on Twitter doesn’t seem to matter most of the time. White will defend his company until he’s blue in the face, and the more offensive he finds the topic, the more vocal he’s going to be when tearing it down.

So when I heard the UFC president and current king of hyperbole call an article by Bleacher Report’s Jonathan Snowden “the most disgusting, fucking despicable thing I’ve ever seen” on an episode of UFC Embedded last week, I chalked it up to Dana being Dana. There have been dozens of times when White has taken a media outlet to task over the past decade, and it seemed like another routine defense of his product by White.

The article itself didn’t really present any problems fight fans haven’t been talking about for over a year now—pay-per-view buys have gone down, there are half as many stars as there used to be, too many fight cards are spreading talent thin and so on. The cry to rally the troops and boycott the UFC 177 pay-per-view last weekend was likely the only reason White was riled up about it at all. However, the main point of Snowden’s argument was the fact that current UFC pay-per-views don’t really feel like “events” anymore, and for the most part, Snowden’s right.

There hasn’t been a pay-per-view card in 2014 that has stuck out as a can’t-miss event. Sure, there have been can’t-miss headliners, and a few cards have been filled out with another bout or two worth paying for, but the days of a casual fan being able to recognize most of the fighters on a pay-per-view main card? Those days are gone.

UFC 175, the biggest card of 2014, had a blockbuster main event and Ronda Rousey in the co-headlining spot, but the rest of the lineup left more than just a little to be desired. This has been the trend for the past few years now, and as the UFC continues to amp up its schedule and add more free cards every year, the pay-per-views that were once the company’s bread and butter have struggled as a result.

Still, there are also more than enough good fights to go around and the typical pay-per-view shouldn’t look like a regular fight night, with the only difference being the gold belt wrapped around the winner’s waist at the end of the night.

It’s obvious the UFC still is content to live and die by its monthly pay-per-view schedule, as Snowden pointed out. But in order to survive, the company is going to have to start making changes to the rest of its live events. The UFC Fight Night 50 card tonight, less than a week apart from the criticized UFC 177 event, has a far better lineup on paper than its predecessor last week. That shouldn’t be happening. While fight fans were forced to dish out roughly $55 to watch relative unknowns Yancy Medeiros and Damon Jackson go head-to-head last weekend, this week they’ll get to watch two dangerous and capable UFC veterans—not to mention top-15 featherweights—Nik Lentz and Charles Oliveira duke it out on the prelims Friday. Alistair Overeem, who beat the biggest draw in UFC history less than two years ago, will somehow end up fighting on a random Fight Night in Connecticut in the co-main event instead of taking the same spot in Sacramento, Calif., a week earlier.

Guys like Overeem shouldn’t be fighting on free television—or worse, UFC Fight Pass—without at least sitting in the headlining spot. It’s a complete misuse of resources. Over the past year, we’ve seen guys like Clay Guida, Tyron Woodley, Diego Sanchez and Ronaldo “Jacare” Souza fight in co-main event slots on free television, and all of those fighters could at least have added some hype to a pay-per-view event that took place within two weeks of their scheduled fight. It seems ridiculously simple, but the solution is that the UFC needs to make fans pay for the fighters they want to see.

As a Nebraska native, I went to the UFC on Fuel card in Omaha in 2012. The place was wild and nearly packed. Yet, outside of the headlining fighters and possibly Stefan Struve, odds are that 90 percent of the people in the building couldn’t name another soul on the lineup. In smaller markets like the ones where the UFC likes to hold its Fight Night events, the fans are so desperate for a good fight card that they’re pretty much willing to pay for anything. Just give them a name they recognize and a ticket that says “UFC,” and they’re happy.

There’s no reason that the UFC couldn’t have scheduled Overeem’s fight with Ben Rothwell to the Sacramento card last week and used the open co-headlining spot in Connecticut to push highly touted flyweight prospects John Moraga and Justin Scoggins, who are dwindling away on the prelims. One of the main criticisms against the UFC over the past few years has been its inability to grow new stars, yet the company is burying a young, top-10 flyweight on the prelims in order to get the smallest of publicity rubs by using Overeem in a co-main event.

Obviously, the UFC needs to keep some star power on its free shows. For one, the company’s deal with Fox will sour a bit if the company starts producing lackluster television cards, and it’s likely Fox has a stipulation in the deal guaranteeing some level of star power the network can at least use to advertise the free shows. On top of that, the UFC still has to sell tickets at every arena it ventures to, and watered down events aren’t going to make that easy. But something is going to have to change, and if leaving a couple of thousand tickets unsold in Montana is going to earn the UFC another 100,000 pay-per-view buys a week later, then it’s a sacrifice the promotion may need to make.

The company has spent years building the brand instead of the fighters, and for a long time it’s worked. Now, however, the brand alone isn’t doing enough to earn pay-per-view buys. It’s time for the UFC to rely on its established fighters to get back on track.

Outside of a main event to keep Fox happy and get the local market talking, free cards need to firmly take a back seat at this point. That means the UFC needs to let the brand that it built into a juggernaut not only hold down the fort on free television, but also help develop new stars the promotion can push into the UFC spotlight to a much bigger free television audience. It needs to save its biggest stars for the pay-per-views, making those shows feel like the “events” they once were, while using its deal with the Fox networks to nurture and promote a new generation of stars.