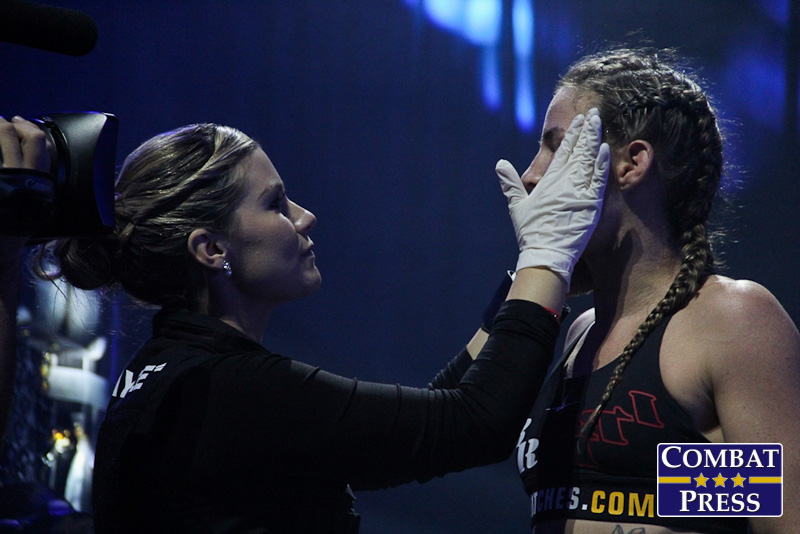 There is no wound UFC cutwoman Swayze Valentine has ever had to repair as deep as the gash in her own heart.

Bumps, bruises, scrapes, cuts, head trauma and so many other painful images come to mind when you think about combat sports. It’s a brutal athletic competition at times, and it’s easy to empathize when seeing a human in agony. Whether you stubbed your toe, broke your arm, accidentally sliced your finger when julienning vegetables or you’re an MMA fighter, we understand pain when we see it. There are some pains, though, that we can’t see and not everyone can relate to or even fathom.

Before pioneering as one of the few females strapped with enswell and taping fighters’ fists, Valentine was a stay-at-home mom. Having kids obligated her to grow up, but what pushed her to be a successful career woman was initiated by the biggest challenge in her life.

Out of anger, Valentine’s ex-husband took their children and bailed on the state in which they resided. His plan was to remove all of her rights to her kids, which resulted in months of court battles. Valentine wasn’t prepared for the litigation process. Her ex-husband had taken all her money, froze all accounts and took her vehicle. However, none of that compared to the conniving stunt he pulled to capture her two sons.

“It was the first time I was away from my kids for three days in their entire life,” Valentine told Jason Kelly and Joe Rizzo on Rear-Naked Choke Radio. “I was in Vegas, working my first amateur show. I’m flying back and he’s supposed to meet me there with my kids. I land and I get this text message saying I’m not going to see my kids again until the divorce is final and they figure out who they’re going to go to.

“I just collapsed right there in the airport, and I had to fight from that day forward. MMA was the only thing that I had that pulled me through, because it was the only thing I enjoyed in life. I didn’t have my kids for several months while I was fighting this custody battle. I lived in Washington at the time; he was in Idaho. So it was a 10-hour drive. I would drive every single week to go see my kids and go to court. I pawned everything I owned for gas money and attorney fees, and it was just horrible.

“On the side, I’m going to gyms to wrap people’s hands and going to Vegas and working shows all for free just to [make it]. I’ve donated blood so many times for gas or for food to eat while I was in Vegas. There were times I arrived in Vegas with literally a dollar in my pocket. It was the most challenging time of my life, yet so rewarding at the same time because I got to do my passion, and I don’t think I ever would’ve done it if that situation never happened. I would’ve never had that drive, that push, to go do what I needed to do because I didn’t have my children. Long story short, I got full custody and that’s how it should’ve been in the beginning.”

Already having an interest in combat sports, and being that MMA was her crutch after collapsing in the airport, Valentine immersed herself in what was going to be her career.

Valentine began learning the craft of the cutman in 2008, following her one and only experience as a ring girl. In a wise move, she sought the advice Jacob “Stitch” Duran possessed. She had no experience in the field and was aware the grind would not be simple. However, motherhood, especially that of being a single mother, challenged her in so many amazing ways. She was determined to make something out of nothing.

Valentine, who grew up in Alaska, wasn’t used to the amenities of city life. Her family lived in the woods, including an 18-month stint of residing in a motor home while they built a cabin. No running water. No electricity. Chopping wood. Cruising the trails on a four-wheeler with her brother. These were all significant parts of Valentine’s youth. Heat was not an option, so the family would toss bricks in the wood-burning fire place, then take them out, wrap them in towels and put them at the foot of their beds to stay warm at night. And in a less-than-popular area of Alaska, Valentine didn’t attend a high school with thousands of students, so making friends wasn’t an easy chore. Heck, she was homeschooling herself by grade 10.

Don’t get it twisted. Valentine is into paying the utility bills these days, but she doesn’t come from an upbringing of effortless luxuries. Working hard for needs, not wants, is second nature to this polarizing woman.

The MMA industry offers minimal avenues to make a good buck. Often, fighters in the biggest promotions need a second job to make ends meet. Outside of the cage, it’s even more difficult to secure an occupation that provides financial stability. Valentine, going against the grain as usual, found a way to make it work.

“You can definitely make a living off MMA and Muay Thai. It’s just that boxing has more funds to shuttle around,” Valentine said. “As long as you’re staying busy with shows, you absolutely can make a living off of it. It’s a matter of how many shows you’re willing to work and how much you’re willing to travel. I mean, MMA, especially with the UFC, they have so many shows, and that’s just awesome. If you pick up Muay Thai on your off days, shoot, you can absolutely make a living.”

Valentine is not only making a living, but also creating a life for herself. Content with where she is, she reflects on the most difficult time she endured and cherishes the strides she made to get where she is today. She will never forget what stood by her side while she fought.

“I could’ve turned to drugs or alcohol to deal with it, but I chose MMA,” Valentine said. “That was the only thing that got me through that while I was fighting for my children to get them back. MMA was the only thing that kept me sane in the times I didn’t have them and couldn’t be with them while we were going to court. This industry is really special to me.”