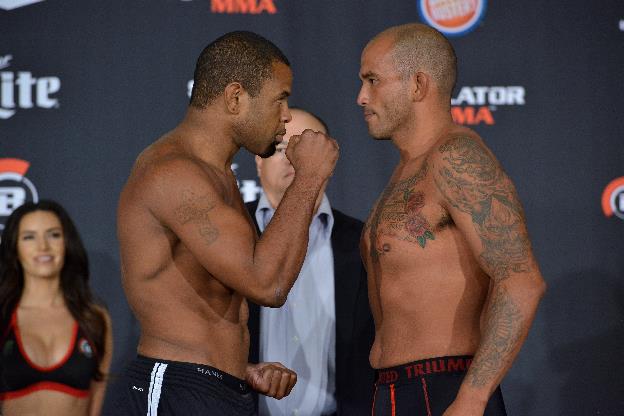 On Thursday, Sept. 11, Bellator MMA hosted the weigh-ins for its 124th event which takes place Friday, Sept. 12 from the Compuware Arena in Plymouth, Mich.

In the night’s main event, the promotion’s light heavyweight title will be on the line as champion Emanuel Newton faces off with UFC veteran Joey Beltran. Newton will look to make the first defense of his unified 205-pound belt, having exacted revenge from former champion Attila Vegh in his most recent outing. The 30-year-old Californian also holds a pair of wins over former Strikeforce champion Muhammed “King Mo” Lawal during his current streak. Beltran, meanwhile, picked up his first win in the last two years by submitting Vladimir Matyushenko at Bellator 116 in April.

The main card also features the completion of the promotion’s light heavyweight tournament as unbeaten Liam McGreary faces off with Kelly Anundson. England’s McGreary enters the contest having finished all five of his Bellator appearances in the first round. Nevada’s Anundson rides a six-fight winning streak of his own into the bout.

*Bagnasco was given two hours to reach the lightweight limit