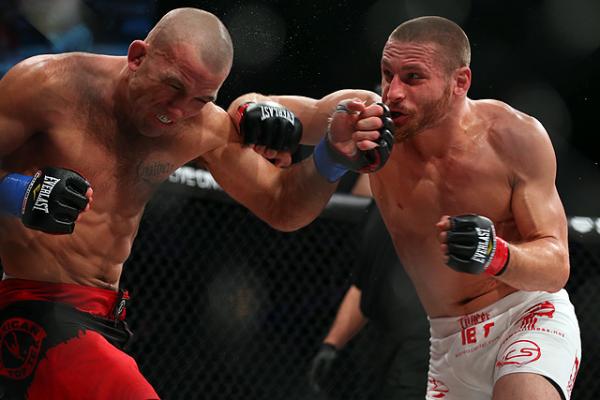 It isn’t the biggest of leagues, but Summit FC delivers a big headliner during this holiday season for its 25th event, which also celebrates the fourth anniversary of the promotion. The featured bout is a middleweight title tilt between Grady Hurley and Andy Uhrich.

Hurley has an odd resume, but there’s an explanation for that. Hurley debuted as a pro in 2001 and posted a 6-1 mark before going on a 12-year hiatus. He returned to the sport in 2014 and strung together eight straight victories while making appearances in Summit FC as well as Legacy Fighting Championship, V3Fights and Bellator MMA. Then, he stumbled in his first appearance for the Legacy Fighting Alliance. That bout, his most recent outing, ended in a first-round TKO loss to Kevin Holland. The fighter named “Sue” is in his late thirties. He has scored four submission victories and six knockouts.

Uhrich hasn’t been around quite as long as Hurley, but he did debut in 2007. The 32-year-old eventually landed a spot on Bellator MMA’s reality show Fight Master, where he defeated Dom O’Grady but couldn’t continue in the competition because of a deep cut sustained in the fight. Uhrich, who had a successful one-fight stint with Strikeforce, went on to compile a 1-2 mark in official Bellator action around the same time as he appeared on the reality series. His losses in this stretch came to Nathan Coy and Ben Brewer. After picking up a couple of wins under the Summit banner, Uhrich took a split decision over Bobby Cooper in a Titan FC 33 prelim bout and then lost via knockout in just two minutes to Paul Daley in the Bellator 148 headliner in early 2016. This will be his first fight since the loss to Daley. He has four knockout finishes and two submission wins.

Uhrich is a solid veteran, but he’s not one who typically comes out on top against quality opponents. He lost his pro debut to a middling Chris Gates, fell to future UFC fighter Jake Hecht, dropped a fight to future The Ultimate Fighter 13 competitor Charlie Rader and eventually suffered his additional losses to Coy, Brewer and Daley. Brewer happens to have been submitted by Hurley, but he was able to score the big knockout finish against Uhrich.

Hurley’s getting up there in years and had an unfortunate near brush with death when he was in a head-on collision early in his fighting career. Now the owner of his own gym, Hurley does seem to be back on track, but he has to make the most of what time he has left. This match-up with Uhrich is another chance for Hurley to prove his legitimacy in the middleweight division. He’s already flirted with the big show, but his loss to Holland was a major setback.

Uhrich is capable of landing a big blow that can test Hurley’s chin, but he’s not exactly in possession of an iron chin of his own. This one’s a tough pick, but Uhrich has faced a lot more quality competition and could use his experience to take the upper hand. This one’s likely to go the distance, and it’ll be Uhrich’s hand that’s raised in the end.

Colosseum Combat has one homegrown talent that could make waves in the welterweight division. That man is the league’s champion, Aaron Highbaugh. The undefeated prospect will put his belt on the line at the promotion’s 42nd event when he meets Cameron VanCamp.

Highbaugh took his time getting to the professional level. He debuted as an amateur in 2013 and accumulated a 15-fight resume that included 11 wins, 10 stoppages and only four losses, including one submission defeat. Three years later, he entered the pro ranks and scored his first three wins by decision. His next two fights ended in first-round knockouts. Most recently, the 32-year-old submitted The Ultimate Fighter 12 contestant Daniel Head.

Despite four losses on his record, VanCamp actually checks in one spot ahead of Highbaugh in the rankings of welterweights in the Indiana regional circuit. The 24-year-old also had a lengthy ammy career that ended in a 9-3 mark with six submission wins and two stoppage losses. He turned pro in 2014 and maintained a busy schedule. After fighting to a draw in his debut outing, VanCamp picked up two straight wins and then lost back-to-back fights. He’s gone 7-2 over his last nine fights, which have spanned across three divisions, from featherweight on up to welterweight. Most recently, VanCamp snagged the vacant Hardrock MMA welterweight strap with a first-round submission of Quinton Parks Jr. Overall, VanCamp has five submissions and three knockout victories at the professional level.

Highbaugh has only faced two men who sit above the .500 mark as pros. One of those men, the aforementioned Head, was only one fight above water when the pair met, but the victory still counts as Highbaugh’s most impressive showing. His other key win was a first-round knockout of the previously unbeaten Ricky Miller. Meanwhile, VanCamp is coming off a win over the previously undefeated Parks Jr., and he has faced more seasoned opposition on a regular basis, scoring wins over the likes of Damian Norris, Reggie Merriweather, Joseph Blaze and Bryant Whitaker.

Highbaugh has the flashy record, but let’s not forget that he suffered some losses as an amateur. He’s not quite as invincible as he might seem, and VanCamp has a strong grappling base that could threaten to put the first blemish on Highbaugh’s record. “Uncaged” has been good at avoiding the submission ever since his only stoppage loss as an amateur just three fights into his MMA career, but he has still fallen on the scorecards. VanCamp has the opportunity to hand Highbaugh a submission defeat, but it’s more likely that the 24-year-old will have to settle for the judges’ nod in this one.

It’s not looking good for Deep Jewels these days. The promotion that once served as a home to a number of top female fighters now hosts cards that often feature only a handful of veteran competitors of true merit. The same goes for the organization’s 18th outing, which includes one amateur fight, a grappling bout featuring Mika Nagano and a total of 16 fighters with less than five pro fights. Only Yurika Nakakura, Yuko Kiryu, Satomi Takano and Tomo Maesawa have more extensive experience among the ladies competing in MMA matches this weekend under the Jewels banner. Of course, the showdown between Takano and Maesawa holds the most significance for women’s MMA fans.

With the lack of depth at atomweight, both of these ladies continue to dance just outside of the top 15 or 20 in the division despite their mediocre win-loss totals. The 27-year-old Takano has been a Jewels regular since the promotion’s pre-Deep days. The same holds true for the 29-year-old Maesawa, who debuted with Jewels in 2012.

Takano, a catch wrestler and judoka, was the first of these ladies to enter the pro ranks. She kicked things off with two victories before going just 1-5 over her next six fights. However, Takano’s rocky road included losses to veterans Yasuko Tamada and Masako Yoshida and elite atomweights Naho Sugiyama, Saori Ishioka and Mina Kurobe. “Sarami” then went on a three-fight winning streak in which she avenged the loss to Yoshida and picked up a two-round decision win over her current opponent, Maesawa. She lost three of her next four, but again the losses came against quality opposition in the form of Mei Yamaguchi, Emi Tomimatsu and Tessa Simpson. Once more, Takano rebounded with a three-fight winning streak that culminated in a knockout finish of Maesawa in May. In her most recent outing, Takano dropped a split verdict to the aforementioned Tomimatsu.

Maesawa was thrown into the deep waters immediately upon making her pro debut. She lost her first three fights to the aforementioned Nagano, Kikuyo Ishikawa and Kurobe, respectively. She won five of her next six, but was the victim of a 39-second finish at the hands of current UFC fighter Cortney Casey. Then, she suffered her first loss to Takano. She rebounded with a win over Karei Date and then took a loss against Kurobe before beating Tomimatsu by submission. After her second loss to Takano, Maesawa has gone on to claim back-to-back victories over middling competition.

Just the recap of their lengthy careers is enough to peg these two ladies as inconsistent fighters. However, it’s also enough to demonstrate that Takano seemingly has Maesawa’s number. Their first fight went the distance, but Takano won their (very recent) second bout in more convincing fashion. It’s likely that this third fight will be more of the same. Takano should put Maesawa away via strikes to sweep this trilogy.