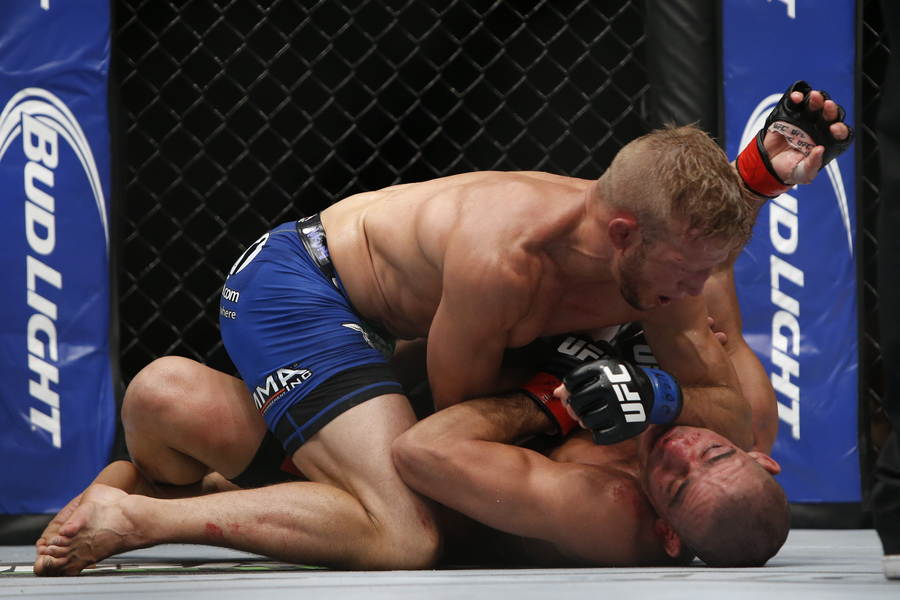 Who does not like a violent, vicious rivalry within the UFC? These Rivalries are what keep the sport going and keep us inspired to stay invested in what we are watching!

We all love the UFC, and we can agree that the UFC has some of the best rivalries of any sport out there, but picking the best one is hard. No matter how much you consider UFC odds and how many certain rivalries peak the odds, it is hard to tell.

We cannot say that the Dillashaw and Garbrandt rivalry is the best there has ever been, but we can say that it is one of the best, and most vicious rivalries we have ever seen in the UFC.

It is an ugly feud with personal history and a scandal as well as 2 championship fights! It is basically the perfect recipe. Is it the perfect rivalry? We cannot say, but it sure has all the right ingredients there to be!

In spite of having shortcomings as a UFC fighter, Ludwig managed to prove his knowledge of the fight game when he became the head coach of Team Alpha male.

He managed to establish himself as being one of the best coaches in MMA, and he managed to transform the team from a gym of boasting contenders into a super force in the UFC.

In early 2014, Faber fell to Renan. Team Alpha Male was on the ball, however, in spite of all the success and notoriety, they still didn’t bring the gold home. Their patriarch Barao was their greatest hope, but he still could not get the gold.

The following month, he met with Faber, planning to return home and establish his own gym, but Faber did not like this. He had told Faber he would complete training camps, but Faber instead went and told everyone about Ludwig leaving without the knowledge of the coach, and from them, the relationship was broken.

May 2014: Dillashaw Gets Revenge

Only a few months later, Dillashaw gained revenge for his mentor and destroyed Barao, then becoming the UFC bantamweight champ! He came in as an underdog, but ended up doing the unthinkable as he dominated Barao and captured the gold.

However, later as the Team Alpha Male stars disappeared from the spotlight, a new star emerged with Garbrant, as he made his debut at the UFC182 fight. He only had a few pro-MMA experience years, but he quickly earned a ‘statement’ win as he knocked out Brimage.

Later on we saw Dillashaw defending his crown against Barao once more, and he TKO’d his Brazilian rival in the 4th round, the performance showing that his hard win against Barao was no mistake.

In doing so, Dillashaw managed to do what Faber could not!

In the same month, the 22nd season saw McGregor and Faber as oppositional coaches, and although they didn’t cross paths in the Octagon, they did do plenty to highlight the deterioration in the relationship between Dillashaw and Faber.

After all the chaos, it was no real surprise when Dillashaw left Team Alpha Male. He was definitely at odds with Faber, but where would he go? Well, obviously he went to Ludwig and his Elevation Fight Team based in Colorado!

Things got even more sour from here.

Now that he had left behind all the drama and pettiness, Dillashaw seemed to have an awesome career lined up for him. But… then, the biggest villain in Team Alpha came back to haunt him… Dominick Cruz, who had a long history with Faber.

Cruz took back the bantamweight title against Dillashaw.

Garbrandt had an epic win in 2016 and this made things pretty hot, but Dillashaw made things even more interesting as he managed to climb his way back into the game. With a clash between these two former teammates becoming more likely by the minute, they started taking shots at one another.

It is claimed that Dillashaw even made Garbrandt cry, but Garbrandt says he knocked out Dillashaw when they sparred.

2017 saw the first clash. They came to blows at the UFC 217 fight, and Dillashaw finally had a place to let out all his anger, Team Alpha Male was finally going to pay all the trash talk.

After a very competitive first round, Garbrandt looked like he had the upper hand as Dillashaw went crashing down. But, in the second round he came back, and it ended in a stoppage.

A rematch in 2018 furthered the viciousness, until later on Dillashaw was banned for EPO.