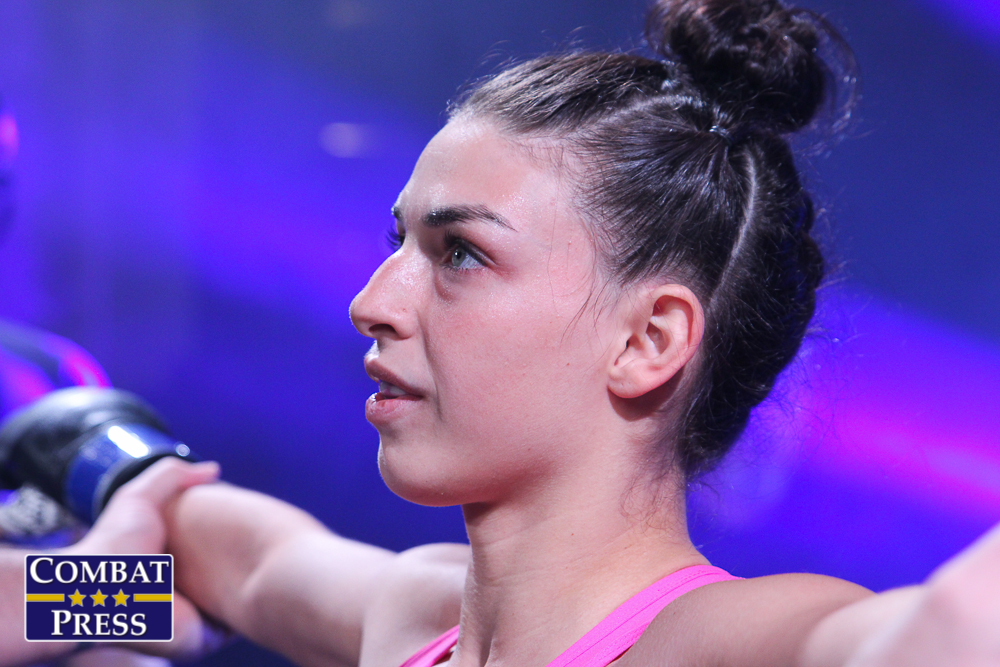 Before I get into the UFC card, I want to mention that Invicta FC returns tonight with a great card that will culminate in an atomweight title bout featuring Ashley Cummins and Alesha Zappitella.

As an Invicta athlete myself, I plan to mostly avoid talking much about the company and its fights. There will be potential bias there, whether real or perceived, if I talk about specific fights, so it is best to simply avoid it altogether. However, I did want to make a quick mention of it and let you know that you can see it live on UFC Fight Pass.

Now, let’s talk a little about this weekend’s UFC on ESPN+ 36: Covington vs. Woodley card. It includes three female bouts, each with their own significance.

Jessica is someone whose record does not do her justice. She is underrated. Her record stands at 9-6, but a deep dive into that mark reveals losses to people like Jessica Eye, Pannie Kianzad (twice), Pam Sorenson and Sarah Kaufman. She is on two-fight skid, having most recently lost a decision to Kianzad in November. She needs a win, and she knows that.

If you are a social-media follower of Jessica, you can clearly see she is more motivated than ever and is definitely working hard, both on her striking and her fitness. She seems to have added some muscle to her frame as well, which may be useful to her when her opponents try to push her against the cage. I am not expecting some kind of transformation — the whole “I am a totally different fighter” thing — but I am expecting a better version of her.

I don’t claim to know game plans and can only go on my own speculation, but I expect Jessica will rely on her striking in this one. She’ll try to keep it at her range — a lot of get in, land and get out. If it goes that way and Sarah looks to force the clinch, Jessica’s added strength may benefit her.

Sarah will have her first fight since winning her UFC contract on Dana White’s Contender Series over a year ago when she defeated Shanna Young. After winning just four of her first seven pro bouts, Sarah has since won five of six, including one that was incredibly impressive: a decision win over Joselyne Edwards at Legacy Fighting Alliance 55. We saw in the fight against Young that Alpar has heart. She can fall behind and still pull out wins. That could be important here, because I expect Jessica to try to start fast.

Sarah is capable of ending a fight with her hands or with a submission. That may sound weird, considering she has only two stoppages, but I guess you just have to trust me. She has those capabilities.

My guess is that she will want to get this fight on the ground. Maybe not right away, as she might be willing to stand with Jessica and feel her out, see how she feels, and see how the fight is going, but eventually I see her wanting to get it there.

There is always much made about a fighter’s UFC debut and the nerves and what not. While the no-fans-in-attendance thing seems weird still to fans, I wonder if, in the case of debuting fighters, it benefits them — no fans, no craziness, focus on the fight. Maybe that helps Sarah get into her groove faster. Sarah comes in as the underdog, and rightfully so. She has not fought the competition Jessica has faced, but I feel she is capable of getting a win.

This is a fight where the second round will tell us the story. Whoever takes the second round, has momentum, and feels better has the edge in the third and can take over from there.

Mayra comes into this one after tasting defeat for the first time in a March loss to Maryna Moroz. When you are a finisher and looking to bounce back, what kind of opponent do you want? One that has been finished in two of her last three fights.

Mayra’s previous fight, a win over Gillian Robertson, really set the stage for how good she can be. She submitted someone who herself is known for her ground and submission games.

None of us like to lose, but the saying goes that you sometimes learn more from a loss than a win, so let’s see what Mayra may have learned from her first defeat. In Mara, she faces someone I expect to come out fast and aggressive. Mara will try to push the action. It will be interesting to see whether Mayra immediately looks to come under the punches of Mara and take it down, or if she will be willing to test the waters on the feet and see how she does there.

Mara has her back to the wall here. She has lost three in a row and four of her six total UFC bouts. Most recently, she suffered a submission loss to Cortney Casey, but in many ways she beat herself in that one. She had Cortney in trouble early. She was on top and didn’t seem to recognize Cortney looking for the armbar till it was too late. With her back against the wall, we might see the very best version of Mara here. I expect she is going to come out of the gate super aggressive and look to swarm Mayra. The key for Mara is to be cautious while also being aggressive. She must keep herself out of bad spots and be willing to back out if needed. Leg kicks can be a huge weapon for Mara here, but she should end combos with them and don’t let them get caught to where she could be taken down off of them.

I absolutely love this fight. The submission specialist Mackenzie is up against the girl who has only been submitted once (excluding The Ultimate Fighter). Everyone wants to keep Mackenzie standing and not mess with her jiu-jitsu. While Mackenzie might not have the most traditional movement or style, she has power. When she hits you, you know you’ve been hit. She can use this to wear an opponent down or make them bring their hands up. This makes it easier for her to get the fight to the ground.

Jiu-Jitsu is my game. That’s what people expect when they see me fight. Early in my career, it was “let’s get them down right away.” As I have progressed, it has become “let’s stand with them and wait till the time is right to take them down.” You see that more and more with Mackenzie, too. As she becomes more and more confident in her hands, she is more willing to stand. To borrow and change from Patrick Swayze in Roadhouse, Mackenzie will “stand with them until it’s time not to stand with them.”

I think we will see this play out against Randa here. Mackenzie will stand and willingly trade strikes for a bit, maybe even the whole first round, before she looks to get Randa off her feet.

Randa comes in having dropped two of her last three bouts, but those two losses came to Amanda Ribas and Claudia Gadelha. There is no shame in that. Randa has some impressive wins on her resume, too. She has beaten Angela Hill, Juliana Lima and former titleholder Carla Esparza.

If Randa wants to make a title run, the time is now. She needs to start it here. A win over Mackenzie would be a good boost. Randa is confident everywhere, but she’s surely not going to be interested in grappling with Mackenzie any more than she has to. She’ll look to keep it up, not get caught in clinches, and keep a safe distance to where she can strike and land while not in any danger of getting taken down.

If Mackenzie is in fact willing to stand for the first round as I suspect, then that round might be Randa’s best chance at a win. That being said, if Randa can stuff the takedowns and draw the fight out, I like her to have the cardio edge. As it drags on, perhaps she can frustrate and tire Mackenzie. Randa comes in as the underdog here, but she is definitely a live dog, as they say, and has routes to a victory.

Thanks for reading and enjoy the fights this weekend!