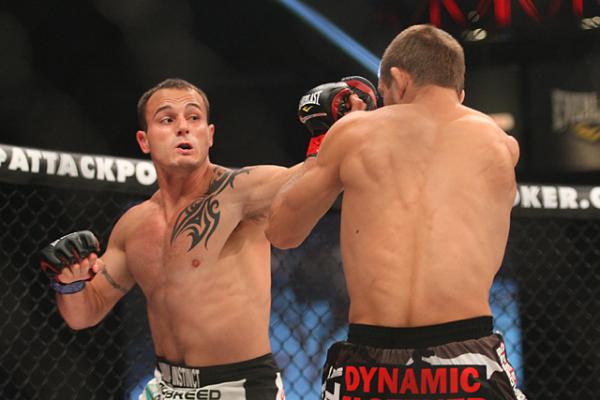 BKFC 21’s Dakota Cochrane: ‘Someone Will Get Finished’

Nothing is more of a bare-knuckle battle than starting a business. Much like bare-knuckle boxing, it is scary, fun, risky, challenging and can make or break the livelihood of a person and their family. That being said, with great risk can come great reward. And, for John Noojin and Dakota Cochrane, owners of Husker Deck and Patio in the Omaha, Neb. area, business is good.

“We are absolutely swamped,” Cochrane told Combat Press. “It’s really good. It’s going well. We are building a business [and] already selling for next year. We have some monster projects for next year. Fighting is kind of a hindrance on the business right now.”

Cochrane has been competing in combat sports for a long time. The powerlifter and formal personal trainer first competed in MMA in 2009, and by 2019, had compiled a 33-13 record. In late 2018, he dipped his toe into the bare-knuckle boxing arena and picked up a TKO win over former UFC welterweight champion Johny Hendricks. He now sits at 3-0 as a pro bare-knuckle boxer. But, with a business, a wife and three kids, plus a fighting career, life is busy.

“It’s really tough,” Cochrane admitted. “I lift weights in the morning, and then I work. Like, tonight, I worked until 7:30 p.m. And then, I drove to Omaha, and I trained with [UFC featherweight] Darrick [Minner]. I do a mixture at Premier [Combat Center] and at Minner’s place. Usually, he’ll come to my place or I will go to his place. We do a mixture of that with what works with both of our schedules.

“I’ve been to two of Darrick’s fights, so that’s been fun – going on trips to the UFC. That’s been cool. And, when I’m out there, I’ve gotten to train with [UFC veteran James] Krause a little bit, because Krause has been cornering Darrick.”

Bare-knuckle boxing seems like a crazy sport, but it’s quite pure and challenges a fighter to pay attention to what he’s doing. There is little room for error and throwing caution to the wind could turn out to be a big problem. Luckily, longtime training partners Minner and Cochrane are a great fit when getting ready for any type of combat – even the type that involves no hand protection.

“I definitely think it affects the outcome,” said Cochrane. “People get cut way easier. If you just throw and don’t care where you’re throwing, and you hit the top of the head, you break your hand. It changes the game. It’s a whole different sport. You have to really train on how you throw that overhand and where to throw it. That’s where hitting mitts with Darrick helps me a lot. He’s a student of the game [and] by far the best person to work with. He really tailors my game plan to the sport of bare knuckle.”

Tomorrow night, Bare Knuckle Fighting Championship will host it’s inaugural Nebraska card for the promotion’s 21st event. Cochrane will be headlining the event against Bellator vet Mike “The Marine” Richman in a 170-pound affair. It will be Cochrane’s first time fighting since last December, but not for a lack of trying.

“We’ve been trying to get it legalized in Nebraska for a long time – the last year basically – but, COVID kind of slowed everything down,” Cochrane said. “They’ve been planning to have me on a card, which is why I haven’t fought since November. The date has moved a couple times, but the plan has been for me to beat someone up in Omaha.”

In MMA, Richman was known as a striker, so it’s a great opponent for Cochrane who is known for having power in his hands. Richman first fought in bare-knuckle boxing back in Ken Shamrock’s Valor Bare Knuckle two years ago, which ended in a no-contest. He fought again at BKFC 17 in April, where he beat Marcel Stamps by TKO due to injury in the first round.

“I think it’s going to be a great fight,” Cochrane explained. “I’m going to explode, and he’s a pretty calm dude. He throws power shots. He’s got a good right hook and a straight left. I’m going to have to use my feet to stay away from getting hit with those hooks. I feel like it’s a really good match-up and I like going against Southpaws. He’s about the same height and has a very similar build. I think it should be a pretty crazy fight.

“I’m not really a super mover. When I come forward, I explode. I try to be quick and powerful, and I’m not going to try to dance around him. When I come in, I come in hard.”

Undefeated in three fights, Cochrane has found a home in bare-knuckle boxing. It’s not quite as technical as traditional boxing. However, it’s arguably more dangerous than an MMA fight, where a fighter can pull the wet-blanket wrestling technique and just grind out a win with little damage to either opponent.

“This type of boxing is made for me,” Cochrane said. “You’ve got to be tough. You’ve got to be willing to get hit, and wiling to deliver some heavy blows. I really feel this is a great sport for me. It’s quick. It’s fast. I’ve said before that MMA guys do well, because it’s tough.”

Cochrane is looking forward to his upcoming battle in front of the hometown crowd, and, outside of fighting, his business is booming. However, there is the other aspect of his life that is also keeping him and his wife busy – their three kids.

“Ace is in football right now, so he’s pretty much just focused on football,” Cochrane said. “My youngest, Axel, is going to start flag football soon. We’re pretty excited for that.

“Ava’s in the beginning stages of barrel racing. She just had her first official [event], and she got third place in her division, so that was cool. She won like 16 bucks, and she was pretty happy about that.”

It’s well documented that Cochrane is a busy guy, but this is the environment he thrives in. Tomorrow night, he will have a chance to put on a great show as he faces a tough opponent on his home turf, and he could not be more excited.

“I expect it’s going to be a really, really tough fight,” Cochrane predicted. “We’ll see if someone can go five rounds, but I think someone will get finished in the fourth.”