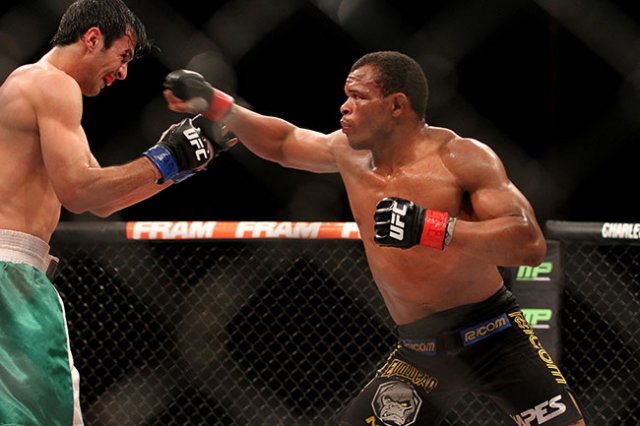 The headliner of UFC Fight Night: Rozenstruik vs. Sakai features a pair of hard-hitting heavyweights in Jairzinho Rozenstruik and Augusto Sakai, but it’s not the only fight that should provide a high level of entertainment on Saturday night. Another match-up of strikers takes place on the undercard, where Francisco Trinaldo meets Muslim Salikhov. At different stages of their respective careers, these fighters are riding winning streaks and will look to impress again this weekend.

Trinaldo has been with the UFC since 2012. A perennial challenger, he has 15 wins inside the Octagon. The Brazilian has finishes over Paul Felder and Evan Dunham, as well as unanimous-decision victories over Yancy Medeiros and Jim Miller.

Trinaldo is currently in the midst of a three-fight winning-streak that dates back to 2019. In this stretch, he has beaten Bobby Green and John Makdessi by decision, while also finishing the debuting Jai Herbert. After losing the first two rounds against Herbert and even being dropped in the second, Trinaldo unleashed a lethal overhand that stunned the Brit and put him on the floor. Despite the dispute between commentator Dan Hardy and referee Herb Dean overshadowing the finish, Trinaldo showed tremendous heart to come back and finish a rising prospect.

Salikhov, Trinaldo’s upcoming opponent, lost his UFC debut in 2017, but he has since been perfect in the promotion. Formerly plying his trade in Asian organizations, Salikhov has wins in M-1 and Kunlun Fight. He entered the UFC off the back of a knockout victory over Melvin Guillard.

Salikhov now rides a four-fight winning streak that includes knockout victories over Nordine Taleb and Rick Rainey. The “King of Kung Fu” was most recently in action nearly a year ago when he scored a decision victory over Elizeu Zaleski dos Santos. He landed the heavier shots, particularly a stiff jab, throughout the contest, as well as kicks to both the leg and body. With the win, Salikhov put the division on notice.

At age 42 and with 33 fights to his name, Trinaldo is a man for whom time seems to be no issue. He has been able to compete far longer than some of his counterparts, especially with his gritty striking style. The betting line rightly favors Salikhov, but Trinaldo’s heart and experience might serve to his advantage in this match-up.

Both Trinaldo and Salikhov will look to take a huge scalp here. Whilst Trinaldo’s name holds more casual value, Salikhov will be a tough test for anyone at 170 pounds. Moreover, with Trinaldo moving to welterweight for the first time since 2012, it will be interesting to see if his power and strength still holds up at a heavier weight. These storylines combine to make this fight one to watch.