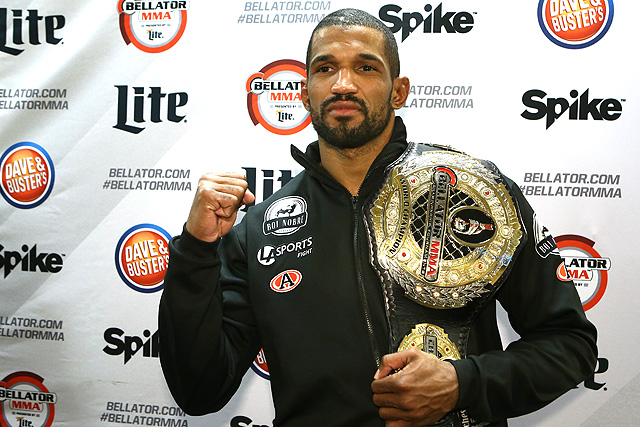 Bellator MMA heads to Florence, Italy, for the first of two events in Europe in the month of December.

The headliner features Alessio Sakara fighting on home soil and trying to take the Bellator middleweight belt from champion Rafael Carvalho. Sakara last fought one year ago, and his victory over Joey Beltran pushed him into a three-fight winning streak and prime position for a title shot. This will be the second time this year that Carvalho defends his middleweight crown in front of the Italian crowd. Carvalho fought on Bellator’s last trip to Italy in April when he beat Melvin Manhoef via fourth-round knockout.

In the co-main event, veteran Brandon Girtz attempts to halt his current three-fight skid against Luka Jelčić. Bellator also heads to the women’s flyweight division, where Lena Ovchynnikova takes on Maria Mejia. Lightweights Mihail Nica and Carlos Leal Miranda round out the bill.

The Bellator 190 card, which will be paired with a Bellator Kickboxing event, airs on Spike TV on Saturday at 9 p.m. ET.

Does Alessio Sakara belong in a Bellator middleweight title fight? Does he have anything beyond a puncher’s chance at unseating Rafael Carvalho?

No. Nope. No way. Was Rory MacDonald not available? Heck, instead of throwing Chael Sonnen, who hasn’t looked any good at anything but middleweight, into a heavyweight tournament, why not use him here? That would probably be a better option.

The big reason this is happening, though, is because this card takes place in Italy. Bellator needs an Italian in the main event, and what bigger name is there in Italian MMA than Sakara? He’s one of only a few Italians to fight in the UFC. Even fewer have had the limited success Sakara had inside the Octagon. That’s why we get this headlining match-up. It’s for no other reason than to bring in a hometown favorite. The Italian crowd isn’t coming for Carvalho, but for the Italian fighting for the middleweight belt.

Sakara isn’t completely unworthy of the spot, however. He has won his last three fights since leaving the UFC. This includes his only two appearances in Bellator. Yet, those fights are from last year. By the time this title fight actually happens, it will have been 364 days since Sakara last fought. That is a ridiculous layoff for a guy who’s fighting for a title. Again, was MacDonald not available?

MacDonald has thrown his name into the ring to compete in the middleweight division. While Bellator is giving these guys some great deals to leave the UFC, maybe the company isn’t the bottomless pit of money we think of when we picture the owners, Viacom. Sure, these fighters get nice checks, but they only get a check when they fight. MacDonald is simply too expensive for Bellator to put on a card more than twice a year, and so these title defenses for Bellator champions come against aging veterans of the sport instead.

If Sakara can’t make this a brawl and land some bombs, then this is going to be either the longest fight of his career or the shortest. Either way, it won’t be much fun for him. If he wins, he would become one of the first Italians to hold a belt in a major promotion. However, a puncher’s chance is about all the hope he has.

This card features several fighters who are largely unknown to the Bellator audience. Should fans expect much long-term out of Luka Jelčić, Mihail Nica or Carlos Leal Miranda?

Only Jelčić might deliver. He has been pretty great on the European regional circuit so far. Jelčić isn’t facing some journeyman fighter on a Bellator card in Europe, though. Instead, he is facing Brandon Girtz, a legitimate fighter in the Bellator lightweight division. This is a big step up in competition for the Croatian, but if he can pull off the victory in the co-main event, it will do wonders for his career.

Lightweight is a deep division for Bellator, but a win definitely helps push Jelčić as more than just a fighter who appears when Bellator goes abroad. Jelčić has won his last four fights, all of which were first-round finishes.

Nica and Miranda face each other. Nica has fought previously for Bellator on the organization’s last trip to Italy, where he pretty impressively choked out Samba Coulibaly in the first round. Nica could be a guy to watch with a victory, but it’d be nice to see a little more from him in terms of competition.