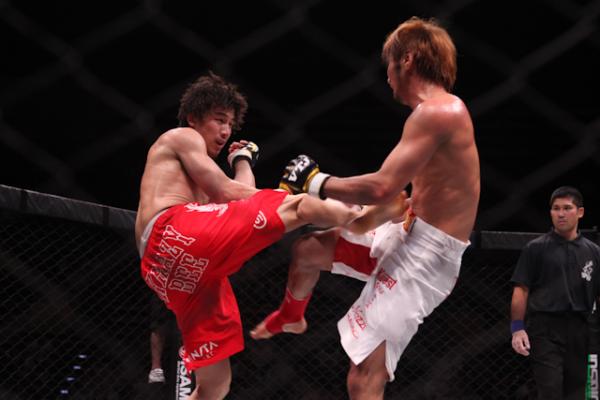 Rizin.22 and Rizin.23 Preview and Predictions

The second show serves to crown a new bantamweight champion when Hiromasa Ougikubo meets Kai Asakura in the headliner. The supporting cast is full of prospects, including Kazumasa Majima, Makoto Takahashi and Tatsuki Saomoto. Kickboxing fans will be treated to a rematch between Taiga and Kento Haraguchi, plus the return of KAITO.

Two nights, two Rizin cards. If fans can only pick one, which of these shows should they watch?

While the lineup for the first night isn’t too shabby, fans who can only catch one of these cards should opt for the second night of fights.

The championship headliner between Hiromasa Ougikubo and Kai Asakura is the real gem of this weekend’s Rizin offering and shouldn’t be missed. In addition, the second show features a heavy dose of fighters with really strong records, including Yuki Motoya, Mamoru Uoi, Yutaka Saito, Kazumasa Majima, Seiichiro Ito, Makoto Takahashi and Tatsuki Saomoto. This is a great glimpse at up-and-coming Japanese talent.

The exception here comes for women’s MMA fans and kickboxing enthusiasts. If your focus is on either of these categories, then the first night of fights is your best bet. The kickboxing offerings include separate fights for Yoshinari Nadaka and Rui Ebata. All of the women’s MMA contests take place during the first show, too. Most notably, fans will get to see Ayaka Hamasaki and Kanna Asakura, which brings us to our next question.

Top female fighters Ayaka Hamasaki and Kanna Asakura both take to the ring in risky bouts on the first night of fights. Hamasaki is set to clash with veteran Tomo Maesawa in a strawweight affair. Meanwhile, Asakura meets Mizuki Furuse, a fighter whose record is just one win above the .500 mark, in an atomweight contest. Will either lady suffer an upset this weekend?

Risky is an understatement. Hamasaki is tasked with an opponent in Maesawa who has spent much of her career at atomweight and, despite floating around near the top 15 in the division, only holds a 13-10 record. Meanwhile, Asakura clashes with a 19-year-old who has seemingly found her groove as she has matured. A loss for either of these stars would be a total disaster.

The 38-year-old Hamasaki is likely to breeze through this fight. The former Jewels 115-pound titleholder is a legend in the sport and has had a lengthy run as one of the world’s top atomweights and one of Japan’s top strawweights. She’s suffered only three career losses, including two at strawweight, but those stumbles came against the tough trio of Claudia Gadelha, Livia Renata Souza and Seo Hee Ham. Maesawa, 32, has had some solid rivalries against the likes of Mina Kurobe, Satomi Takano and Emi Tomimatsu, but she’s fighting above her league here.

Asakura could be in for a bigger struggle, but she should still have her hand raised when the dust settles. The 22-year-old has compiled an excellent resume that includes wins over such notables as Rena Kubota (twice) and Alesha Zappitella. She’s even made a successful appearance in Bellator with a victory over Jayme Hinshaw. The wild card this weekend, though, is Furuse. Yes, the teenager holds an unimpressive 7-6 record, but many of her struggles came when she was only 16 and 17 years old. Her only loss since her 18th birthday came against the aforementioned Tomimatsu, and Furuse’s most recent victory came against seasoned veteran Yasuka Tamada. Furuse is the more likely fighter to pull off the upset, but even her odds of doing so aren’t wonderful. Asakura is a strong grappler who should be able to find a submission for the win.

The vacant Rizin bantamweight championship is on the line in one of the featured bouts of the second night of fights. The two title hopefuls are Hiromasa Ougikubo and Kai Asakura. Who emerges with the belt?

American fans are much more likely to recognize Ougikubo’s name from his time as a flyweight competitor on The Ultimate Fighter 24 and his finals match-up against Tim Elliott. The 33-year-old has found plenty of success in the time that has followed his reality-show appearance. He’s gone on to make a couple of defenses of his Shooto flyweight crown, but his star turn has come in Rizin, where he battled former UFC flyweight title challenger Kyoji Horiguchi in a losing effort and edged both Yuki Motoya and Shintaro Ishiwatari in narrow decisions. Ougikubo is a grinder who has 15 decision victories and seven submission finishes.

Asakura isn’t as well known on American shores, but he’s a solid star in Japan. After an 8-0 start, he suffered his first loss in a trip to South Korea’s Road Fighting Championship to meet Je Hoon Moon. His next fight was his Rizin debut, which he won. It was the beginning of a huge campaign in which he avenged his prior loss to Moon and also stunned the aforementioned Horiguchi for a 68-second knockout finish. Asakura was finally humbled again in a late 2019 rematch with Manel Kape, who avenged a prior loss to Asakura by finishing the rising star via strikes in the second round of their fight.

Asakura’s loss to Kape came in a fight for the vacant bantamweight title, but then Kape departed Rizin for the UFC. This provides Asakura with another opportunity to capture the gold, but it comes against another difficult opponent. Ougikubo can grind out wins against all but the very best.

The 26-year-old Asakura’s finishing abilities, especially via knockout, could be the difference here. He has to maintain distance and avoid the clinch that Ougikubo can use to neutralize opponents. If Asakura can make effective use of his striking abilities, he’ll walk away with the decision nod and the title.

Are there any significant kickboxing bouts here that are worthy of the attention of MMA fans?

There’s plenty here to appeal to MMA fans who might want to dip their feet into the kickboxing waters.

The first night of action features two key kickboxing contests. Rizin made a huge acquisition when it signed Yoshinari Nadaka. The 19-year-old phenom is already 30-6 while unifying the Rajadamnern and Lumpinee stadium championships. Nadaka gets a showcase fight against 18-year-old Yuushin. Meanwhile, Rui Ebata, a top fighter at 55 kilograms, returns after a tough knockout loss to Tenshin Nasukawa to close out 2019. Ebata has a less daunting task awaiting him in the form of Seiki Ueyama.

The second night of fights includes a rematch between Taiga and Kento Haraguchi, as well as the return of KAITO, whose last Rizin appearance came in 2018. Taiga, a former K-1 champion, and the rising prospect Haraguchi engaged in a close fight at Rizin 13 that ended in a draw. Since then, the 23-year-old Taiga has struggled to find any consistency. Meanwhile, the 22-year-old Haraguchi has excelled under the Rise banner, where he claimed the vacant 63-kilogram title. KAITO is looking for a rebound win after he suffered a February loss. It shouldn’t be too difficult to find against Daryl Lokoku, a judoka who has largely focused on MMA.

The catchweight affair between Seiichiro Ito and Makoto Takahashi at Rizin 23.

The 26-year-old Ito has suffered losses in two straight MMA fights, but the defeats came against solid competition in the form of Manel Kape and Tatsuki Saomoto. Ito’s a strong grappler who has seven submission victories.

Takahashi has suffered just one loss in his pro career, and it came against Tatsumitsu Wada. That’s not too shabby for the 20-year-old prospect, who has bounced back with four decision wins against veteran competition.

Takahashi’s most notable opponents thus far are Yuya Shibata and Yusaku Nakamura. If he manages to have his hand raised against Ito, it would be the highlight of his career. He’ll have to outwork Ito for a decision, while Ito will definitely be hunting for the tapout.