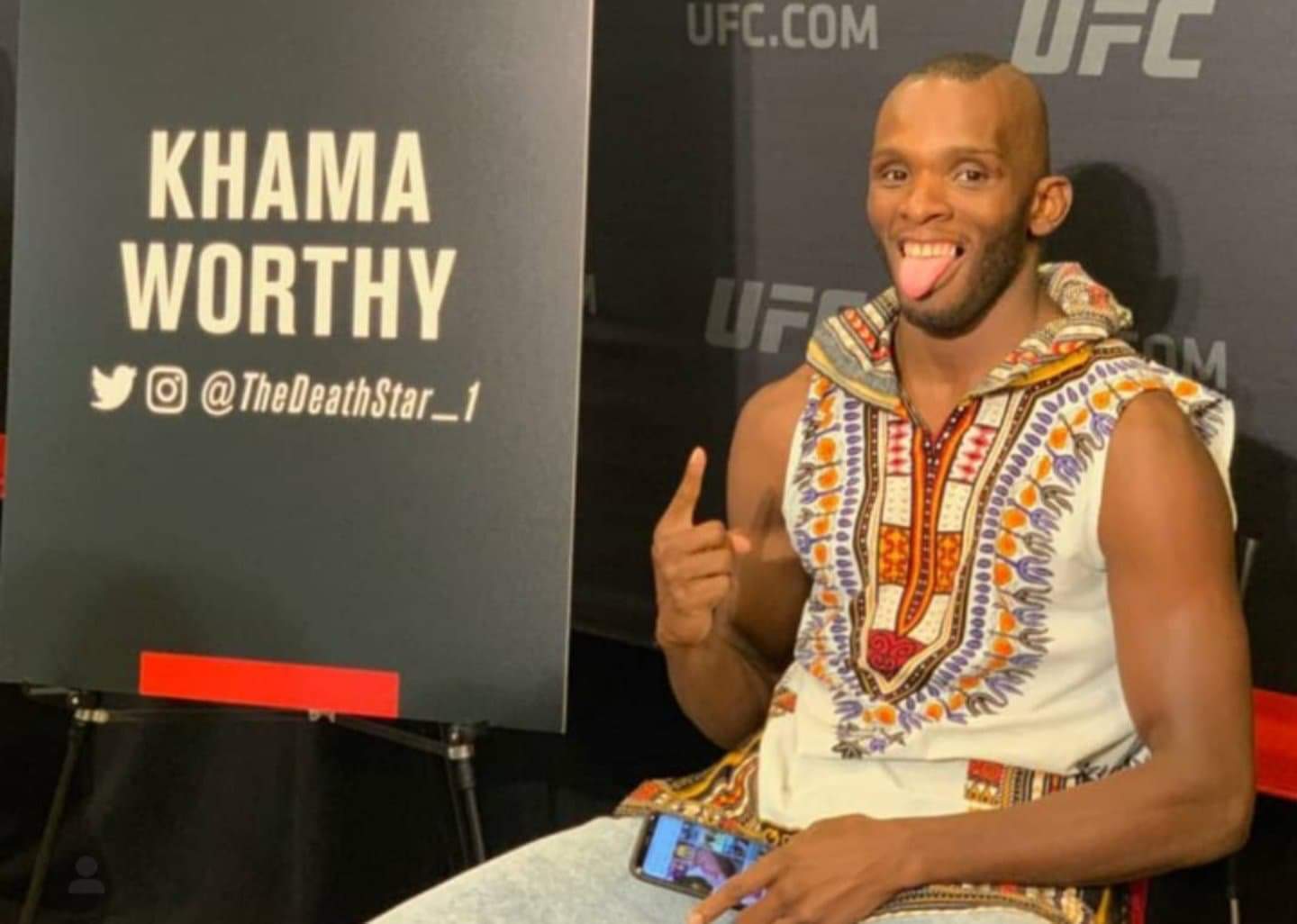 UFC 249’s Khama Worthy: ‘I Have a Way of Handling Things’

Big families come with certain dynamics. Bathroom lines, food rushes at nearly every meal, and, of course, that weird disconnect between the oldest and youngest siblings. If there is one thing that always stands out, it’s that it’s every man and woman for his/herself.

UFC lightweight and Pittsburgh native Khama Worthy comes from a big family. He has two brothers and five sisters. The women greatly outnumber the men. He is fourth in the birth order, so, as any middle child knows, he was like a lost soul on an island if he didn’t speak up.

“When I was growing up, you had to make sure you were assertive,” Worthy told Combat Press. “My little brother also fights, and I got some work in with him today. Growing up was a pretty simple life. I was homeschooled, so I was a little bit different than everyone else. I kind of embarked on that journey and tried to be unique. I didn’t go to college, because that wasn’t really my thing.”

No, Worthy did not go to college, but he chose a different path to success. He didn’t do much fighting growing up. His father did some traditional martial arts when he was very young, but that was about all of the exposure he had.

“I’ve always liked martial arts and stuff, and I was living in New York at the time,” Worthy explained. “A guy asked me if I knew what mixed martial arts was, and then I went outside and saw a billboard for it. I watched some DVDs and decided I was going to start training and stuff. I didn’t really find a place that I liked in New York, so I ended up moving back to Pittsburgh.”

“It was called Fight Club Pittsburgh,” said Worthy. “I went to a different gym, because it closed down for a few years, and when it opened back up, I went back there. Then, I started working there, and in the last three years, me and my girl bought it. We changed the name to The Academy of Martial Arts and Fitness.”

Worthy, his girlfriend Nicole, and their four kids — ages 14, 12, 8, and 19 months — have a big happy family of their own. It may not be quite as big as the one he grew up in, but owning their own gym allows them to make their own schedule and provide for their children at the same time.

“Business is good,” Worthy said. “It started to strengthen after I had my first UFC fight and stuff. But with the whole coronavirus right now, it’s definitely taking a hit to businesses all around the board and stuff.

“The training business is a difficult one to operate, you know? Me running a gym and fighting full-time, it’s a hard thing to do. But I only do stuff that I love. I don’t have to go to a regular job. I just teach people and teach classes. I have all the time I need to train on my own, so it allows me to be the type of athlete that I want to be. And I have my own facility, so I can go there and train whenever I want to.”

Worthy’s UFC debut took place in August, when he fought Devonte Smith on super-short notice at UFC 241. He won handily with a left hook in round one that floored Smith. The assertiveness that he gained growing up came shining through once again against a guy who had already fought in the Octagon three times.

“I was at a concert on Sunday night,” Worthy said. “I went to see Common. Me and my friend Kurt, who also trains at my gym, went to that concert. I had a couple of drinks that night, which I don’t normally do, but I had just fought three weeks before, and I was celebrating. So, I had a couple drinks, and my manager called me at 6 a.m. the next morning. I was 18 pounds over. That was a brutal cut. It was easy initially, because I was like, ‘I’m going to the UFC.’ But those last 10 pounds were rough.”

Worthy used to fight as a featherweight, but he moved up to lightweight after suffering two losses in a row across 2016 and 2017. Since moving to 155 pounds, he has gone 6-0 with wins against some veteran fighters.

“The biggest thing is that when I was fighting at 145, it was getting super hard,” Worthy admitted. “My body just wouldn’t let me get down. Like, right now, I’m sitting at about 15 to 16 over, and to drop another 25 pounds, I have no idea how I would do that. It was just taking too much fluid out of my brain and stuff. At 155, it’s just a more manageable weight to hit.”

The win over Smith was just another fight to Worthy, and it went according to plan. While that particular weight cut was a tough one, because of the short notice, he had the adrenaline rush for his UFC debut that helped carry him through.

“I was in the sauna, and Daniel Cormier was in there,” Worthy explained. “He was like, ‘Man, it smells like pain in here.’ He said it smells like when he has to cut to 205 and stuff. There was another guy in there, and he said he was dying too, and I was there having fun. I was cool, and I was super excited. But then I made a mistake. I stood up really fast, and I almost, like, passed out. I was in such a good mood, I didn’t realize how much I was putting my body to the task. The last five pounds really started to hurt, but I made weight, and that’s all that matters.”

Worthy’s UFC debut was eight months ago. He has not seen the inside of the cage since. Some fighters don’t mind a little breathing room between fights, especially those who are injury-prone. However, Worthy has fought a minimum of three times per year, with only a couple exceptions, since making his amateur debut 11 years ago. He found out in January that his next fight would be on April 18 at the now-infamous UFC 249.

“A lot of guys use time on the bench to get better, but I turned 34 in October,” Worthy said. “I’m not trying to fight past 38. I have a couple more years, and I want to get as many fights as possible.”

Worthy’s opponent was slated to be Ottman Azaitar, a Moroccan knockout artist who made his UFC debut in September when he also earned a first-round knockout. This was a fight that Worthy wanted badly.

“He’s strong,” said Worthy. “He has like an 80 percent knockout ratio. He’s tough. I know he comes in and brings his shit, and he throws. He’s not scared. I asked for that fight. I thought it was perfect. If I beat him, I get to spring in front of him. There are so many people at 155, you can’t just pick kind-of fights on the side. You’ll never get anywhere. You’ve got to take the right fights and the entertaining fights that people won’t forget about, win or lose. You have to be OK with losing to get to that point. I’m trying to get fights that people remember.”

UFC 249 was originally supposed to feature the much-anticipated — and obviously cursed — lightweight title fight between Khabib Nurmagomedov and Tony Ferguson. It was the fifth time they were scheduled to fight. However, a little more than two weeks out, due to COVID-19 travel restrictions, Nurmagomedov ended up stuck in his native Dagestan. For the fifth time, the fight was off. The same problems flowed over into Worthy’s match-up, but UFC President Dana White has been doing everything in his power to make this event happen.

Azaitar was also not going to be able to make the fight, which since has been moved from the Barclays Center in Brooklyn, N.Y., to Tachi Palace Casino Resort in Lemoore, Calif., which sits on tribal land outside of the restrictions of the state and federal governments. It is the same venue that was used by the old WEC before that promotion merged into the UFC. With Azaitar out, the UFC quickly matched up Worthy with veteran lightweight Michael Johnson.

“He holds different achievements. Michael Johnson beat Tony Ferguson. He beat Dustin Poirier. He fought Khabib. He fought Justin Gaethje. Each fighter had a different set of achievements. This one is just as important as the other one.”

The coronavirus outbreak has changed the way we live, but Worthy was ready to roll with whatever adversity came his way. He still has a gym for his fight camp, and with coaches Dave Sacks, Dan Smirnoff, Chris Matthews and Marshal Carper by his side, he is more than prepared for whomever the UFC puts in front of him. In these times of uncertainty, he has done a great job of staying focused.

“I wasn’t really worried at first, but then, when everything started to close down, I was like, ‘Oh shit,’” Worthy admitted. “Then, when professional sports started shutting down and the NBA got canceled, I was like, ‘Come on!’ Then, I had to close my business down. So, I still come in and I train. I’ve got three or four guys that come and train with me. It’s a weird time to train, but I’ll be ready.”

UFC 249 is scheduled to go down on Saturday, April 18. If the show must go on, Worthy is certainly going to be a part of it. He is not looking to just win, but also to make a big statement. His brothers and sisters, his girlfriend, and his four kids may not all be able to attend the event, but they will certainly be watching closely as he attempts to extend his winning streak to seven and assert himself as a force to be reckoned with in the UFC’s lightweight division.