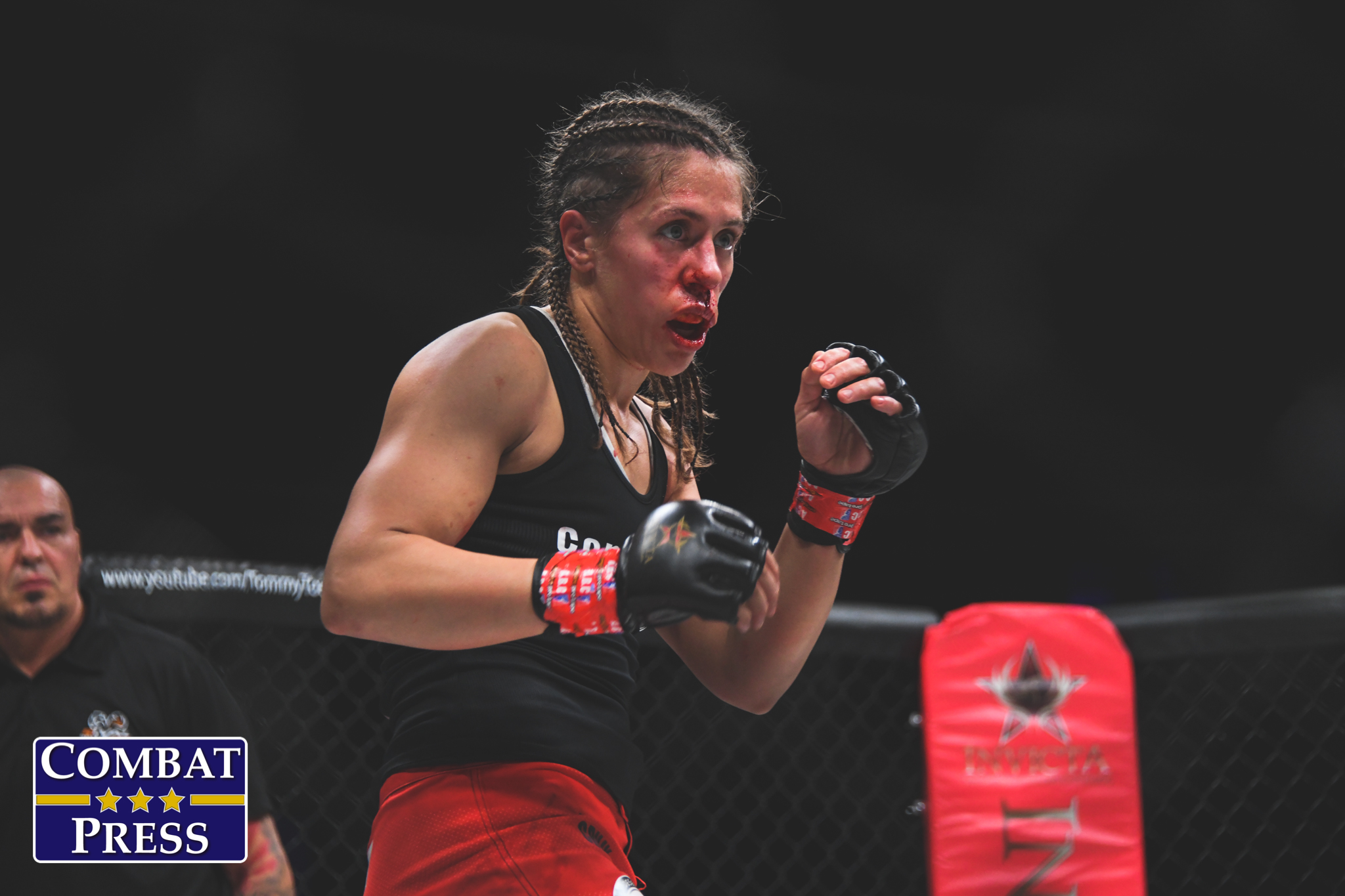 Invicta FC’s Serena DeJesus: A Role Model for the Autistic

According to the National Institute of Mental Health’s website, “Autism Spectrum Disorder (ASD) is a developmental disorder that affects communication and behavior. Although autism can be diagnosed at any age, it is said to be a ‘developmental disorder’ because symptoms generally appear in the first two years of life.”

Sounds simple enough, right? The only problem is that it’s not simple at all. ASD can appear in many forms, and sometimes not appear at all. It varies in severity and symptoms, and it can actually go misdiagnosed or undiagnosed. There are social stigmas that can come with ASD, but the worst side effect is that people without ASD a lot of times just don’t understand.

Serena DeJesus is the first known female mixed martial artist to be diagnosed with ASD. However, it wasn’t detected as early as it probably should have been.

“Growing up was a bit arduous at times,” DeJesus told Combat Press. “When I was little, my mom took me and ran away from an abusive person, you know? She met the guy who is my dad and raised me. Then, I had to go through life medicated for all the wrong reasons and not knowing why until I was 13 years old. That’s when I was diagnosed with Autism Spectrum Disorder.

“I got a case manager, who, along with my family, helped me learn better social skills and coping with my sensory issues, which I didn’t know was a thing that only myself and a few others were going through. With the right training and the right guidance, I did really well. My case manager did her job, and she bowed out when I was 20. I’m 28 now, and I have been without a case worker for eight years.”

DeJesus was raised in her native Philadelphia with her mom, dad, two brothers and one sister. Her family is very close, and it was her dad that unknowingly shaped her career path when she was only five years old.

“I was always big into my anime and my video games,” DeJesus said. “I was always playing fighting games, like Tekken. My reward every Friday, when I would pass tests in school, was I get to watch some anime videos. My dad would be watching his videos of fights, and I didn’t give a shit. I just wanted my anime. I didn’t care what he was watching.

“So, one day, I come down, and I see one of the fights. It was Paul Herrera and Gary Goodridge, and Gary Goodridge put him in a crucifix and started elbowing him unconscious. It looked cool, and the grappling transition looked like what one of my favorite characters in Tekken — King — did, and I thought it was cool. So, I became a big fan of it.”

DeJesus has always been athletic. She took a bit of taekwondo and was into powerlifting and other sports. When she was 18 and out of high school, she decided to try something new.

“I found a local gym that did Muay Thai and jiu-jitsu, and I wanted to see how it is to train and all that,” DeJesus explained. “I started training, and I did my first jiu-jitsu tournament and Muay Thai fight, and that led me to meet one of my favorite people in the world, Roxanne Modafferi.

“I went to train in Thailand, and I wanted to go again in 2014, but there were political riots. I wasn’t about to go by myself, halfway across the world, when this was happening. By this time, I spoke to Roxy, and she was back stateside.”

With the “train-cation” spoiled, DeJesus asked Modafferi if she could train with the veteran fighter for the summer. Modafferi agreed.

“We became best friends,” said DeJesus. “When I went home, later that year, I had my amateur MMA debut.”

That first fight came in December 2014 at Matrix Fights 9 in Philadelphia, and she won by rear-naked choke. She spent her first few fights traveling to Las Vegas to train with Modafferi at Syndicate MMA, but she would travel back home after her camps. However, a strange turn of events landed her — and eventually her family — permanently in Nevada.

Her parents encouraged her to stay in Nevada. The potential for fights was higher, and her training partners were based in the desert.

“It was a crossroads for me, because my family and I have always been very close,” admitted DeJesus. “I’ve never wandered too far away from them, let alone halfway across the goddamn country. They were right. I had the support system. Roxy was watching out for me, along with the rest of the Syndicate team. So, I just stayed there and have been there ever since.”

After moving across the country, DeJesus finished out her amateur career in June 2017 with a win over Arlene Culbreth in the Tuff-N-Uff promotion. A few months later, her family was in the middle of a move of their own when Mother Nature decided to intervene.

“My oldest brother was a professional ballet dancer, and he got accepted to a school in Florida,” DeJesus said. “So, my family sold their house in Philadelphia and were on their way down when Hurricane Irma came through and wrecked the conservatory my brother was going to be at and the house they were about to buy in Florida. So, they were kind of stuck.”

DeJesus suggested they join her in Nevada, and they took her advice. In the fall of 2017, the entire family headed out west to be united with their oldest child and sister once again.

The following year, DeJesus made her pro debut with a win over Kelly Clayton. Next came her Invicta FC debut in November 2019. She lost by decision to Taneisha Tennant. The break between her fights was not by choice, as she sustained an injury that kept her out of the cage for 19 months. However, she took on a tough opponent that other ladies had turned down. Her drive to be a great fighter is innate, and her desire to be a great example for others with autism is just icing on the cake.

“I was always competitive and loved what I do, but it got a little deeper as I started my MMA career,” said the bantamweight fighter. “A month or two before my MMA debut, the Sandy Hook shooting happened. When word got out that the shooter was autistic, it basically turned into an autistic witch hunt. People that had autism were the future school shooters, and they were bullied. My siblings are also autistic, and there are no real positive role models on the spectrum. We may have Dr. Temple Grandin, but no one grows up saying I want to be a farmer who makes slaughterhouses more humane. Everybody looks up to fighters, so I try to use my fighting career as a platform to blow fear-mongering stereotypes of the autistic out of the water.”

DeJesus will have the chance to tackle those stereotypes in a big way once again on Friday night. She found out just this week that she was bumped up to the main card, where she will take part in the one-night bantamweight tournament at Invicta’s Phoenix Series 3 show in Kansas City, Kan. The Phoenix Series is designed to showcase rising female MMA prospects. She will be one of eight quarterfinalists.

As of the time of our interview, she did not know who her first opponent will be — it won’t be announced until after the weigh-ins — but she is very happy to be on the main card and perfectly fine with not knowing who her opponent is until the night before the fight.

“Luck of the draw, baby,” DeJesus said. “All I know is that everything I’ve been working on, I’m confident will work against anyone. Honestly, these kind of events are all about whose will is the strongest.

“I just want to turn things around. I’m still young in my career, and now being thrust into a historical event with this one-night tournament, it’s really neat.”

This will also be the first event in a major promotion that will use open scoring, coming on the heels of far too many bad decisions in recent events.

“I appreciate it, because now we have more accountability when judges are messing up,” DeJesus stated. “And we know what they are paying attention to at that time. I think it’s a good thing. It’s a positive thing. If you’re losing, you know how to turn it around. And, if you’re winning, you know what you need to keep doing.”

The 28-year-old DeJesus has come a long way in a short time, and she is still just getting started. She has overcome a lot of adversity in life, but always puts a positive spin on things. Her great attitude has paid off. On Friday night, she will be back in action, in a tournament that airs live on UFC Fight Pass. DeJesus will have the chance to win three fights in one night.

“People should tune in to watch me fight, because I want to be a positive role model for autistic people everywhere,” DeJesus said. “To show we are not the stereotype they show on TV, and we can be more than what people expect us to be.”