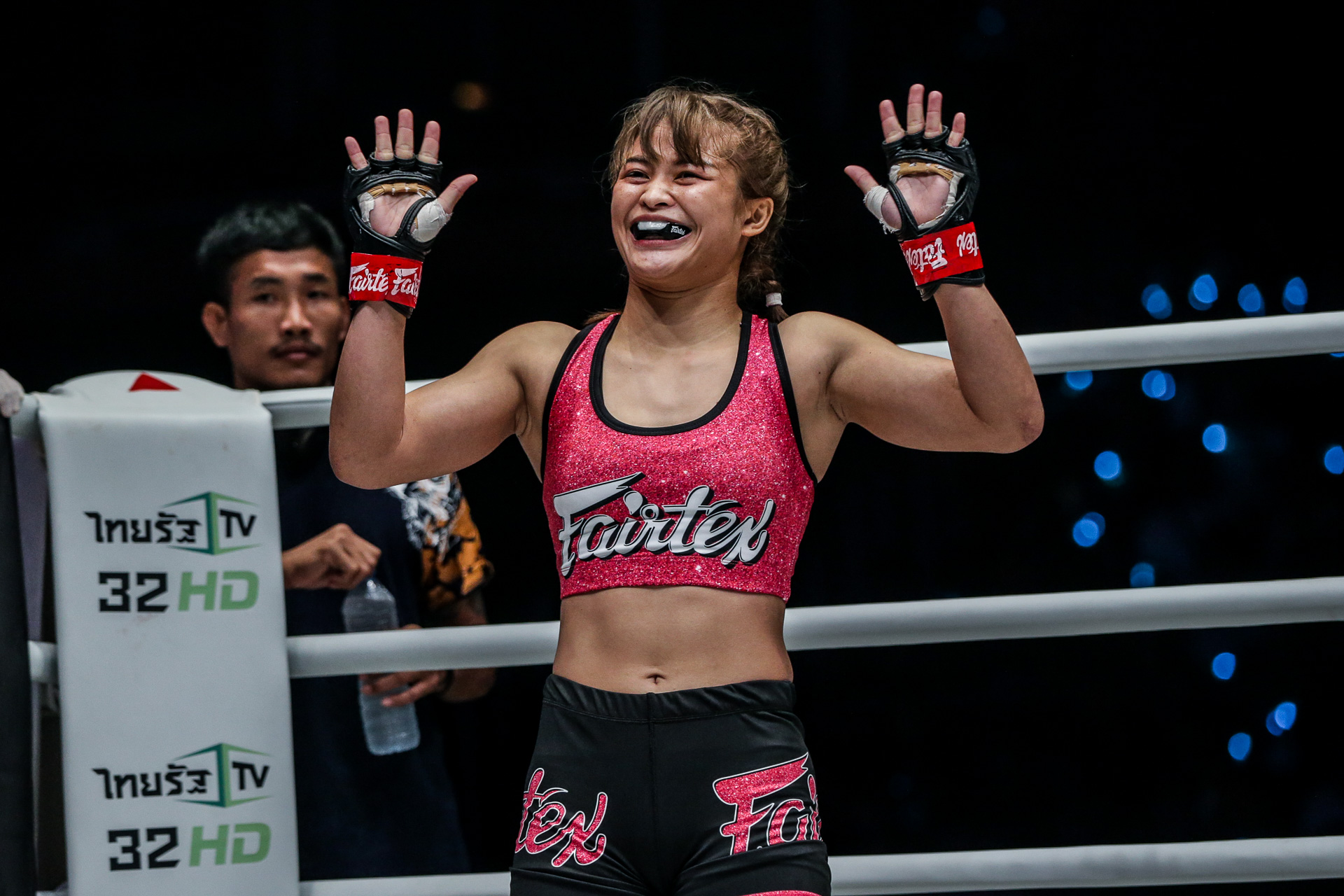 First, she won the ONE kickboxing title. The Muay Thai crown followed. Now, Stamp Fairtex has her sights set on ONE’s women’s atomweight championship. Can she complete the hat trick? Only time will tell.

Stamp isn’t fighting for a belt at Friday’s ONE Championship: Unbreakable III, but she needs to get past opponent Alyona Rassohyna to move one step closer to a crack at the gold. Thus far, Stamp is undefeated through five opponents in her MMA campaign. Only two of those foes come even close to half the experience that Ukraine’s Rassohyna will carry into the cage this weekend in Singapore. The 16-fight veteran is a skilled grappler, too, which could pose problems for a striker like Stamp.

Stamp and Rassohyna top a six-fight bill that features only MMA action. The lineup also includes such notables as Shoko Sato and Ryuto Sawada. Sato is set for a bantamweight encounter against Tiger Muay Thai’s Fabricio Andrade. Sawada takes on Robin Catalan in what could be a pivotal strawweight affair.

Three additional fights round out the card. Pakistan’s Ahmed Mujtaba returns to action after nearly three years on the sidelines and meets India’s Rahul Raju in a lightweight contest. At bantamweight, Tial Thang puts his perfect record on the line against Paul Lumihi. In a late addition to the lineup, heavyweights Mehdi Barghi and Kang Ji Won are set to collide.

ONE Championship: Unbreakable III kicks off at 7:30 a.m. ET on Friday, Feb. 5. American fans can view the entire show for free on B/R Live. International fans can tune in on the ONE app.

Stamp Fairtex has already conquered the kickboxing and Muay Thai realms with ONE, and now she’s working toward an MMA title shot. How much of a threat does Alyona Rassohyna pose to Stamp’s title ambitions and current undefeated MMA run?

Stamp has been a breakout star for the organization. She may not hold a title right now, but her undefeated streak through five MMA outings suggest that this could change in the near future. Even her title losses in the sports of kickboxing and Muay Thai came in close contests against Janet Todd and Allycia Hellen Rodrigues, respectively.

Of course, Stamp is just getting her feet wet in MMA action. Her 2018 pro debut lasted just 19 seconds before she landed a head kick to knock out 1-1 foe Rashi Shinde. Her subsequent outings have featured more experienced and successful opponents, but this has peaked with the likes of a 4-0 Asha Roka and a 3-0 Sunisa Srisen. Both ladies succumbed to Stamp before the final bell. Meanwhile, in terms of experience, nine-fight veteran Bi Nguyen has been Stamp’s biggest test. The 23-year-old went the distance with Nguyen and managed a unanimous nod for the victory.

Rassohyna’s 16 pro fights nearly doubles Nguyen’s total going into her fight with Stamp. In addition, the Ukrainian has shared the ring or cage with such standouts as Katja Kankaanpää and Seo Ham Ham, albeit in losing efforts. Rassohyna has only had two fights since 2014, though. The 30-year-old succeeded in those affairs, however, to the tune of a pair of first-round armbar finishes over middling competition in Elaine Neal and Samantha Jean-Francois.

Rassohyna’s wealth of experience does make her a legitimate threat to Stamp. The Ukrainian has scored 10 of her 12 victories via submission, whereas Stamp is known for her striking skills. The Thai fighter will have to be especially careful if Rassohyna manages to drag this fight to the mat.

Stamp could be especially vulnerable here. She has a very upright Muay Thai stance and does some of her best work in the clinch. Rassohyna has looked very aggressive since her return from a four-year layoff. The Ukrainian would welcome the clinch, as it would give her opportunities to score takedowns via throws and headlocks. Rassohyna is perfectly willing to fight off her back, and she’s a tangle of limbs while constantly seeking the submission. Yet, her more aggressive nature has also translated to a smothering top game in which she favors armbar attacks. Unless Stamp can avoid Rassohyna’s grappling altogether and outpoint her opponent from a distance, this could end in the Thai fighter’s first career loss in the MMA arena.

Is there anything else in the lineup that should be of particular interest to fans?

This is a rare instance where ONE isn’t dishing out any Muay Thai or kickboxing fights. There was one scheduled, but it was nixed and replaced by a heavyweight MMA contest. This leaves a total of six MMA bouts for Friday’s offering. The headliner is the real highlight of this show, but there are some other interesting fighters whose work will be on display.

If not for the unique weigh-in rules that the company uses, the “strawweight” affair between Ryuto Sawada and Robin Catalan would be far more intriguing. As it stands, though, this is essentially a flyweight showdown between two men who are nowhere near the world’s top 15. If the fight really did take place at 115 pounds, this would be a different matter. Japan’s Sawada is 13-5-1 with a solid resume across the Vale Tudo Japan and Shooto organizations. He’s also 4-1 under the ONE banner. Catalan is a far more modest 9-6, but the 32-year-old is coming off a career highlight knockout of Gustavo Balart. These guys have both had their ups and downs, but the winner could figure into the ONE strawweight title picture.

The remaining fights could deliver in terms of action, but it’s hard to get too excited for 46-fight veteran Shoko Sato’s fight against the rather green Fabricio Andrade, who has just six pro fights and only four wins. Meanwhile, Tial Thang, who is just 2-0, draws 11-fight veteran Paul Lumihi, and 3-0 upstart Kang Ji Won has been tasked with Mehdi Barghi, who is just 4-2. These are good opportunities for the undefeated prospects to prove themselves, but these are not marquee fights that make for a huge event.