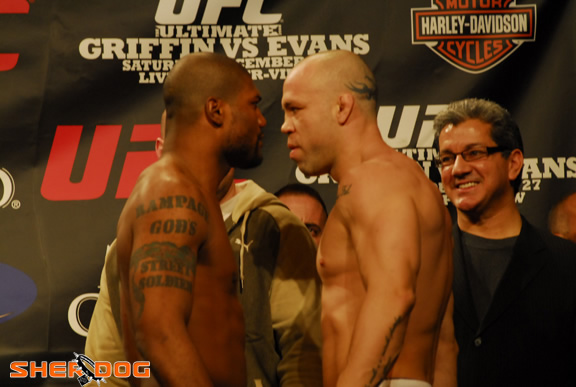 Right now, the majority of people are spending their days indoors and at home waiting out the eventual decline of the coronavirus. Combat-sports organizations have put on the brakes as well, canceling and postponing events out of an abundance of caution or due to government limitations put on large gatherings. How do fight fans fill this void? Well, let’s take a minute to remind the fans of some of the greatest UFC events of the past. Sit back, relax and watch these entire shows to get your MMA fix over the next few weeks.

When talking about the greatest UFC cards to rewatch or to recommend to prospective fans, it’s impossible not to bring up UFC 92, which took place in December 2008.

UFC 92 included eight knockout finishes through 10 total bouts. The undercard featured a unique finish that involved Pat Barry defiling the legs of Dan Evensen in a bout that ended via TKO due to leg kicks.

Overall, this card boasted a lot of fan-favorite fighters that provided the UFC with countless entertaining fights. Most of the fighters featured that night are now retired, but there is no better way to honor the elite of the decade than by watching a card highlighted by the star power that got the UFC to where it is today.

There is no way we could leave out one of Georges St-Pierre’s signature title defenses. Add four first-round finishes, and we got ourselves one heck of a card to reminisce about.

The main event featured GSP defending his UFC welterweight championship in a rematch against Josh Koscheck. The bout was a usual GSP title defense that featured the longtime Canadian champion pick apart Koscheck using his elite striking, relentless jab, and well-timed wrestling. St-Pierre broke Koscheck’s orbital bone early in the first round, and the challenger could not seem to get his groove back from then on.

The remainder of the card delivered some incredible finishes. Stefan Struve pounded Sean McCorkle in the co-headliner after McCorkle spent several months battering the Dutch standout with aggressive trash-talking. Jim Miller pulled off a fantastic kneebar finish of Charles Oliveira — yes, the same Oliveira who just submitted Kevin Lee and is now considered a top-five UFC lightweight — while Mac Danzig delivered a “Knockout of the Year” candidate when he flatlined Joe Stevenson in the first round with a counter left hook.

Want to go back and watch a UFC card that features GSP and several entertaining finishes? Look no further than UFC 124.

UFC 132 is arguably one of the best UFC cards of all time, but it just doesn’t seem to get the credit it deserves. The show featured a highly competitive bantamweight title bout between rivals Dominick Cruz and Urijah Faber, plus five highlight-worthy finishes that are sure to keep fans who need a complete card to rewatch engaged and entertained.

The preliminary card, which aired on Spike TV, featured back-to-back knockouts, with Melvin Guillard finishing Shane Roller and Rafael dos Anjos delivering a nasty End to the night for George Sotiropoulos. The main card followed with memorable finishes that include a perfect flying-knee knockout courtesy of vintage Carlos Condit, a bounce-back submission win for Tito Ortiz, and a terrifying knockout of Wanderlei Silva courtesy of Chris Leben.

To top off an already incredible night of fights, Cruz and Faber threw down in one the most fast-paced, exhilarating and competitive title fights in bantamweight History. The contest would set up a future rematch between the two longtime rivals.

Any event that results in both the main and co-main events receiving “Fight of the Night” honors needs to be on this list. UFC 139 fits the bill.

The preliminary card featured some highlights, including first-round finishes in the contest between Michael McDonald and Alex Soto and the clash between Ryan Bader and Jason Brilz. However, the main reason this card is considered UFC gold is due to the “old-school kung-fu movie” battle between Wanderlei Silva and Cung Le and the light heavyweight “Rocky movie” that took place in the main event.

In the co-headliner, Silva and Le attacked each other with everything and anything in their respective arsenals. It was truly a battle of martial-arts legends, with each competitor using their unique style and weapons to inflict as much damage as possible. Silva and Le weren’t just trying to win; they were trying to take each other’s head off.

The same could be said about the main event, which delivered quite possibly a top-three greatest UFC fight of all time. Dan Henderson and Mauricio “Shogun” Rua put on a show for fans by displaying what it means to be tough and taking it to a whole new level. For the uninitiated, we won’t give away too many spoilers, but the bout featured numerous momentum changes and an unmatched determination to achieve victory.

The UFC made sure that its heavyweight roster had the opportunity to shine, and boy did it shine. The card featured most of the era’s heavyweight stars, including Stefan Struve, Roy Nelson, Cain Velasquez, Antonio “Bigfoot” Silva, Junior dos Santos, Frank Mir and Stipe Miocic, who now reigns over the division.

This card doesn’t need much hype to warrant a rewatch. The roster and the results speak for themselves. If you are ever getting that heavyweight itch, take a trip down memory lane at UFC 146, where the heavyweights went to war.