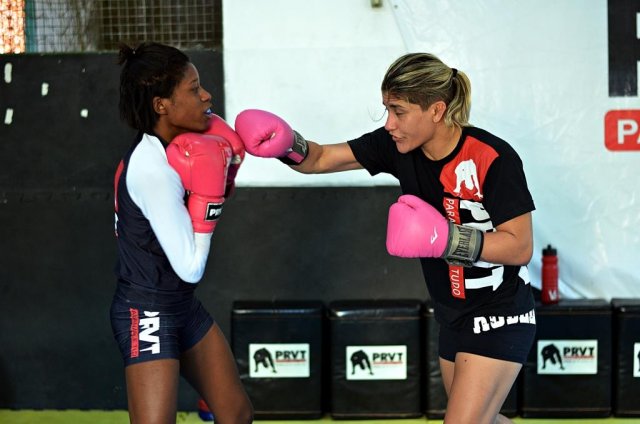 As fans watching elite athletes put their health on the line purely for our entertainment, it’s sometimes easy to forget the difficulties associated with the journey of becoming a mixed martial artist or pro fighter in general.

Agony. Defeat. Disappointment. These are just a few of the many negative adjectives that can be used to describe these difficulties.

It’s tough for the average fan to imagine being in a fighter’s shoes and having to go through events such as suffering extensive losing streaks, injuries, the wait on the sidelines while healing, the inability to work extensively while sidelined, and being cut by the company that you dreamt of joining after putting in years of hard work.

After experiencing a troubled childhood in which she was stabbed, sexually molested, and addicted to crack cocaine for several years, Priscila Cachoeira was able to clean up and eventually found mixed martial arts. She ultimately made her pro debut in June 2016 and amassed an 8-0 record going into 2018.

Cachoeira made her UFC debut against current women’s flyweight champion Valentina Shevchenko and suffered a brutal loss via rear-naked choke after Shevchenko outstruck her 230-3.

Things only got worse for Cachoeira. The Brazilian endured multiple injuries before returning to the Octagon in 2019 to suffer losses to Molly McCann and Luana Carolina. After compiling an impressive undefeated mark prior to joining the UFC, Cachoeira seemed like she was headed out the door soon after three disappointing performances in the organization.

Fast-forward to Feb. 22. Cachoeira was in a precarious situation going into her bout with Shana Dobson at UFC on ESPN+ 26. She entered the Octagon against her fellow UFC flyweight as a +165 underdog and in dire need of a win.

Cachoeira and Dobson served as the first fight on the card. They were tasked with kicking off the evening with a bang in front of over 10,000 New Zealanders in the Spark Arena. As the combatants signaled their confirmation to the referee that they were ready to go to war, the bell rang and the show began.

What fans did not expect was a 40-second knockout. Cachoeira stunned the crowd by landing a beautifully timed right uppercut that sent Dobson to the canvas. She followed the attack up with a few ground strikes until the official had no choice but to intervene and rule the bout in favor of Cachoeira via knockout.

The Brazilian native rushed to the center of Octagon, extended her hands to the sky, and bathed in her incredible performance. She conveyed signs of relief and happiness. After an extremely difficult start to her UFC career, Cachoeira was finally able to display why the UFC signed her in the first place and gave her another shot this past weekend.

After a performance nothing short of extraordinary, Cachoeira’s first win in the Octagon has effectively reset her UFC career.