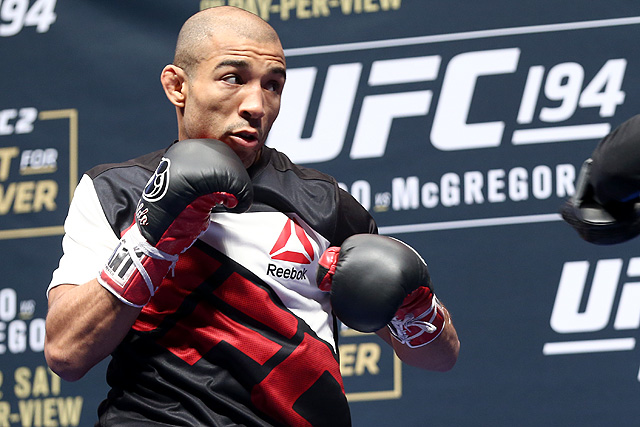 In a bizarre turn of events that started as mere rumors a couple months ago, the UFC has confirmed that Henry Cejudo’s first title defense to legitimize his bantamweight reign will take place at UFC 250 in May against former featherweight champion José Aldo.

The pairing had been rumored for months now after Cejudo apparently phoned UFC President Dana White and specifically asked to fight Aldo after the Brazilian’s split-decision loss to Marlon Moraes in December at UFC 245.

Aldo had lost a closely contested split decision to the former title challenger Moraes, but many fans and experts, including White, were clear to voice their opinion that Aldo most certainly won. Although unarguably close, Aldo was able to dictate most of the fight’s pace as he marched forward on Moraes and used his crisp striking and lethal Muay Thai skills to out-strike Moraes and control the momentum and pace of the bout.

There was concern about how Aldo would perform after dropping down to bantamweight. His name has always been linked to difficult weight cuts, and the former featherweight’s camp and the coaching staff have been transparent in the difficulties he has faced in the past. However, Aldo seemed to have a newfound energy at his new weight class and took on the No. 1 contender in an exciting bout that convinced fans that the former featherweight kingpin still has what it takes to be considered among the UFC elite in 2020.

The enigma that is Cejudo has been a fascinating story to follow since he was able to capture the UFC bantamweight championship at the expense of the aforementioned Moraes in June 2019.

After defeating T.J. Dillashaw quickly and convincingly in a flyweight title defense, Cejudo moved up to challenge Moraes for the vacant UFC bantamweight championship after Dillashaw was stripped for his use of performance-enhancing drugs.

When Cejudo and Moraes finally met to headline UFC 238, Cejudo found himself in trouble in the early rounds. Moraes used his striking and aggression to dictate the pace and put Cejudo in difficult positions. Cejudo was able to recover and went on to finish Moraes via TKO with approximately a minute left in the third round.

It was at the memorable post-fight interview where Cejudo crowned himself “Triple C.” Fans were eager to see what Cejudo would do next after capturing both the flyweight and bantamweight titles within 365 days. Ultimately, he went on to vacate the flyweight championship and chose to focus on his bantamweight reign.

There is a long list of noteworthy contenders at bantamweight who can easily argue their claim to challenge for the belt. This includes Aljamain Sterling, Petr Yan and Cory Sandhagen, all of whom are riding impressive winning streaks in the division. Instead, the UFC has opted to give Cejudo what he originally asked for in December and grant Aldo another chance at UFC gold in his home country of Brazil.

Although unexpected, this could end up being seen as a smart move by the UFC matchmaking team. Aldo is a huge name among the MMA community and is arguably the most popular Brazilian champion of all time. The other current deserving contenders don’t carry a name value even close to Aldo’s. Perhaps the UFC is being more strategic than we realize.

A bout between a champion looking to cement his legacy and arguably the most popular Brazilian champion of all time is an easy sell with fight fans. If Cejudo wins, not only does he boost his name on an international level, but he does so in front of a hostile and passionate crowd while proving to fans around the world that he is the real deal at bantamweight. If Aldo wins, the featherweight GOAT will once again be a UFC champion and do so in front of a hometown crowd eager to see their Brazilian hero return to his former glory.

Whatever happens, it’s a smart move by the UFC.