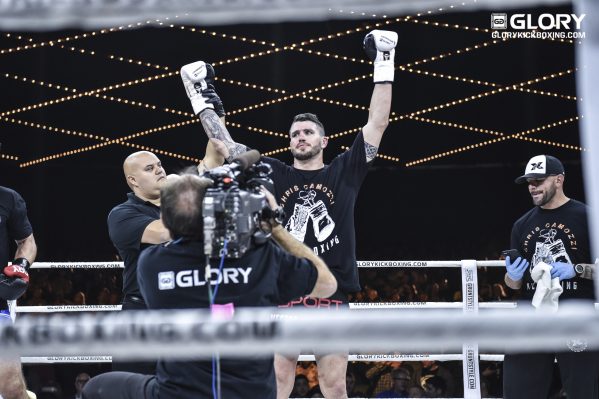 Chris Camozzi was only 19 years old when he started his professional fighting career. While a lot of people he knew from high school were going to college or deciding what to do with their lives, he was already starting his profession. However, he was years ahead of the curve, which can be a recipe for burnout.

A couple years ago, Camozzi and his wife bought Performance MMA in Englewood, Colo. The retail combat-sports supply store has been very successful, combining online and in-store sales of gear in the Denver area. It was an investment in their future, and it was a great way to break up the potential monotony of the day-to-day fight life.

Camozzi is now 31 years old. He has 37 pro MMA fights under his belt. While his store is doing great, he felt that last year was a great time to shake up his fight life. The middleweight, who has trained under the tutelage of Kru Marc Montoya at Factory X Muay Thai for the better part of his career, hit the skids on his third run in the UFC, so he decided to take things in another direction. Last summer, Camozzi signed with GLORY Kickboxing. He made his promotional debut in October with a TKO win over Kyle Weickhardt at GLORY 48.

“I was happy with it, but I’m never 100 percent happy with it,” Camozzi told Combat Press. “There are things I need to improve. There were some obstacles with the last one, even though it didn’t look like it. It’s hard to fight people when they’re backing up more and more. There were adjustments I needed to make. It was a good one to start off with, but I’m only getting better and better.”

Following his GLORY debut, Camozzi’s career really started to blossom. It’s like he’s been given a fresh start to his fighting life.

“It’s been cool,” said Camozzi. “I signed another fight with GLORY. I’ve got a fight with Mike Lemaire this Saturday. I’ve also signed a fight with [Absolute Championship Berkut] for MMA. I had in my GLORY contract that I can still fight MMA for whoever I wanted. We came to terms with ACB, so I should be making my debut sometime this summer. On top of that, I was a coach with Stipe Miocic on The Ultimate Fighter [Season 27].”

Camozzi is a TUF veteran himself. He entered the house during the 11th season in 2010, only to find out that he broke his jaw in the elimination round and would be sent home. The coaching side of the show was a much different experience.

“It was good,” Camozzi explained. “Not that I’m not at home, but I was in the gym all day long, whether it was training the team or training for my own fight. It was a cool experience to go back and be on the coaching side of it, rather than the competitor side of it. It’s always stressful. It’s different.

“I felt like it was more stressful. As a fighter, you’re only worried about yourself and winning the show. As a coach, you get close to the guys, and you wish that all of them could win. Knowing that only two of them could win was a little bit heartbreaking, because I wanted to see all of them win. You get to see their dreams come true or their dreams get shattered, so it was bittersweet.”

There was another big difference for the UFC veteran. Instead of getting bad news during this stint on the show, he got great news: his new opponent had been set for GLORY 52, which takes place this weekend in Los Angeles.

“I think I got the fight when I was in Vegas,” Camozzi said. “I was training anyway, but I’m training all the time. They told me about it, and they said Mike Lemaire would be my opponent, which I love. I instantly said yes. I’ve asked to fight him since the day I signed with GLORY. He and I were offered to fight in Lion Fight a few years ago. He’s just been on my radar as far as kickboxing goes.”

“I love the match-up,” said the Coloradan. “I think he’s actually improved quite a bit. I feel like he had a slump for a bit, but when I saw him fight in New York, I thought he looked good. It’s the other reason I like this fight. I want to fight the better guys in GLORY.

“His cardio looks better. To me, in his past fights, I thought it looked like he gassed out a little bit. Carrying a lot of muscle is tough, but he’s good everywhere. He’s got solid Muay Thai and he’s a legit kickboxer, which is why it’s a good fight for me. I’m still making my way in kickboxing, and I want to fight the best. I want to win that world title for GLORY.”

On a global scale, GLORY is arguably more popular and faster growing than the UFC, Camozzi’s former employer. While he has spent the last decade training in a well-rounded MMA environment, he is embracing his new endeavor with open arms.

“Going off that last one, I definitely like kickboxing more,” Camozzi admitted. “Even between rounds, Marc Montoya came in and was like, ‘Are you having fun or what?’ — because I was smiling, and I’ve always loved Muay Thai and kickboxing. I told the whole GLORY staff after that last one that I had a blast, man. I really, really enjoyed it, so I think I lean toward kickboxing, but I’ve done MMA so long, it’s still a passion of mine. I’ve revolved my life around this sport, so adding kickboxing, it’s the best of both worlds. I can do both.”

This summer, Camozzi plans to make a debut for another MMA organization. He plans to bounce back and forth for the foreseeable future, but he will need time to alternate between the different types of camps.

“I do change over the way I train,” explained Camozzi. “Obviously, when I’m kickboxing, I’m not working jiu-jitsu and wrestling. It’s a lot more cardio, running, pad work, bag work, and strength-and-conditioning stuff. With MMA, I need time to get my wrestling back on point, jiu-jitsu on point, and adding in all those things. Having the right timing for the right fight is definitely important to stay in the winning column.”

For now, the focus is on keeping Camozzi’s undefeated pro-kickboxing record intact during his feature fight at GLORY 52, as he faces Lemaire at the Pacific Room at Long Beach Arena. The pro fighter is still feeling young and fresh, and the opportunities ahead look very promising as he makes a run toward a world title.

“I’m coming to make a big statement in this fight,” said Camozzi. “The last one was my debut, but this is the one where I show why I’m an elite kickboxer and belong at the top of the division. I’m fighting a veteran whose entire career has been in kickboxing and Muay Thai. I need to put a beating on him, because he’s been known to win some crappy decisions in his hometown, so I can’t let it go that far.”

Camozzi would like to thank all of his coaches and training partners at Factory X, Landow Performance, and Resilience Code. He would also like to thank his family, friends, fans and sponsors: Revivid Sport CBD, Ingrained Media, Valor Bridge, 5 Star Coatings, Terphouse, and Mad Hatter Industries. Follow Chris on Twitter: @ChrisCamozzi and Instagram: @ChrisCamozzi7
Advertisement