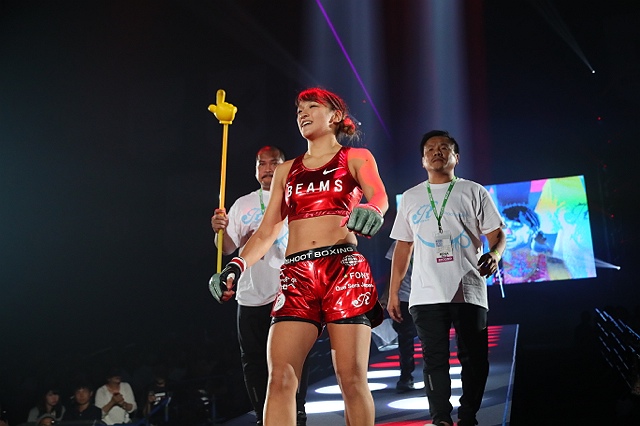 Exploring the Depths of the Women’s Atomweight Division

Atomweight. It’s the lightest weight class in most of the world for women’s MMA. It’s also the only widely recognized women’s division that hasn’t made it into the UFC yet. That doesn’t mean this is quite the barren wasteland that the women’s featherweight division has been throughout the years. True, some ladies have opted to shift their focus to 115 pounds in an attempt to land on the UFC roster, but the women’s atomweight division is still deeper than expected.

Of course, the division’s elite currently consists of Seo Hee Ham, Ayaka Hamasaki and Jinh Yu Frey. Invicta fans will also be quite familiar with the likes of Minna Grusander, who gave Frey two competitive title fights, and Ashley Cummins, whose clash this past weekend with Frey resulted in yet another razor-thin decision for Frey. There are other familiar names too, including Alesha Zappitella, Kelly D’Angelo, Jessica Delboni, Lindsey VanZandt, Alyse Anderson and Jillian DeCoursey, but the depths of the division run far deeper. Let’s get familiar with some other contenders and rising prospects among the 105-pounders.

Asian MMA fans are quite familiar with the 22-year-old Asakura. Meanwhile, U.S. fans are just getting their first glimpses of this up-and-coming talent. Asakura has already tangled with such notables as Saori Ishioka, Rena Kubota (twice), Hamasaki, Tomo Maesawa, Miyuu Yamamoto and Zappitella. Her only losses among that group came against Hamasaki and Yamamoto. Asakura has primarily fought for Deep Jewels and the Rizin Fighting Federation, but she recently appeared at Bellator 237 as part of the year-end co-promotional effort between Bellator and Rizin. Asakura was able to submit Jayme Hinshaw in the third round of her Bellator debut. The youngster is already a staple in the Combat Press Women’s MMA Rankings and continues to make a case as a member of the atomweight’s upper echelon.

Kubota is another top-10 staple who has not seen much exposure to U.S. fans. The 28-year-old’s rise actually came in the world of Shoot Boxing, but she started crossing over into MMA with Rizin beginning in 2015. Early wins over a rookie Yamamoto and veterans like Dóra Perjés, Andy Nguyen and Irene Cabello proved that she could hang in her new sport of choice. Kubota has struggled against Asakura, but her only other pro defeat came against VanZandt. Kubota avenged that loss six months later when the two, who first met at Bellator 222, rematched at Rizin 20 as part of the 2019 year-end co-promotional effort from Rizin and Bellator. Like her Japanese counterpart Asakura, Kubota is edging toward the upper tiers of the division.

Our third pick from Japan has already been mentioned as an opponent for Asakura and Kubota. It was actually her victory over the former that put her on the map. Yamamoto, another Rizin regular, possesses a modest 6-4 pro mark, but she entered into the deep end of the atomweight shark tank from the get-go. The “Fighting Queen” won just one of her first three fights, with losses to the aforementioned trio of Kubota, Nguyen and Cabello. She has since turned things around to compile a 5-1 run that includes the upset of Asakura, the avenging of her loss to Nguyen, and victories over Saori Ishioka and Mika Nagano. Yamamoto’s only loss in this stretch came to the world’s top atomweight, Ham.

Japan isn’t the only country to produce atomweight talent. Ukraine is home to the 29-year-old Rassohyna, who has been competing professionally since 2010. The upstart’s 12-4 mark is actually pretty solid for an atomweight competitor, but she definitely needs to upgrade her overall competition. Rassohyna’s most notable victory came against the 7-6 Elaine Neal. This isn’t for lack of effort, though. She has appeared opposite of Ham and Katja Kankaanpää, but came up short in both affairs. However, she did go the distance with Ham, the world’s top 105er.

OK, so we’re back to Japan again — there’s no denying that it’s a huge source of talent for this division. Fujita is easily the most obscure name on the list so far, but that could change over the next couple of years. The 29-year-old stumbled out of the gates in 2015 with a debut loss, but she’s gone on to win five in a row. The Grachan regular has competed against equally inexperienced opponents thus far, but she did recently venture to Pancrase to record a victory over rookie Yerin Hong. Fujita has a lot left to prove, but her 5-1 overall record makes her a prospect to keep tabs on.

Sometimes, it’s all about fighting in the right weight class. Just ask Mexico’s Silva. After an ill-advised start to her career that included fights at 125 and 115 pounds, the “Bunny” seemingly found her rightful home at 105. She’s gone from an 0-3 start to her career to a six-fight winning streak. Silva has become a fixture for Combate Americas, where she’s recorded three stoppage wins, including a first-round submission of Nicdali Rivera-Calanoc and a TKO of Sheila Padilla. Her last fight did come at a 110-pound catchweight, so making weight could become an issue. If she can hit her mark at the scales though, she could become an atomweight star for her current employer.

The American is very young in her professional MMA career, but her October debut was a big first step. The 27-year-old overwhelmed opponent Rebecca Bryggman with strikes in a Bellator 231 prelim bout. This came on the heels of a 7-1 campaign at the amateur level that included five finishes. Her first pro victory should keep Bellator interested. If not, Reed could land in Invicta or overseas. Regardless, her strong history as an amateur could signal a future star in the making.

We end where we started, in the Land of the Rising Sun. Japan’s Shimizu is another up-and-comer who could soon make big strides in the atomweight division. Thus far, she’s perfect through five pro outings. The 30-year-old “Princess Bee” debuted at Rizin’s 2018 year-end show with a win over 2-2 opponent Nanaka Kawamura. She has gone on to compete for Deep Jewels, Rizin and Bellator. Her most recent Rizin victory came via a unanimous verdict over Tabatha Ann Watkins. At Bellator 237, part of Bellator’s year-end co-promotional effort with Rizin, Shimizu squeaked past Nguyen with a split verdict. We’ll see if she can maintain that perfect record in 2020 against what is likely to be an elevated level of competition.