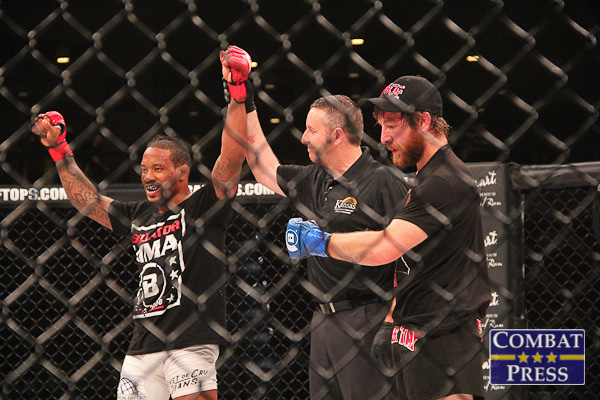 Do you ever catch your favorite character in a TV series making questionable choices? You’re just sitting there, watching the character make a decision that leaves you dumbfounded. Then, a few episodes later, the storyline comes full circle and, all of a sudden, everything makes sense.

That’s where MMA fans find themselves with the Bellator 160 card.

The main card features a strong headliner of established names, but there are only a few names of note underneath. However, take one look at the preliminary card and you’ll notice there are more than enough names to fill out another main card. This includes a pivotal featherweight contest between Bubba Jenkins and Georgi Karakhanyan, the Bellator debut of Kevin Ferguson Jr. (aka “Baby Slice”) and Chinzo Machida, the brother of former UFC champion Lyoto Machida.

Jenkins and Karakhanyan were even originally slated for the main card before getting bumped to the prelims recently.

Yes fight fans, the rumors are true. I have been demoted from co-main event, to main fight card, to prelims…Results will be the same☝👊

Yes fight fans, the rumors are STILL true. Demoted from co-main event, to PRELIMS… Results will be the same 👊 #Putbubbaonthemaincard

Although Jenkins sees the move as a demotion, it’s pretty clear that Bellator doesn’t mean it as a slight to the former NCAA Division I wrestling champion. On the contrary, it’s actually clear what Bellator has up its sleeves.

The organization has been drawing some incredible ratings for its tent-pole events. While the minor events don’t draw anywhere near the same level, they’re still clearly doing well on Spike TV. With established names like Benson Henderson and Patricio “Pitbull” Freire, the main card is virtually guaranteed to draw a crowd. By moving fights like the featherweight clash between Jenkins and Karakhanyan to the prelim card, Bellator is creating interest in a portion of the card that previously gave fans little reason to tune in. Adding in Baby Slice and Machida to the lineup further drives interest into the preliminary card, which will be streamed on Bellator’s website. It’s a move to increase Bellator’s digital presence and prop up the digital numbers.

“As everyone knows, in today’s world it’s important to have a strong digital presence and do everything possible to draw attention and really drive traffic to Bellator.com,” Bellator President Scott Coker said to Combat Press. “With our athletes being the focal point of our business model, there is no better way to do just that, than to put the highest quality fights not only on Spike, but also during our Bellator.com-streamed preliminary card.”

Although a slight gamble to dent the egos of those who world normally command a placing higher up on the card, the move has paid off for the promotion.

“In 2016, Bellator.com has experienced double-digit growth on its coverage of the Bellator prelims over last year. It’s truly a testament to the growing talent pool we have at Bellator and the ability to fill the card from top to bottom,” explained Coker.

It’s a smart move by Bellator to help drive traffic to its website and draw more eyeballs to the product. We’ve seen the UFC kick off this strategy by putting marquee match-ups featuring Anderson Silva, Michael Bisping, Rafael dos Anjos and Eddie Alvarez on the company’s Fight Pass streaming service. Bellator’s prelim stream will be free, but the reasoning is still sound. Bellator should see record numbers for the Bellator 160 preliminary-card stream. MMA fans just need to make sure their internet connection is strong come Aug. 26.