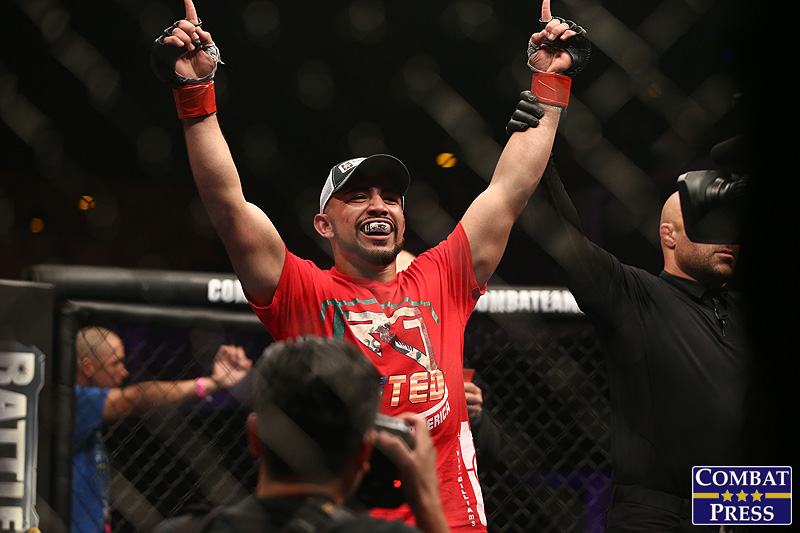 Combate Americas is ready to crown its inaugural lightweight champion. It’s a no brainer, then, that the company would call upon Rafa Garcia as one-half of its title pairing. The undefeated Cub Swanson disciple will have to get through Erick Gonzalez in order to grab the championship belt.

Gonzalez, 27, has not managed quite the level of consistency we’ve seen from Garcia. “The Ghost Pepper” already has three losses on his pro resume, including two defeats under the Combate banner. He also faltered once as an amateur, though he ultimately posted a 7-1 mark before turning pro. The Fight Science MMA product has become quite adept at finishing opponents with his ground-and-pound attack. His Combate setbacks came in a decision loss to Danny Ramirez and a submission at the hands of Andrés Quintana in a foray into the featherweight division. He bounced back from the Quintana fight with striking stoppages in his two most recent affairs, which came against Alejandro Martinez and Won Sik Park.

The 25-year-old Garcia, who was introduced to MMA at age 13 by his father, debuted in 2014 and picked up four wins before joining the Combate roster via the league’s open tryouts. His promotional debut came in early 2017 when the “Gifted” one needed just 64 seconds to find a heel hook for the submission victory over Raúl Najera Ocampo, who had entered the bout as a 4-1 prospect. Garcia, who has a background in high school and college wrestling, continued his run with a second-round submission of .500 fighter Marcos Bonilla and a majority decision over Chase Gibson. Over his last three fights, the Team Punisher fighter added a first-round knockout of Bellator and World Series of Fighting veteran LaRue Burley, a submission of Edgar Escarrega, and, perhaps most impressively, a submission of UFC vet Estevan Payan.

Garcia has a plus ground game and the wrestling skills to easily plant most opponents on the mat. However, he’ll again give up several inches in height and a massive six inches in reach to Gonzalez. Gonzalez, like Payan before him, also provides Garcia with an extraordinary challenge on the ground, where he likes to batter opponents from top position and hunt for submissions. Garcia’s best work comes on the canvas, but he’ll have a well-versed grappler to contend with here. In Garcia’s favor, Gonzalez has tapped once as an amateur and once as a pro.

There’s really only one option for Garcia if he doesn’t want to get picked apart from the outside by the much longer Gonzalez. Of course, Garcia will have to set up his takedown attempts with some striking, but expect the undefeated Mexican prospect to drag this fight to the mat early and often. Unless Gonzalez can stuff Garcia’s takedowns, he’s going to have a hard time winning this fight. Garcia should add another submission loss to Gonzalez’s record.

If the name Kyle Daukaus sounds familiar to you, then there’s a good chance you’ve been keeping tabs on Dana White’s Tuesday Night Contender Series. The reigning Cage Fury middleweight champion won his June fight over Michael Lombardo as part of the third season of the Contender Series. Despite his dominant performance — Daukaus even took one scorecard 30-25 — and his multiple attempts to finish the fight, the undefeated up-and-comer didn’t catch White’s eye. Instead, he now returns to Cage Fury Fighting Championships to defend his belt at the organization’s 78th show. Daukaus draws Stephen Regman as his challenger.

Daukaus posted just a 5-5 record as an amateur, but he turned into a revelation at the professional level. Since his 2017 debut, the Martinez BJJ export has reeled off seven wins, including six submission finishes. Only his Contender Series outing against Lombardo went the distance, and it wasn’t for lack of effort by Daukaus, who went for armbars and chokes. He didn’t get the tapout, but he rolled to an easy judges’ nod.

The 28-year-old Regman is also a Contender Series alum, but he did not fare quite so well in his audition in front of Dana. “The Predator” was submitted in the second round by Antônio Arroyo, who was awarded a UFC contract. It was hardly Regman’s first taste of adversity. The Killer B fighter went 7-3 at the amateur level and suffered two of his losses by way of submission. Since turning pro in 2013, he has suffered four defeats, including a split-decision loss in his debut effort. A former mainstay for Cage Fury, the veteran has also made stops with Ring of Combat and the Legacy Fighting Alliance.

Regman has managed to avoid submission losses as a pro, but his amateur defeats via kimura and armbar are a huge red flag heading into a showdown with a grappling powerhouse like Daukaus. Regman relies on his striking arsenal to get the job done, but he’ll have a hard time implementing his strengths if he’s having to defend off his back on the mat.

Daukaus should enter this fight with a chip on his shoulder. He was overlooked by White on the Contender Series, but he posted a stellar performance against a fighter based out of American Top Team, one of the world’s best camps. The reigning Cage Fury champ also flashed some solid striking against Lombardo, and those striking skills could come in handy against Regman as well.

This figures to be an even easier fight for Daukaus than his one-sided drubbing of Lombardo on the Contender Series. He might use this opportunity to test his improved striking out, but he shouldn’t underestimate Regman’s power. If he’s wise, Daukaus will plant his foe on the canvas and sink in an armbar or choke for the first-round finish.

The men’s strawweight division doesn’t get much love. Hell, it hardly exists outside of the confines of Asia. Shooto is one of the few organizations that does feature these diminutive athletes, including young prospect Ryohei Kurosawa. You might also know him as Ken Asuka. At its Sept. 22 event, the promotion pairs Kurosawa with his latest test, Ryosuke Honda.

Kurosawa, now 26 years old, was the 2013 Shooto Flyweight Rookie Tournament champion and went undefeated in the Infinity League 2014 tournament. The Paraestra Matsudo product was perfect through his first eight fights after turning pro in late 2012, but his undefeated streak was snapped when he met Junji Ito at Shooto’s Mobstyles 15th Anniversary event in 2015. He rebounded with a victory over veteran Tomohiro Adaniya at a Vale Tudo Japan show to spark a new winning streak that is now up to four fights. His last three victories, one of which came in 2016 and the other two in 2019, have all been stoppages.

The 28-year-old Honda shares a common opponent with Kurosawa: the aforementioned Ito. Hondo, like Kurosawa, struggled in this test. Unlike Kurosawa, who lasted just two minutes before suffering a knockout courtesy of Ito, Honda was able to make it to the scorecards before suffering his setback. The CAVE export debuted in 2017 with a draw against Yuto Sekiguchi, but he won his next three fights. After the loss to Ito, Honda bounced back with a submission victory over Shuto Aki.

Kurosawa has established himself as a top-tier strawweight, and Honda hardly seems like much of a threat. However, anything can happen in MMA — and especially in Japanese MMA. That said, this looks to be a fairly easy fight for the former Shooto champion. Honda is another tough fight, but “Ken Asuka” should outpoint Honda en route to a decision win.