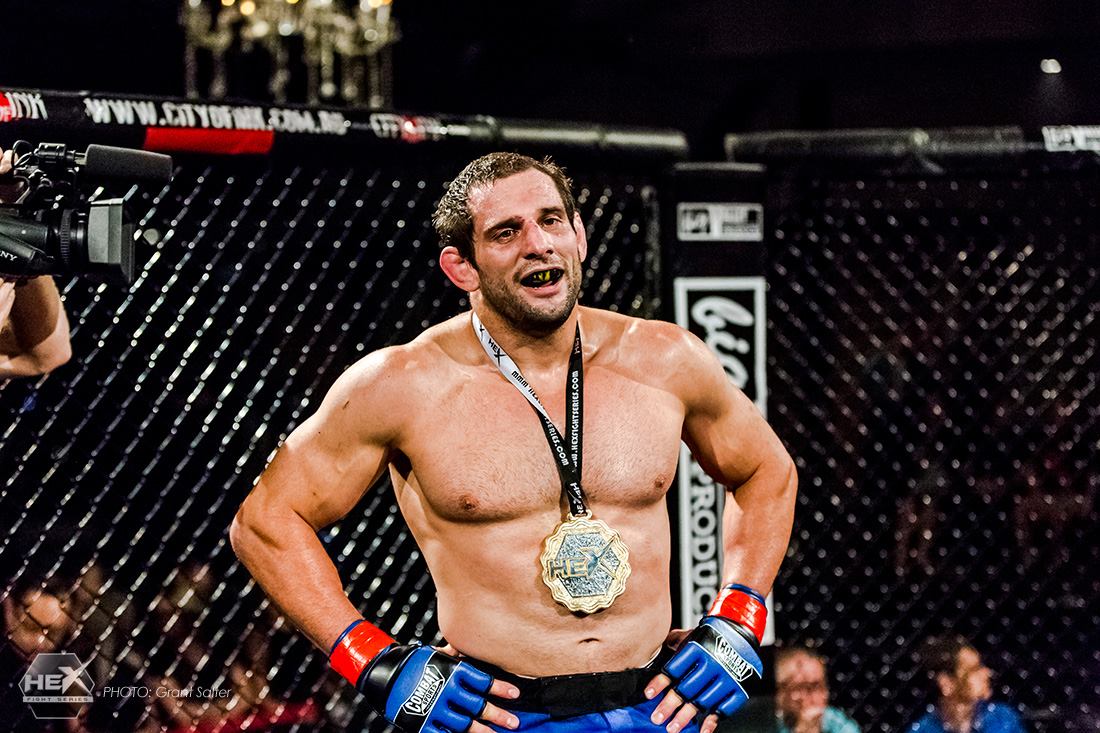 Marif Piraev hasn’t made waves on the global scene yet, but it seems like only a matter of time. Piraev has a head-turning 28-2-1 mark, and he’ll try to add another win to his tally when he headlines MFP 231 on Saturday. The welterweight stud is set to meet Brazil’s Rodrigo Caporal.

Piraev, 26, debuted in 2011 and rolled to an 18-0-1 mark before suffering his first setback against Mateusz Gamrot at KSW 32 in 2015. He had a turbulent couple of years following the loss. The “Piranha” was scrapped from a May 2016 fight. He was forced out of his next scheduled bout later the same month when he was recalled for army duty. Finally, his next fight was called off when he was hospitalized due to weight-cutting issues. Piraev was able to get his prospect run back on track following more than two years on the sidelines. He returned in mid-2017 and won two fights. He suffered a TKO loss to Tofik Musaev in early 2018, but he has gone on to add eight more victories to his record against varying levels of competition. The Krepost Fight Club member has 14 submissions and five victories by way of knockout.

The 36-year-old Caporal is an accomplished Brazilian Jiu-Jitsu practitioner who competed for the Atos Jiu Jitsu team. His venture into MMA began in 2005, but he was a mediocre 4-4 by the end of 2010. The Brazilian moved to Hong Kong and found success under the RUFF banner, where he even topped future UFC fighter Lipeng Zhang. Caporal compiled a nine-fight winning streak before suffering a loss at the hands of Shmail Zavurov. This kicked off a rough four-fight stretch in which the Brazilian was winless. Caporal even lost to the aforementioned Zhang during this skid. He regained his footing in a trilogy fight with Zhang in 2017, but he has not fought since.

Piraev has trained alongside the likes of Vitaly Minakov, Ali Bagautinov and Gasan Umalatov. He has a background in boxing and sambo, and he has demonstrated solid striking to accompany his ground game. His first real test came against Benjamin Brinsa, who was briefly under contract with the UFC before the promotion realized that it might have a Neo-Nazi hooligan on its hands. Piraev needed less than two and a half minutes to hand Brinsa, who was undefeated through 13 fights at the time, a triangle-choke submission loss. He continued to fight quality competition and paid for it with losses to Gamrot and Musaev. However, he also profited by way of wins over the likes of veterans Gilmar Dutra Lima and Naoyuki Kotani, as well as prospects Jim Alers and Alexander Makovoz. He has peppered in some questionable fights, though, including scraps with rookies Abakar Magomedov, who lasted just 65 seconds before submitting to a triangle choke, and Eduard Vdovenkov, plus sub-.500 fighter Alexey Valivakhin. Piraev’s biggest weakness might be his willingness to sacrifice position and even fight off his back in hopes of attacking with submissions.

Caporal makes for an intimidating opponent on the grappling mats, but much less so in the MMA cage or ring. He’s hardly ever been stopped, though. Surprisingly, the one man to do it, Vitor Pimenta, did so via rear-naked choke. Piraev has put up strong submission numbers of his own, but he might end up biting off more than he can chew if he opts to turn this into a grappling affair.

Piraev has fought — and defeated — enough quality competition to hush doubts that could be cast upon him from his fights against rookies and fighters with losing records. Caporal is something of a mid-tier challenge for the “Piranha,” but one that Piraev should be able to top. Given Caporal’s tendency to go the distance, it’s likely Piraev will have to settle for a decision here after using his boxing and sambo to outpoint Caporal.

A UFC Fight Pass broadcast is a great way to audition for the big leagues. Such is the case for Priscus Fogagnolo, one of a number of prospects on the Australian Fighting Championship 23 docket. The middleweight up-and-comer draws The Ultimate Fighter 11 alum Joseph Henle in a featured bout.

Fogagnolo has been rattling around the Aussie MMA scene on and off since 2005. After a debut win, he went silent for three years. In 2008, “The Tassie Devil” returned and won four straight fights, including a bout against UFC veteran Antonio Mendes. He suffered his first loss in a 2009 contest against future UFCer James Te Huna. Fogagnolo went inactive again, this time for two years, before returning to action and recording two more victories. After another four-year hiatus, Fogagnolo returned again with three more wins, including two in a single night. He again went dormant for more than three years before adding a win over UFC veteran Dylan Andrews in 2019. While his lengthy stretches of inactivity might seem odd, they can be attributed to his pursuits in other combat sports. Fogagnolo has won multiple judo championships at a national level, he’s a two-time national Greco-Roman wrestling champ, and he holds multiple Pan Pacific BJJ titles.

Henle made a name for himself on TUF 11, where he submitted Costas Philippou and lost to Seth Baczynski. He’s gone on to bounce from one promotion to another, with stops in Tachi Palace Fights, Canada’s MFC organization, the Resurrection Fighting Alliance, Combate Americas, and M-1 Challenge. He also recently fought on the undercard of Golden Boy Promotions’ Liddell vs. Ortiz 3 show. Of course, “Leonidas” hasn’t always emerged with his hand raised. He’s suffered losses to Elvis Mutapcic, Gabriel Checco, Mikhail Ragozin and Valery Myasnikov. Meanwhile, his most notable victories have come against Sean O’Connell, Luke Harris and Keith Berry.

Fogagnolo’s biggest impediment in the MMA world has been his inability to fully commit to a career in the sport. When active, the 36-year-old has been overwhelmingly successful. The well-rounded fighter has four knockout finishes and six submissions. His loss to Te Huna came at a time when Te Huna was making a strong run toward the UFC — he only needed one more win after the Fogagnolo fight to punch his ticket to the big show — and Te Huna even went on to a 5-1 start inside the Octagon. Henle is not on a similarly hot run, and he’s also not a 205-pounder like Te Huna.

Fogagnolo has a tough, but winnable fight in front of him. Henle has served as a test for emerging fighters like Mutapcic and Checco. The TUF alum could end up doing the same for Fogagnolo, who is likely to score a ground-and-pound finish in this one. Then, it’s just up to “The Tassie Devil” to take advantage of the small window of time left before he ages out of the sport.

Welterweight Maksim Davydov is perfect through 10 professional bouts, but there’s been something lacking in his competition. That will change when he headlines the fourth event from Strike Fighting Championship opposite Brazilian veteran Rubenilton Pereira. The two men battle for the league’s welterweight championship.

Pereira, a 28-fight veteran, has had a largely successful career. However, when things go wrong for him, they go disastrously wrong. Pereira has suffered eight career losses, and seven of those defeats have come during extended skids. After a 16-1 start to a career that began in 2010, the Brazilian lost four straight fights between 2015 and 2017. He righted the ship and put together a four-fight winning streak, but then hit another rough patch. He’s now lost three fights in a row, beginning with a decision loss to Roman Bogatov and ending with consecutive knockouts. Overall, the 26-year-old has five knockout victories and eight submissions.

Davydov’s first pro fight came way back in 2006. His sophomore appearance came in 2011. The 37-year-old only started fighting regularly in mid-2017, but he’s put together a strong run that includes four knockouts and six submissions. Much of Davydov’s competition has consisted of rookies or .500 fighters with only a handful of outings under their belt, but he has also met formerly undefeated upstarts Vyacheslav Kuznetsov and Yamil Guliev. His most recent opponent was 58-fight veteran Anatoly Safronov, who was six fights below the .500 mark when the pair met in September.

To say Pereira is a huge leap up for Davydov would be an understatement. The Brazilian holds the most combined experience and success of any opponent the Moscow native has seen thus far. Davydov’s another unusually old prospect who has a big test this week. He’s in a position where he can prove that he is for real. Pereira’s had his cage rattled a couple of times recently, which only increases Davydov’s chances of victory here.

Pereira’s a tough fighter who can stop opponents anywhere, but he also has a habit of crumbling against the best competition he’s met. The question is whether Davydov is a legitimate up-and-comer or all smoke and mirrors. The Russian is a decorated BJJ purple belt, and he’s fighting on home soil against an opponent who has had mixed results in Russia. Still, with Pereira likely determined to snap his skid, it’s tough to pick against the Brazilian. Pereira will expose the holes in Davydov’s game and finish the fight via TKO.