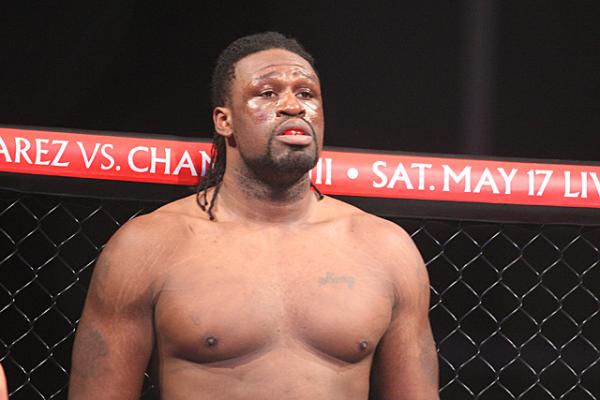 Chicago is known for a lot of things. The food. The arts. Sports. Public transportation. Sight-seeing. Those are the positives. There’s also the weather, the high taxes, the history of political corruption, and, more recently, the violence. From the far-out suburbs to the Loop, there are a lot of cultural differences depending on where one is in the city.

Legacy Fighting Alliance heavyweight Daniel James is a Chicago native, and he loves his city. He didn’t grow up in some suburban bedroom community, either. He grew up in the city, and his environment could have sent him down the wrong path in life.

“I grew up in a neighborhood that was labeled as bad. [You’re] not expected to make it out,” James told Combat Press. “It was hard, man. There was violence, bullying and everything else. Walking out your front door, you might see a body on the ground. You might see somebody getting jumped on or chased by the police, or, damn, somebody might be shooting at the police. That stuff put a lot of fear in my heart, and I said enough is enough. This is not the life I want. I don’t want to be a product of my environment. I want to be someone that can come and change it.”

James wanted to shape his own future.

“There’s a lot going on in Chicago,” he explained. “You got violence — a lot of gun violence and people being killed, kidnapped and things like that. But I think it’s just a lack of understanding for what life has to bring each individual. I get my inspiration and motivation by riding through my city and seeing what I can change. The scene in Chicago, I just think it’s not good for anybody to see that growing up, no matter where you’re from, what color you are, or what life you grew up in. Everybody has the chance to find a way out.

“I was always just a different type of kid. I set goals early in life when I was young, like 12 years old. I used to think about what I wanted out of life and how I could do it — how it would work out and how it would happen. I have brothers and sisters who I grew up with. We were good kids, and we always wanted different things in life. I wanted the things that most people in the community feel like they couldn’t reach.”

James wasn’t into the life of street violence, which is ironic considering what he ended up doing with himself. He was always into fitness, and that is the industry that now pays his bills. He worked on the road as a bodyguard for a while, but then he fell into mixed martial arts. The sport became his chance to inspire people in his community to lead a better life.

“I keep doing it because of the people around me, like my fiancée,” James said. “We always set goals for what we want, and we don’t give up on anything. We just take it for what it is, and we get into the process and just push through. We just enjoy the drive and what’s next. We enjoy thinking about what’s going to happen after the next big thing. It’s a drive we get from the things we do, and it inspires a lot of people.

“MMA is not just about fighting. I kind of changed the scene in Chicago with me using this platform of MMA. I inspired a lot of people by seeing me in the ring and on TV doing interviews. Everybody’s not going into the NBA or NFL, so I use this sport. It’s not just a fight. It’s martial arts that you can learn a lot from.”

Fitness and fighting go hand-in-hand for James. Both activities require weight control, training, and working out. These are the things he loves, and this is his profession. He fell in love with the process of training and getting ready for a fight. It just so happened that his passion manifested itself into something greater.

“Fighting for me is not just getting in the ring or the cage,” said James. “I want to earn respect, but in a more positive way. I don’t look to be feared. I think about what went on in my life when I was growing up and what goes on now in the city that drives me. I say, ‘You know what? Nobody in [my community] watches MMA.’ I don’t care if the UFC comes or anybody comes. When I got into the cage, I started to make an impact in my community. I go back to the community now, and it’s like, ‘That’s Daniel James. He’s a professional fighter.’ To the community, everything is UFC. So, when they see me, they say, ‘He’s a professional fighter.’

“Some people ask me to talk to their kids, and when I do that, I try to show them in the cage that this is what it’s about. I’d rather put the responsibility on my back for Chicago and to be the advocate and change things through fighting.”

If being a role model also means success in the cage, then James is doing a damn good job. The 37-year-old big man is 9-3-1 as a pro, and almost all of his wins have come by stoppage. His most recent win came in his second fight under the LFA banner, where he took part in the first round of a four-man heavyweight tournament. He was able to pick up the TKO victory over Patrick Martin in the first round. This led to the tournament final, which takes place on Friday night at LFA 77 in Prior Lake, Minn.

James is set to fight Brett Martin, who is now 8-1 as a pro after winning his own tournament semifinal in June. The Michigan native is giving up six inches in height and seven inches in reach, but he is an accomplished wrestler who has never been stopped.

“I saw a couple of his fights, and I actually went to his last LFA fight — the disqualification win over Renan Ferreira,” James said. “I actually wanted Brett Martin to win that fight, because he was the underdog and I like watching the underdogs. He’s a shorter guy, but he goes in and gets the job done. I don’t take nothing from another athlete who puts his all into it. I’m not the fighter to talk smack or anything.

“I don’t go out and be hesitant and wait for somebody to tackle me down. I don’t be hesitant and say, ‘Oh, I’ve got to watch for the takedown.’ If you want to go in and take me down and take the risk of me getting on top of you, you go right ahead. I’ve done that my whole fight career against every wrestler.”

The winner of the LFA 77 main event will be crowned the promotion’s heavyweight champion. Historically speaking, this usually leads to a contract with the UFC. That would be an ultimate goal for James, but he takes every fight as its own challenge. His biggest motivator is always to inspire others. With four kids of his own, he has plenty of motivation of his own.

“When I’m in the cage, my kids’ faces are always in the front of my mind,” James said. “Every jab, every cross, every kick, it’s got their face on it. Every punch means something about every one of my kids. They keep me going. Everything I throw in the ring is because of them.”

James has a very successful career as a fitness trainer at Reach Fieldhouse in Chicago. He runs multiple fitness programs, and he has a lot of clients. However, his career as a trainer will always be there. Tomorrow night, he has a grand opportunity to shine in the cage. With victory comes some gold around his waist, and it will get him one step closer to the next echelon of the fight game. That’s a lot of inspiration to bring back to his community.