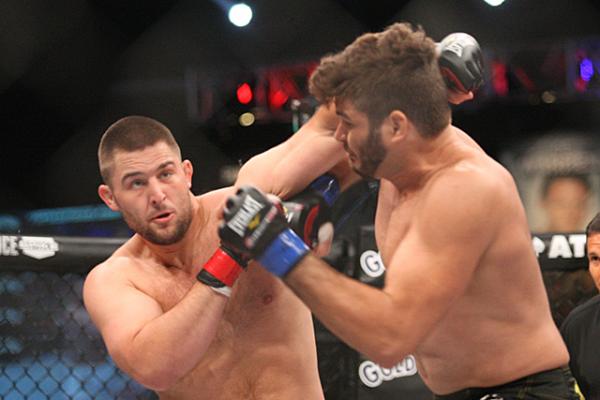 With a handful of exceptions, the work ethic of high school and college wrestlers is nothing short of legendary. Wrestlers learn from a young age the importance of working hard both in practice and competition, as well as outside of the sport.

Resurrection Fighting Alliance middleweight Austen “Corndog” Heidlage is the perfect example. Not only did his work ethic lead him into a 9-2 career as a professional mixed martial artist, but it has led him into a successful career as a construction contractor.

“I’m originally from Missouri, born and bred there, wrestled all throughout high school and won state, came up and started wrestling at University of Wisconsin-Lacrosse,” Heidlage told Combat Press. “We had Nick Thompson come in and start training with us for his Ben Askren fight. He kind of took me under his wing, and I never looked back.

“I’m also a full-time general contractor and stay on call as a local firefighter. It’s my own business, Heidlage Contracting. I’m basically a subcontractor, and I work with two or three different companies throughout the year. I do everything from drywall or masonry, to any other general work. I just kind of do it all.”

At 26 years old, Heidlage has more going on than most 40-year-olds. No matter what endeavor he engages in, one can be certain that he puts in his all. His moniker may not make this obvious.

“That’s a Nick Thompson thing,” Heidlage explained. “When I first started training, there was a gas station across the street from the gym. They’d all go over and get Gatorade and Powerbars, and I’d be the fat kid getting jelly beans, corn dogs and Slurpees. Apparently, you don’t get to choose your fight name, and he chose ‘Corndog’ for me.”

While it might seem easy to come up with some sort of MMA metaphor around corn dogs, Heidlage has fought like anything but a processed meat wrapped in dough. Of his 11 pro fights, not one has made it to the judges’ scorecards. His last loss was during his one and only Bellator appearance over two years ago, and his last three fights have been stoppage wins in various regional promotions.

“That Bellator fight was a last-minute fight on two weeks’ notice,” Heidlage said. “It was supposed to be to get my foot in the door, but then they came in with their new management and I got cut. Ever since then, I’ve been on a tear, trying to get back to the big shows. We’ve had other offers, but I’ve kind of been picking and choosing my fights.

“I fought an All-American wrestler three fights ago and put him down in the second round. [I] fought Cully Butterfield — his fight before ours was a co-main [event] for World Series of Fighting — and I put him down in less than 50 seconds. And then I just beat up [Eric] ‘Red’ Schafer, who is a nine-time UFC vet, and they threw in the towel in the second round. The last two were up a weight class, but now I’m back down to 185 [pounds].”

In his next outing, Heidlage will step into the cage at RFA 40 on Friday night to face former training partner Chase Waldon. While it isn’t ideal to fight a guy who has been a training partner for a decent chunk of Heidlage’s career, it’s something any two partners in the same weight class always know is an eventual possibility.

“It was offered to me by one of the local matchmakers, and we were in the awkward stage of figuring out all the management stuff, and we said we’re not going to do this right away,” Heidlage said. “We’re going to let [my manager] handle this. I talked to his coach and everything about it, and next thing I know we’re taking it. I think [Waldon] feels the same way.

“It’s just like any other fight. I’m going to go out there, do my thing, and we can still be friends afterwards. As soon as that cage door closes, it’s going to be on. I know that, he knows that, and it is what it is. We came up through the system together in the local circuit.”

Heidlage splits his training between Ironworks Training Center in Holmen, Wis., and Next Edge Academy in Sioux Falls, S.D., which is about four hours away. The split in training works well for him as he continues to progress his young career forward as a middleweight.

Heidlage’s last few fights were at light heavyweight, though, because he had all but cleaned out the middleweight division in the surrounding area. Now that he is on to the next step of his career, he has a broader range of opponents at middleweight. Heidlage walks around at 230 pounds, but he much prefers the lighter weight class.

“It seems like I have more trouble making 205 than 185, because I slack off a bit,” Heidlage explained. “When I focus on hitting 185, I just gradually work my way down. But I am by no means jacked. I have plenty of weight to lose still. If I really, really wanted to, I could make 170, but that would suck.”

For now, Heidlage is home at middleweight, and his sights are focused on his current opponent. However, every fighter has a dream of what comes next.

“Just like everybody else, I want to get that belt,” Heidlage said. “My personal goal is to win this fight, fight for the RFA belt, and maybe defend it once or so, and then challenge the Legacy titleholder. He seems to be a pretty tough little shit, from what I hear from everybody, and I think that would be a good title, just to do it.”

The “tough little shit” to whom Heidlage refers is Rafael Lovato, Jr. Lovato may only be 3-0 as a professional MMA fighter, but the Legacy FC middleweight champ is also one of the most highly decorated black belts in the history of Brazilian Jiu-Jitsu and is only the second American ever to win the Brazilian National Jiu-Jitsu Championship as a black belt. B.J. Penn was the first. That would be one hell of a fight.

For now, Heidlage is concentrating on Waldon. He’s already working 40-plus hours per week and is scheduled to be married in August. Throw in his training and his plate is plenty full. However, this is the level of work ethic one is to expect from a lifelong wrestler, corn dogs or not. At RFA 40, which takes place at the Mystic Lake Casino Hotel in Prior Lake, Minn., Heidlage will be ready to get through his old training partner en route to a title hunt.

“You can’t get to the next fight without winning the fight that’s in front of you. I don’t really have plans; I just do what they want me to do. I just signed with Dave Martin as my new manager, and he’s taken the reins on everything. My old manager, Eric Henderson, has done a great job, but we both felt like it was time to sign with somebody big.”

Heidlage would like to thank all of his coaches, training partners, family, friends, fans and sponsors.
Advertisement