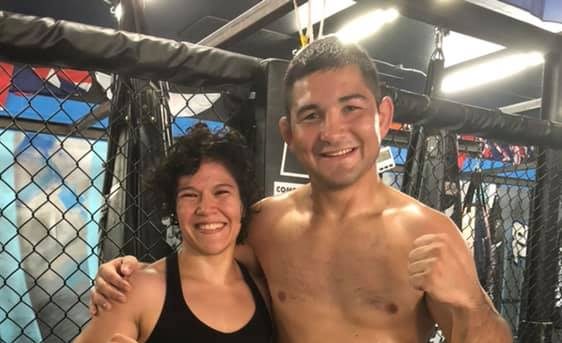 LFA 75’s Andrew Cruz: ‘When You Go Fishing, You Don’t Go for Minnows’

War changes people. How can it not? When you take a spring chicken right out of high school and throw them into real combat, there is a shock that goes through the system. Some take it well. Others, not so much. Regardless, combat veterans share experiences that some people cannot even comprehend.

Andrew Cruz joined the U.S. Army National Guard in 2009, right out of high school. After basic training, he was quickly deployed to Iraq near the end of the Iraq War. It was 2010, and he was only 19 years old. It didn’t take long to come under enemy fire.

“We had a lot of mortar attacks over there,” Cruz told Combat Press. “The first one was actually on Christmas Eve. It was weird, because it doesn’t seem real. Like, your heart starts beating real[ly] fast. I could feel my heart in my throat. The sirens go off in the bunker, and you take cover. We have these systems that shoot down mortars, and they start going off trying to shoot them down before impact. The first few mortar attacks were really scary, but it started to happen so frequently that we sort of lost sensitivity to it. Instead of running into the bunker, we were just strolling along, walking, like, ‘What are the chances it’s going to hit me?’ It was dumb, thinking back on it, because I could have got blown up.”

There were some interesting aspects to his service as well. For example, he drove an up-armored Chevy Suburban, flanked by Humvees. He also met some famous people.

“There was not very much sleep in between missions,” Cruz explained. “It was like go, go, go. We went outside the wire a lot and did personal security detail, which was a really fun job. We not only did security detail for, like, generals, we did, like, rock stars. We did Avenged Sevenfold. Toby Keith. Robin Williams, when he was alive, came with Lance Armstrong. We did our mission for them. We got to take celebrities and protect them in the red zone. It was a really cool experience. I had a great time.”

While Cruz was able to condition himself to mortar fire and potential IED attacks, it came with some baggage. War has deep-reaching effects on a person’s psyche, and he had to find a way to channel that into something that would help him cope after he got back home.

“Originally, I got into MMA when I was deployed in Iraq,” said Cruz. “I was having some problems at home, and things weren’t going well. My mind was just cluttered. I saw a sign up in the gym for an MMA practice. I went and checked it out, and it was the only time everything was clear in my head. I was just focusing on the moves and jiu-jitsu.

“We didn’t really know much. We had kickboxers and wrestlers and jiu-jitsu artists that were teaching, but we weren’t really training correctly. We’d put on the little gloves and beat the crap out of each other, but it helped me so much that, after deployment, when I got home, I was like, ‘I have to try one fight just to say that I did it.’ After that first fight, I was hooked. It went from, ‘I’m going to try this one time,’ to, ‘This is what I’m doing now.’”

“When I got there, I had already fought four of the guys who train there, so it was kind of an awkward period,” Cruz admitted, “but they took me in and have been a great family.”

Cruz was still an amateur when he joined SBG Idaho, but he finally made his professional debut in March 2015. He went 4-0, all by submission, in his first 17 months as a pro. Then, he dropped three in a row. Cruz has rebounded in the last year with back-to-back stoppage wins, the latest of which came in February against Drew Brokenshire.

“The last fight, I just overtrained my cardio, and I felt like I had superpowers, because I just wasn’t getting tired,” Cruz said. “It makes the fight a lot easier. The guy was 18-9 going into the fight, and I was only 5-3 at the time. I always try to fight guys that are really, really good, because you only have so many fights in you. You don’t know if you’re going to get an injury or something’s going to come up in your family life where you have to quit fighting, so the quickest way to the top is to fight the toughest guys. I ended up finishing in the third round by TKO.”

Things got quiet for about six months, but Cruz got a call in July from the Legacy Fighting Alliance. The promotion wanted him for a co-main event at LFA 75, which takes place on Friday night in West Valley City, Utah. It’s an opportunity for Cruz to fight live on AXS TV.

“I was at military school in Yakima, Wash., for the Master Fitness Trainer course, and my instructor called me up and said, ‘Hey, we’ve got a fight: Jon Neal,’” said Cruz. “I said yes, let’s do it. I checked my boxes and made sure I had work off and time off from the military. I had to make sure the big boss, my wife, was OK with it, because when I train, I work all day, come home for, like, a half hour and then I train all night and go to bed. I don’t see her when I’m in camp.”

Cruz’s opponent, the aforementioned Neal, is an 11-fight veteran who is coming off his first professional loss to Tyler Diamond in May. This will be Neal’s second fight under the LFA banner.

“I know Jon Neal is 10-1, but when you go fishing, you don’t go for minnows,” said the Idaho native. “You fish for the big ol’ trout. Hopefully, I can get my way on Friday and get that trophy.

“I’m only 5-[foot]-6. I don’t have that long of reach. I’m used to fighting guys that are way taller than me. I think he has some decent jiu-jitsu, but that’s kind of my thing — jiu-jitsu and wrestling. My striking has come a long way in the last couple years. As far as opponents go, I feel like I’ve fought a lot tougher guys in both my pro and amateur careers. I think I can gas him out. He seems like a nice guy, but we’ll see if it ends up being a jiu-jitsu battle on the ground.”

Cruz’s 6-3 mark is very deceiving. He has finished all of his wins, and one of his losses was a split decision against undefeated Vince Fricilone in King of the Cage. Cruz is no stranger to battle, so he is not easily shaken. If he can condition himself to ignore mortar fire in Iraq, then a regulated fight in a cage is not a huge concern. It always helps when his family has his back, too. His wife may not like what he does, but she’s not about to get between him and his dream to be a full-time fighter.

“She’s really supportive of fighting,” Cruz said. “She worries about me and wishes I would stop, but she also knows it’s my passion. It makes it very helpful to have your family behind you when you’re living out your dream.”

Of course, Cruz has other passions beyond MMA. He enjoys skateboarding and snowboarding, hanging out with his stepson, and riding dirt bikes with his brother. He will graduate from BSU with his Bachelor’s degree in criminal justice at the end of the current semester, but he has some work to do along the way. The next step is Sept. 6 in the LFA cage. He and Neal were originally slated for the co-main event, but they have since been bumped up to the headlining slot.

“All of my professional wins are finishes — five submissions and one TKO,” Cruz pointed out. “I don’t let it go to the judges. I’m a pressure fighter, so there’s always action. It’s not this picking apart, punch after punch. I don’t do that dancing-around stuff. I’m in there to fight, and 15 minutes is not that long. I go in there, and even if I’m up two rounds, I’ll try to finish it in the third round.”