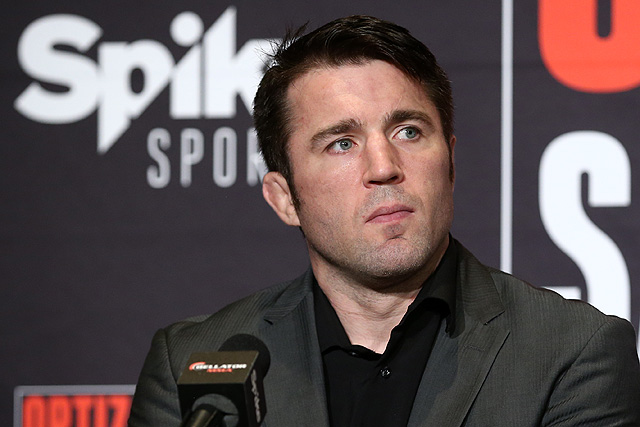 When Chael Sonnen steps back into the Bellator cage, he’ll not only look to prove that he’s a much better fighter than the one who fell to Tito Ortiz earlier this year. More importantly, when Sonnen steps into the cage, he’ll be looking to lay waste to a fighter who has bothered him for years.

Wanderlei Silva and Sonnen have beef. They’ve never fought each other in a professional setting, though. However, Sonnen has claimed that Silva jumped him in front of his wife in Brazil. Sonnen insisted during “Countdown to Bellator NYC” that once Silva did that, there would be no rules for him in a fight against Silva.

Even at 40 years old, “The American Gangster” gets it. As Bellator continues to turn the tide and gain popularity with every move, Sonnen has become the self-proclaimed king of pay-per-view. With his promotional actions alone, he will make this Bellator NYC card worth watching.

The fight may not be for a title. It may not feature MMA’s young and rising talent. Yet, it’s a grudge match, and it’s one of the best grudge matches in all of MMA. Sonnen has true dislike for Silva, and with Bellator headed to the biggest stage of them all, Madison Square Garden, there is nothing else needed but that hatred.

The card does feature three title fights, Fedor Emelianenko’s return, and plenty of rising talent, but Sonnen still gets the headlining spot. In the introductory press conference with Silva in Brazil via satellite, Sonnen referred to his opponent as a shoe, because that’s about as much as you could get out of him being at the presser. Then, when Bellator was supposed to have a press conference with Silva and Sonnen, it was canceled due to Silva suffering through an illness, although he recently stated that it was a lie and he made it up because he and Sonnen can’t be close to each other.

Coming off a loss to Ortiz, Sonnen said that he was defeated by the worst fighter there is and that just makes him even worse. Not only does he return to the Bellator cage looking to redeem himself, but Sonnen is looking to come in and put an end to a rivalry that has been years in the making.

Despite the amount of great fighters put on this card, none will carry the heat and aggression both verbally and physically the way Sonnen can. “The American Gangster” has never been here to do what’s best for others or to please anyone but himself. On June 24, he’ll once again prove that although the MMA game has changed, he hasn’t.

Sonnen will get back into the cage to once again face another man who crawls under his skin. In the history of combat sports, pure hatred can drive any fight to a whole new level. Sonnen’s clash with Silva will be exactly that — a fight between two men who hate each other. As Bellator makes its debut in New York City, the company has the right guy headlining.