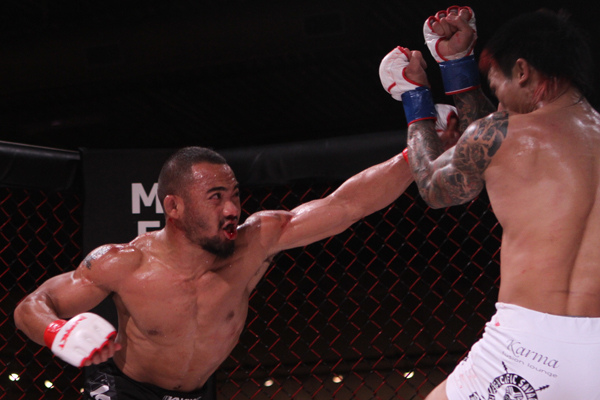 The Universal Reality Combat Championship promotion is making history when it takes the show out of its home base in the Philippines and lands in San Francisco. The company’s 29th offering, dubbed “Conquest,” is set to feature four title bouts. At the top of the lineup, flyweight kingpin CJ de Tomas puts his belt on the line against Bay Area fighter Derrick Easterling.

“Goldenboy” de Tomas is a rising Filipino star for the URCC. He made his pro debut in 2012, but he didn’t make his sophomore appearance until 2015. After winning his first six bouts, including four by way of stoppage, de Tomas challenged for the URCC flyweight gold. In April, he went five rounds with Japanese fighter Hideo Morikawa and claimed the crown with a unanimous decision nod. He returned to action in early November and scored a unanimous verdict over Alvin Ramirez to make his first successful defense of the strap. The 20-year-old has three submission victories and one TKO finish.

The 29-year-old Bay Area fighter Easterling has been at it since 2007, but he, too, has suffered through long periods of inactivity. After a 1-1 mark through two fights, Easterling fell off the radar until a 2010 return bout against Strikeforce veteran Anthony Figueroa. Easterling defeated Figueroa by submission, but didn’t return to action until another year and a half later. He defeated his next two opponents, but there was a three-year gap between the bouts. Easterling then lost to future UFC fighter Hector Sandoval before picking up another win in his most recent bout. His streak of three fights within one year is the most of his career. The Performance Fitness and MMA product has two submission wins and one knockout finish, but he has also suffered two defeats via TKO.

Easterling’s on-again, off-again flirtation with an MMA career is a big concern, but he’s found a better groove since joining Tyson Griffin’s Performance MMA camp. He has run into setbacks against various levels of competition, but he has not been finished in his most recent stint in the MMA world. His level of competition has been far superior to that of the champion as well.

De Tomas might have found success in the Filipino circuit, but he doesn’t even train with the best in his own country. Instead, he’s based out of a camp that bears his own name. He’ll be making a lengthy trip to fight on Easterling’s home turf. Furthermore, he’s tangling with a skilled grappler who has trained alongside UFC-caliber athletes.

De Tomas might be in for a rude awakening. Easterling’s record might not be an eye-catcher, but he’ll bring an entirely new level of abilities into the cage compared to the champ’s previous opponents. If de Tomas is the real deal, he’ll be able to overcome this challenge via a TKO finish or a one-sided decision. However, Easterling seems like the perfectly overlooked fighter who could hand the champ his first loss.

It’s no Amanda Nunes and Ronda Rousey, but Reality Fighting has two female bantamweights lined up to fight for a piece of gold. CES veteran Jessy Miele will headline the title tilt opposite RFA and King of the Cage vet Calie Cutler.

Miele is perhaps the more well known of these two ladies. “The Widowmaker” defeated Kaline Medeiros during her amateur days before turning pro into 2014. She stumbled out of the gates with a 19-second submission defeat at the hands of Andria Wawro in a Reality Fighting featherweight tussle. Miele rebounded with four straight wins, including bouts in which she handed Lissette Neri the first and second losses of Neri’s career. While still competing as a featherweight — this title fight actually marks her pro bantamweight debut — Miele encountered The Ultimate Fighter alum Peggy Morgan and suffered a decision loss. She rebounded with a submission win over an 0-1 opponent before coming up short in a title fight against top featherweight competitor Charmaine Tweet. The Underdog Brazilian Jiu-Jitsu and IMB Academy export has three submission wins and one TKO finish.

Cutler posted a 7-1 amateur mark before going pro in 2014. The 26-year-old won her first three pro fights before dropping a decision to the aforementioned Medeiros. “The Honey Badger” responded with a victory, but she then dropped back-to-back fights against Danielle Taylor and Jamie Colleen. The Jacked N Tan Fight Team product made her most recent appearance in the RFA cage, where she stopped Mariah Prussia via strikes early in the third round.

Other than her debut loss to Wawro, Miele has performed well against high-level competition. She went the distance with Morgan and Tweet, a pair of fighters who have appeared on the big stages of the UFC and Invicta, and she sent Neri packing on two occasions, including via a first-round submission in their first meeting. Cutler doesn’t have quite the same degree of highlights on her own 5-3 resume. Her biggest win came against Prussia, and she suffered losses against her other three high-level foes. Cutler went the distance with Medeiros, but she was stopped in the other two affairs.

Miele tends to step up to the challenge against all but the best competition she’s faced, whereas Cutler doesn’t appear to be quite as consistent. Miele could be in for a slugfest against Cutler, whose amateur run included plenty of finishes via strikes, but if she could last to the final bell with Morgan and Tweet, she shouldn’t struggle to make it out in one piece against Cutler. The same can’t be said of Cutler, who was submitted as an amateur and knocked out twice as a pro. Miele might have to settle for a decision, but there’s a good chance this one ends in a submission finish for “The Widowmaker.”

An unblemished record. Stoppages in his last seven fights. A lightweight championship. Jon Neal has plenty of accolades, but he’s out to add one more to the list at the 47th edition of SteelFist Fight Night, dubbed “High Intensity.” This time, the lightweight kingpin is out to add a title in a second weight class when he drops to featherweight to meet Tanner Cowan.

Neal’s start came in 2008 under the Total Mayhem banner, where he had his one and only trip to the judges’ scorecards against Eric Williams. While all legitimate fighter databases list Neal’s second fight as a 2011 victory over Fernando Corona, the Sherdog database credits Neal with a TKO victory and a TKO loss in 2009 while competing as an amateur. Regardless, Neal was stopping opponents in their tracks by the time 2011 came around. The 28-year-old recorded six submission wins and one technical knockout between January 2011 and May 2016. Among his victims, Neal submitted Utah regional circuit mainstays Curtis Johnsen and Scott Casey, as well as RFA veteran Jordan Clements.

The 34-year-old Cowan compiled an 11-2 mark while competing as an amateur. His only loss during this extended amateur run came via decision. The lightweight made his pro debut at the World Series of Fighting’s 10th show, where he suffered a 44-second knockout loss to A.J. Williams. He scored technical knockouts in his next two outings before dropping a decision to Kristian Nieto. The Utah-based fighter reeled off wins in his next four contests, but a TKO stoppage of Kelly Crofts-Johnson was overturned to a no-contest, leaving Cowan with a 5-2 overall mark.

Cowan’s in for a tough time in this title outing. Neal has stopped six of his opponents in the first frame, and he’s usually out to target his opponent’s limbs and neck. Cowan prefers to end fights with his fists. While Neal was knocked out by an opponent who went on to a sub-.500 mark as an amateur, that was a long time ago. Cowan will have to get the jump on Neal, who tends to be a quick starter. That’s not very likely to happen. Neal appears poised to move his unblemished record to 9-0 while also adding a featherweight crown to a mantel that already holds the promotion’s lightweight strap.