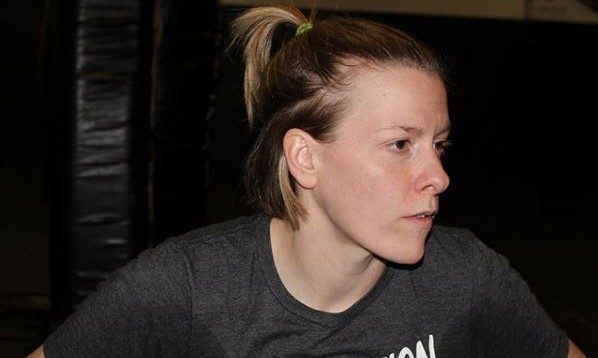 Almost all MMA fighters start with some kind of base skill set. Some start by wrestling in high school or college. Others switch from the 12-ounce boxing gloves to four-ounce MMA gloves. Some move on from the grappling mats. Others transition from kickboxing.

Heather Walker-Leahy began her journey not only by growing up in one of the most well-known fighting cities around — Philadelphia — but also by practicing one of the traditional martial arts: Muay Thai.

“I played team sports all my life, but after college, I lost the team aspect of sports and I got a little out of shape,” said Walker-Leahy, who graduated from Marymount University in 2010. “I started watching Muay Thai fights and decided to try it with a friend, just as an alternative workout.”

Walker-Leahy originally trained in just Muay Thai before deciding to embark on an MMA career, which required training other disciplines like jiu-jitsu and wrestling. This was when Walker-Leahy experienced her first challenge in trying to become a fighter.

“It was such a different adjustment,” Walker-Leahy told Combat Press. “There is nothing like grinding through a jiu-jitsu workout. I trained Muay Thai for five years, and it was a tough transition and a lot of frustration. I was just learning defense at first — like how to defend an armbar or how to defend a Takedown — but my Muay Thai clinch helped me with my wrestling. That awareness all comes from Muay Thai.”

Walker-Leahy made her amateur debut in 2015 and immediately experienced the frustration that can come with competing in MMA. Her first opponent was a pure grappler.

“I had only been grappling for only six months, and I spent a lot of time with my back against the cage,” Walker-Leahy said. “I couldn’t land any strikes, and I didn’t know how to get off the cage. That was the first thing I learned when I got back to the locker room with my coaches.”

Following an undefeated three-fight amateur career, Walker-Leahy made her pro debut in 2015 at Shogun Fights 19, which took place at the Theater at MGM National Harbor in Maryland. She achieved a unanimous-decision victory and then won her second pro fight in late 2018 via first-round TKO. The 32-year-old now returns to National Harbor for her third pro fight on Saturday, July 13, at Shogun Fights 22, where she faces Miranda Maverick. Maverick, who sports a 4-2 record, has spent her entire pro campaign with Invicta FC. Maverick is coming off a decision loss earlier in the year.

“I’m happy that Miranda has a lot of experience, and it’s been hard for me to find fights,” Walker-Leahy said. “This is a great test and a great platform for me to show my skills. I love that Shogun is so close to where we live, and having the local community there and their enthusiasm is so great. I had to travel for my second fight, and it was kind of a bummer. MGM is such a great venue, too.”

Walker-Leahy will have her wife, Cassandra, with her at Shogun Fights 22. The pair met in 2012 while Walker-Leahy was competing in amateur Muay Thai fights. Her wife has been to all of her fights.

Walker-Leahy resides in what used to be the pioneering division of women’s MMA: the 135-pound weight class. This was the home to such stars as Ronda Rousey and Miesha Tate, but those days are long gone.

“It’s hard with this weight class, because there aren’t many bantamweights out there,” Walker-Leahy said. “Even though it’s been a great experience so far, it’s kind of a dying weight class. I competed at a catchweight of 130 pounds for my debut, and that was a mistake.

“There are a lot of variables that I have to deal with that my male training partners don’t, like the fluctuation of our hormones or our cycle when it’s that time of the month. Female fighters have it harder, but if you do it smart, then you may not have the same problem. I train full-time, and I don’t really get heavy between my fights.”

Walker-Leahy’s time in the sport also causes her to embrace a certain kind of realism with her career longevity.

“I’m not sure how long I’ll do this, and I always said I would stop at 35,” she said, “but I don’t know why I picked that age. I don’t want to do this forever, but I respect those who do this all the time. Being a champion doesn’t have much value to me. But training and signing contracts to fight? That does have value to me.”