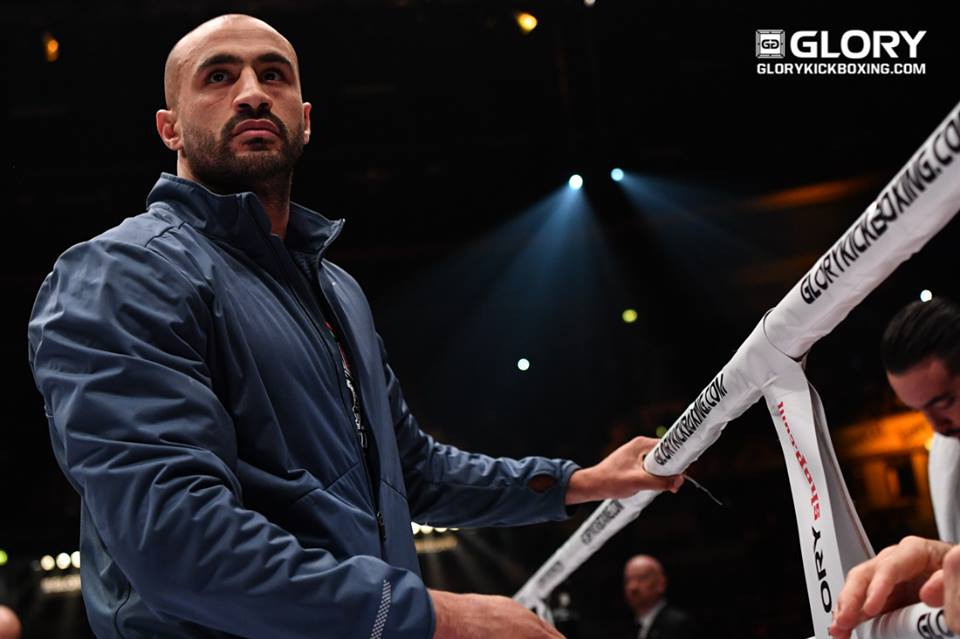 The event is headlined by a heavyweight rematch between the sport’s notorious bad boy, Badr Hari, and veteran Hesdy Gerges. The pair met previously under the It’s Showtime banner in 2010, with Gerges winning by disqualification after Hari kicked him while he was on the mat following a knockdown.

The main card also features a one-night, four-man welterweight contender tournament. In one half of the ladder, Aruba native Eyevan Danenberg clashes with Frenchman Jimmy Vienot, while Thailand’s Thongchai Sitsongpeenong takes on Argentina’s Alan Scheinson in the other side of the bracket.

Famed heavyweights Badr Hari and Hesdy Gerges will thrown down once again, this time in the main event with a potential future title shot on the line. Will controversy inevitably surround this bout again, or does one fighter put a definitive end to the rivalry?

The kickboxing landscape has completely changed since the last time these foes met for the It’s Showtime heavyweight title in 2010. In seven years, the collapse of K-1, creation of GLORY, and spread of kickboxing into China has molded the sport into an entirely different product. Unfortunately for the fans, long gone are the days of the golden era of the K-1 heavyweight grand prix. The heavyweight division has faltered greatly with the retirements of all-time greats Semmy Schilt, Remy Bonjasky, Ernesto Hoost, and top names moving on from kickboxing like Tyrone Spong, Gohkan Saki, Daniel Ghiţă, Peter Aerts and others. There has been one constant in the division over the past few years, the GLORY world heavyweight king Rico Verhoeven.

The biggest heavyweight clash in the past five years was the much-anticipated showdown between Verhoeven and Hari at GLORY: Collison in 2016. Despite all of his controversy through assault charges, prison stints, and a roller-coaster fight career, Hari remains the biggest name in the heavyweight division. No matter how you feel about his past and how the top heavyweight conducts himself in and out of the ring, there is no denying that Hari is still one of the biggest stars in the sport. It was a no-brainer to bring Hari back into the fold following his latest release from time served. Hari signed a multi-fight contract that will see him continue to grow in a division in need of a “name” to sell the promotion’s biggest and best events. Should Hari get by the always dangerous Gerges, Verhoeven will certainly be the name that most fans will be wanting him to fight next.

I have tempered my expectations of this particular match-up because neither fighter has looked their best in recent years. Gerges, a former top-10 heavyweight, has lost four of his past five fights. However, his defeats against Guto Inocente and Ismael Londt were contentious decisions. Gerges dominated experienced Czech heavyweight Tomáš Hron at GLORY 41 following a decision loss against the clear No.2 heavyweight in the world, Benjamin Adegbuyi. His most recent outing didn’t go well, however. Mladen Brestovac floored Hesdy Gerges with his signature head kick in less than a minute at GLORY 45. Only five months removed from that devastating knockout, there are questions of whether Gerges’ chin will hold up against one of the most prolific knockout artists in the division’s history. Lucky for Gerges, Hari has just as many questions coming into the contest.

Hari looked good at times in his bout with Verhoeven, but with only one win and two fights in the past three and a half years, what Hari will walk into the ring on Saturday night? Hari was winning the first fight with Gerges prior to his ill-advised, but not surprising illegal strike to a grounded opponent. That won’t matter with more than seven years between bouts. Hari proved just how good he was with massive knockout wins over Schilt, Saki, Zimmerman, Karaev, Bouzidi and many others throughout his career. Hari seems ready to put his past behind him and create a new beginning with GLORY. Gerges has the talent and ability to play spoiler and hijack Hari’s big-money fight. However, if Hari has done his work in the gym and worked hard for the victory, he should be able to edge out Gerges over three rounds.

The welterweight contender tournament features a mix of experience and young talent. Which welterweight makes the most of the opportunity?

Argentina’s Alan Scheinson returns to GLORY for the first time this year against former Lumpinee stadium champion Thongchai Sitsongpeenong. Scheinson lost his first two appearances in GLORY in short-notice bouts against former champ Murthel Groenhart and Karim Benmansour. The Team Hemmers product picked up his first promotional win against Sanda fighter Shanghai Gao at GLORY 46 in China. The 27-year-old is an aggressive fighter who has fought up to his competition in his prior contests. He holds 49 wins and just five losses in his professional career.

Thongchai Sitsongpeenong, 22, is an experienced Muay Thai fighter with a wealth of experience. The training partner of the current GLORY lightweight titleholder, Sitthichai, has picked up 136 wins and 46 knockouts during his lengthy career. Thongchai has spent more than half of his life competing in the ring and competed with some of the top talent in the Muay Thai and kickboxing world. Following back-to-back knockout losses to top-10 fighters Murthel Groenhart and Mohamed Mezouari, Thongchai re-entered the win column with a decision victory over Sun Weiqiang in his most recent outing at a Wu Lin Feng event last year.

Top flight French prospect Jimmy Vienot makes his second appearance in GLORY following three straight wins outside of the promotion. The former WBC world champion won a one-night, four-man tournament on Feb. 1 at All Star Muay Thai with decision victories over Adelino Boa Morte and Edye Ruiz. Earlier this year, Vienot took out Kunlun Fight veteran Serginio Kanters to kick off his current run. Following a disappointing loss to Alim Nabiyev at GLORY 47 in France, Vienot has a chance to potentially fight Nabiyev again should he win his second one-night tournament in about 30 days.

Vienot welcomes former FFC welterweight champion Eyevan Danenberg back to GLORY. The destructive Dutch kickboxer has won three of his four fights under the promotional banner including back-to-back dominant performances against Wellington Uega and most recently, Jamie Bates at GLORY 49. Danenberg has scored knockouts in half of his 26 professional wins with many coming by way of his body work. Following Danenberg’s victories over Uega and Bates, it was only a matter of time until he got the opportunity to work his way into title contention.

The tournament field is a good mix of fighters from different backgrounds and who bring different stylistic looks to their opening round bouts. Thongchai and Vienot mold their Muay Thai games to fit the GLORY rule set, which features very brief clinching, no elbow strikes, and no sweeps, trips or throws. Their opponents, Scheinson and Danenberg, are both well-rounded kickboxers who can pressure their opponents. Instead of matching the same style fighters together, GLORY matched the tournament to see a clash of styles that could lead to even better fights. Whichever fighters make it to the final will most likely be damaged from their prior bouts. Danenberg’s power and aggressive striking output make him the wild card in this tournament. However, expect a battle of Muay Thai fighters in the final with Vienot taking home the contender tournament crown.

Former GLORY welterweight champion Cédric Doumbé takes on top prospect Alim Nabiyev in what looks like a title eliminator. Will the winner earn the next shot at the title? Who wins?

Despite the heavyweight main event, the welterweight contender tournament, and the debut of Mohammed Jaraya, the welterweight showdown between Doumbé and Nabiyev is the best fight on the card in more ways than one. The fight has the greatest stakes on the card with the winner potentially fighting for the belt in the near future. It’s also the most well-matched bout at the event, which could lead to a very exciting, technical back-and-forth battle between two of the best kickboxers in the world.

Prior to the bout, Doumbé has stated that his championship fight decision loss to Groenhart at GLORY 44 changed his fighting style for the better. Doumbé is a defensively sound fighter who scores with quick, effective combinations while moving, shifting, and finding a home for his counter striking. The Frenchman vowed to be more aggressive and look for the finish heading into this contest with his sixth straight top-10 opponent. If Doumbé takes Nabiyev lightly, he could find himself in the same position that Nieky Holzken did in his loss. The former champion just couldn’t keep up with Nabiyev’s pace, which is nearly 15 strikes landed per minute in his GLORY outings. Nabiyev doesn’t have one-punch knockout power, but his pace and striking accuracy turns judges’ scorecards in his favor rather quickly.

The questions leading into the fight between these top-five welterweights make this fight even more intriuging. Nabiyev has queitly built his name outside of the bright lights of GLORY. The Azerbaijan native defeated many great fighters prior to his GLORY stint including Yohan Lidon, Chad Sugden, Zhang Yang, Sergeii Kuliaba and Vladimír Moravčík. We won’t know if he can put it all together again until fight night, but a win over the former welterweight titleholder would be Nabiyev’s greatest accomplishment. This bout comes down to the output of both fighters. Will Nabiyev keep the same output against a fighter who often makes his oppenents miss? Can Doumbé match Nabiyev’s pace in a three-round fight?

Most of the fans of this card are coming for the heavyweight showdown between Hari and Gerges. However, this fight features two of the fighters who will long be featured as kickboxing continues to grow around the world. Both have the tools to take home victory and the GLORY world title, but Doumbé will solve the puzzle that is Nabiyev.